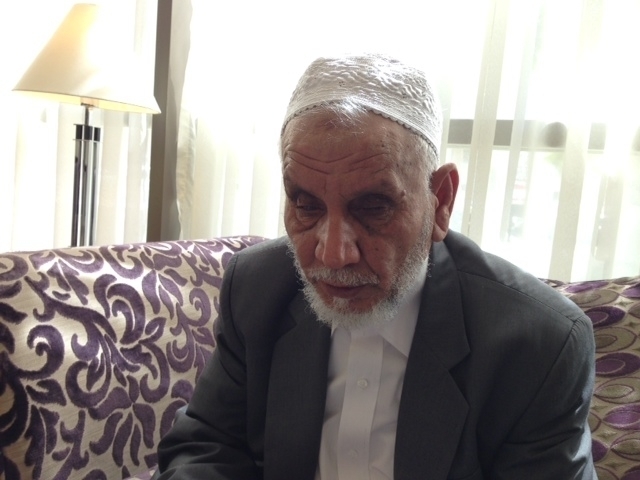 Ahmed Sayasneh, the most prominent Sheikh in the southern Syrian region of Deraa, confesses that he called for arevolution against the unjust Assad regime about 30 years ago. Because, as he says, “the injustice destroys everything in the country, and I haven’t denied my support for the followers of my religion inthe eighties, the Muslim Brotherhood.”Sheikh Sayasneh, who lost his eyesight in his childhood as a result of an untreated disease, is considered to be “among the sheikhs of the Syrian revolution against the regime of Bashar al-Assad,” according to descriptions from people in southern Syria.

The Sunni sheikh, who left Deraa more than 22 months ago, says“Since the very first moment when I ascended the rostrum of Al-Omari mosque in Deraa, I called for a revolution against the unjust regime. At that time, I believed, and still believe, that my words will not go wasted or unheeded. I do not have any interest except to support the people of my country and the followers of myreligion tosecure victory against this sectarian and authoritarian regime which violates the country and the people.”

The elder sheikh, who has good relations with all Islamic forces at various levels, adds, “Despite the many successes of the revolution, its condition is painfuland sad now. The world doesn’t understand—or let’s say doesn’t want to understand—our issue. We are passing through very difficult suffering, but God and our people will help us to achieve victory against the tyranny of Assad’s regime.”

Sheikh Sayasneh was among dozens of the notables of Deraa in the area of Horan who met Bashar al-Assad in the early months of the Syrian revolution after hundreds of people in the areawere shot dead by Assad's forces. Sayasneh described that meeting, saying “I said to Bashar, ‘you disappointed us, and didn’t treat our people as you should. Women, children, elders and men of Deraa were killed unjustly by your forces, and you haven’t even come to visit Deraa. Instead, you ignored the events that happened and haven’t mentioned anything about them to the people in the parliament. You ignored all the injuries, and your men were blocking the door to prevent people from meeting you. Your officers and soldiers insulted God in Al-Omari Mosque and said there was no God but Bashar.’ All he [Assad] said in reply was: ‘My speech in Parliament was directed to the outside world and not to the Syrians.Nonetheless, if you want the battle, no problem. We are ready for it.’”

Depending on the speech of the blind Sheikh, it doesn’t take much effort to discover that this propagandist “doesn’t believe in any issues or theories except [for his] religious thoughts.” But at the same time, he “doesn’t give any party the right to monopolize rule.”Sayasneh believes that the Syrian people have the right to “decide the form of the state and the ruling regime through the ballot boxes.”

Sayasneh says, “The Arab inspectors helped me to get out of Deraa on January 26, 2012.So I went to Amman and stayed there about a year, then I moved to Qatar, where I’m still living with one of my sons. What I want to say is that I read five sections of the Quran every day, and participate in all the revolution’s events. I’m not a Salafi, and I don’t belong to any organization like the Muslim Brotherhood, the Islamic State in Iraq and Al-Sham or Al-Qaeda,but I believe in Islam as a religionas well as a regulator for life. Islam is a main and fundamental part of our revolution, along with other components. That’s why I’m not one of those who say that what is happening in Syria is a civil war; the war is against theregime’s tyranny, which seeks to create tumult among the Syrians.”

Sayasneh continues, “We don’t have any problem with our Alawite or Shiite brothers, except those who have committed crimes, and all those who helped them—whether they are Sunni Muslims, from minorities, belong to Hezbollah or the Iranian regime, or are Communists or Nationalists.” The Sheikh, who denied that he is a Salafi, added, “We are not Takfiris or unbelievers. [Hezbollah Secretary General] Hasan Nasrallah says that he is fighting unbelievers in Syria. In fact, the unbeliever is he who describes us as unbelievers.”

When we asked Sayasneh whether he considers the jihadists as necessary for the revolution, or if they are imposed from abroad, the Sheikh of Al-Omari Mosque answered that “Jihad against the Assad regime and its gang is an obligation on everyone— Muslim or non-Muslim, the Syrians, and all people all over the world.”

As for Sayasneh’s attitude towards the Arabs and the international community, the Horani Sheikh believes that “their attitude is very weak, we don’t trust them. They said that they will help the Syrian people, but their help was insufficient when compared with the magnitude of the tragedy. Then they said that they will strike the Assad regime, but they didn’t. We don’t trust them.”