More than 120,000 people who live in this area west of Maarat al-Numan used to depend on the automated government bakery in Kfar Nabel, which has been unable to provide bread for over a year now 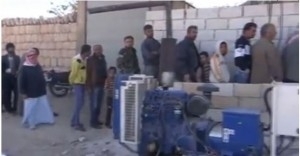 (Kfar Nabel, Syria) – In August, in the town of Kfar Nabel, around 50 people gathered one morning in front of Issam al-Dani’s corner store, which is licensed to sell government bread. The people massed there for almost two hours, dispersing only when the 48 year old informed the gathered crowd that the government bakery would not be operating that day. The same scene was repeated over the next two days, and continues to be repeated most days in the neighbourhoods and villages of the Maarat al-Numan’s western countryside.

More than 120,000 people who live in this area west of Maarat al-Numan used to depend on the automated government bakery in Kfar Nabel, which has been unable to provide bread for over a year now.

The countryside is under the control of more than 80 different armed opposition factions, some operating independently, like the Hawks Brigades, Fajrul Islam, Al-Nusra Front, and the Islamic State of Iraq and Syria. Other factions of the Free Syrian Army, like the Martyrs of the Syrian Revolution, the Knights of Truth, the Banners of Freedom and the March 15 Brigades, also operate there.

An employee at the automated government bakery in Kfar Nabel, who asked to remain anonymous, explained the bread shortages are caused by the fact that the granaries in the village of Sinjar in the South, about 35 km east of Kfar Nabel, have been under the control of armed clans for over a year now.

“These armed men have prevented our share of wheat from arriving at the mills in Saraqeb, which would then send us the wheat after it had been milled into flour,” the employee said.

He pointed out that before the crisis, the bakery used to process approximately 27 tons of flour every day.

According to Khaled al-Khatib, 45, head of the Council of Agricultural Engineers, the local council in Kfar Nabel, part of the national opposition coalition, has no solution to secure bread for the area at this time. He spoke of negotiations with the armed groups controlling the granaries in the nearby town of Sinjar in an attempt to obtain Kfar Nabel’s share of the grain from the government bakery.

“The area depends essentially now on the mill in Sanae al-Maarouf and the bakeries it usually supplies,” he said.

Wahid al-Aloush, 31, is one of the ten activists who form the Sanae al-Maarouf (Good Deeds) organization, whose relief work established the alternative mill about a year ago.

“We were forced to found this mill because of the continuous shortages of flour,” he said.

Hamza al-Hazzaa, 30, head of the Sanae al-Maarouf organization, told of how the mill received a 30,000 Euro grant from the French government about eight months ago, in order to expand and provide about half the flour for the western countryside of Maarat al-Numan. Hazzaa pointed out that the mill also receives some support from the Al-Sham Islamic association, and from anonymous individual donors.

Shadi al-Shakir, 32, the mill’s accountant, says the grants and support allow the mill to subsidize the cost of bread, making it more affordable for all.  he says the mill buys a kilogram of wheat at the market price of about 35 Syrian pounds (21 US cents).  The mill sells a kilo of flour at 30 Syrian pounds (18 US cents).

Shakir explained that the mill produces about 15 tons of flour a day, sold to three specific relief bakeries: the Al-Huda Charity Association bakery in the town of Kfar Nabel, the Jbala village bakery, supported by the “Alkher for Relief” association ,” which is headquartered in Turkey, and the Hass village bakery, which is backed up by the Hass Relief organization

According to Al-Shaker, the mill managers limit distributing grain to these relief bakeries, and until now, doesn’t provide to any others as it doesn’t possess the capability.

“It’s impossible for the mill to provide, even for these bakeries, the amounts they require,” he said. “But it can at least provide 60 per cent of its flour needs.”

He pointed out that the mill has also opened up over 35 jobs for people in the area.

Yassin al-Yassin, 35, who runs the Jbala village bakery, specified that the real cost of a bag of bread loaves, which weigh in at 1.1 kilograms, is over 70 Syrian pounds (41 US cents), but that, thanks to the sponsorship of the Sanae al-Maarouf organization, this cost is reduced to about 49 Syrian pounds (29 US cents).

“But we sell it for only 25 Syrian pounds (15 US cents), because this bakery is also sponsored by Alkher for Relief organization,” he explained.

As for the director of the Al-Huda Charity Association in Kfar Nabel, Sheikh Ibrahim al-Qassem, 33, and the head of the Hass bakery, Hassan al-Khalaf, 31, they are able to price a bag of loaves at their bakeries, also sponsored by the Sana’e al-Maarouf (Good Deeds) organization, at about 49 LS. The Al-Huda Charity Association sells a bag of bread at 50 LS (29 US cents), and any profits are channeled into the part of the association that looks after orphans, while the Hass bakery sells a bag at 45 LS, and the Hass Relief organization covers the loss.

In addition to the relief bakeries, there are three other private bakeries in the western countryside of Maarat al-Numan, but their role is secondary, since they rely on government flour, which they get only very rarely these days, or flour sold on the market at inflated prices, which is usually well over 60 Syrian Pounds per kilo.

There are also some families who manage to provide themselves with homemade bread, by using either market flour or the flour distributed by relief agencies and a tandoor oven.

The Damascus Bureau correspondent also gathered, from all the conversations and interviews, the role played by the price of diesel in raising the cost of producing flour: one litre of diesel costs sometimes as much as 150 Syrian pounds (88 US cents). The official price set by the Assad government in May 2011 was only 15 Syrian pounds per liter.

Musaab al-Abi, 30, a member of the local opposition group, Union of Revolutionary Bureaus, agrees, but complains about having to stand in long lines in front of these bakeries in order to acquire a bag of bread or two.  He also complains about the favoritism these bakeries show to armed men and military leaders.

“If you’re a militiaman, you don’t have to wait your turn,” he said. “You can pick whichever pieces of bread you like,” he said.