After the ceremonies in Montreux when the two Syrian delegations, Lakhdar Brahimi, and Jeffrey Feltman go to Geneva to negotiate, the urgent issues will be somewhere else 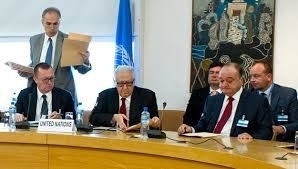 So far, the focus of the Geneva 2 is discussing issues that the circumstances of the conference will not permit, especially at the beginning of negotiations between the representatives of the Syrian government and the regime, as some urgent challenges will force themselves into the negotiations hall and delay the discussion of basic matters and roll them from the top to the bottom of the priorities list.

What is attracting attention in the current political talk is the problem of "forming a transitional government with full executive powers" to apply the statement of Geneva 1 (issued on June 30th 2012) and the role of president Bashar al-Assad in this transitional commission. The Syrian government announced that its delegation will take instructions from Assad, and that he "will stay in his position, whether other parties want this or not," during the transitional stage. [The government also says that] president Assad has the "right" to be a candidate for the new presidential term, which will start on July 17th. As for the opposition, some leaders say that Assad has "no role" in the transitional stage, nor "after it." Meanwhile, the allies of the opposition say that Assad has no role "in Syria's future."

The American-Russian agreement set a schedule to "destroy" Syria's chemical stockpile before June 2014, the date of the presidential elections that should be 60 to 90 days before the end date of the current presidential term, according to the new constitution. This schedule nullified the opposition's call for Assad to "step down" before Geneva 2. It also nullified the idea of "regime changing" and made the regime a partner in the international community and United Nations program to destroy the Syrian chemical stockpile. Practically speaking, it nullified the idea of [Assad] "stepping down" during the transitional stage, a request shared by some western countries and the Syrian opposition.

Thus, many are thinking of going back to an article in the current constitution stating that the term of president Assad can be extended for a specific period due to security circumstances and the lack of a political agreement on the transitional stage. Some talk about a year or two, depending on the transitional stage. But meanwhile, some Syrian officials insist on holding the presidential elections, and some regime supporters have already started an electoral campaign.

It is clear that Moscow and Washington have agreed on keeping both Syrian parties calm, both the regime and the opposition, to discuss the problems at the negotiating table, so that each side can say what it wants from behind the walls of the hall.

The third point is the problem of the "full powers." The opposition wants the transitional government to have full authority over security, and the army and judicial institutions, something that the Syrian government refuses. Syrian foreign minister Walid al-Muallem said few days ago that, "We tell the oppositionists who think that they will go to Geneva 2 to gain power: Stop dreaming, we are going to Geneva 2 to see which opposition parties reject interference in Syrian internal affairs, which [parties] reject terrorism, and which [parties] work for the future of Syria.”

On the other hand, the head of Syrian National Council, George Sabra, said, "When the regime and its allies insist on Assad's role in Syria's future, they put obstacles in front of Geneva 2, because his ugly picture cannot beautified after the massacres his troops committed against Syrian people."

There was talk that the opposition wants the national government to have executive powers over the economy and services, in addition to "concessions" in the judicial field and "reintegration" of some defectors from the "Free Syrian Army." Some talk about a possible compromise, so that security branches [would] be under the control of the transitional government and the army would be under the control of the president, with separation between legislative and executive authorities.

After the ceremonies in Montreux [Switzerland] on January 22nd, when the two Syrian delegations, the international envoy Lakhdar Brahimi and the United Nations Under-Secretary-General for Political Affairs Jeffrey D. Feltman go to Geneva to negotiate, the urgent issues will be somewhere else.

The first challenge to face the negotiations will be "a mutual acceptance" of everything, which will give the right for each party to appeal, and each will try to exhaust this right and politicize it so that the process becomes endless. But this "mutual acceptance" will give each of the American and Russian sponsors, who will be around in next door rooms, an opportunity to press their ally, especially that they both agreed on their "shares": the Americans are responsible of opposition's delegation and the Russians are responsible of governments one.

The principle of "mutual acceptance" was the compromise during the wording of Geneva 1, when there was an American request to include a text that "excludes those responsible for the bloodshed" from the transitional government, while the Russians refused the idea and insisted on launching a "political process led by Syrians," without any external interference.

This problem will have a major role, as the priorities of the two Syrian parties are completely different. Government officials (such as Walid al-Muallem) declared that the conference should focus on "the priority of fighting terrorism." Other officials suggested the "funding, training and sheltering of the terrorists should stop before discussing the political solution." Russian officials accepted this approach by stressing the necessity of "the union between the government and the opposition if fighting terrorism," and giving the priority to "the fight against extremists and terrorists." The Russian foreign minister went further by saying that "the western countries realize now the danger of extremists." On the other hand, the opposition announced that "the priority is for the political solution, and for the formation of a transitional government with full powers over security and the military institutions," accusing the Syrian government of "terrorism" and asking for the "withdrawal of all regime-supporting militias" from the country.

Between those points, an American official told a delegation from the opposition few days ago that the mission of the transitional government is "to prepare for the democratic change and to fight terrorism."

Light improvements in facilitating the delivery of relief aid have barely been achieved. Despite the Security Council resolution and the pleading to both parties of the conflict to facilitate the passage of aid to the people in need, the military conflict is going in the opposite direction. There is no serious talk about a comprehensive regional or local cease-fire. Rather, the conflict is becoming more violent as Geneva 2 approaches; regime forces have escalated their operations and opposition fighters are trying to confront the attacks and make some progress. Each party wants to enter Geneva 2 as strong and "victorious" as possible.

It seems that the American and Russian sponsors don’t mind that, as long as this doesn’t threaten the paths for transporting the chemical weapons outside the country in order to destroy them.

The military conflict will be present during the negotiations and before them. The fate of the negotiations will be related to what happens in the streets of Aleppo in the north, or in Damascus or in other regions. Any suicide operation in the regime's areas will make the representatives of the government press the opposition to join international condemnation against "terrorism." International condemnations of any shelling by regime forces will become the opposition's priority.

Thus, we can say that Geneva 2 will not be more than a media event, but it should launch a political process to be continued in Geneva 3 and Geneva 4. The conference will not achieve quick results, it will be a process that pushes the local, regional and international parties to think rather politically. It will be a turn back to politics under arms, after three years of regional and international conflicts, as well as the local revolution.

Politically, the results are related to the developments in the other tracks in the upcoming six months: the results of Israeli-Palestinian negotiations and the Iranian-Western negotiations.