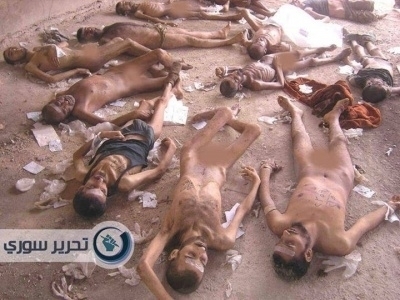 More than 55,000 photos and documents of naked, tortured and emaciated bodies have been released to the public by the Turkish Anadulo News Agency.

A defected Syrian soldier, who had worked for the government for 13 years, had been tasked with documenting the dead bodies of regime soldiers who had been brought from their places of detention to a military hospital during the civil war, according to the news agency.

The Syrian ‘TahrirSouri’ group claimed 10 days ago that it had obtained a rare photo from a security agent, who defected from state security branch 215 during the Syrian uprising, which showed a number of naked and skeletal bodies, which appear to have died of starvation.

The bodies brought to the hospital were all those of detained Syrian opposition members, which showed signs of starvation, brutal beatings, strangulation and other forms of torture and killing. It has became routine for the military to photograph the bodies and faces of people in detention after designating them with a 'numbering system.'

These images, which have handwritten codes on each dead body or face, have been accepted as “documents” of the systematic torture and killing of people under the “execution orders” of the Syrian Army.

Some within the military police, having taken 55,000 photos over two years, have become fed up with the policy of killing by torture, and have built up secret contacts within the Syrian opposition.

Therefore, some military police regularly recorded and sent copies of these photographs to a trusted contact using a 'flash drive' (memory stick).
With assistance from the Syrian opposition, an inquiry team of international lawyers has been established, which includes forensic medicine and forensic imaging experts, who have vast experience in the prosecution of war crimes, crimes against humanity and other crimes contrary to international law.

The team includes the former lead prosecutor of in the International Criminal Tribunal trial of former President Slobodan Milosevic of Yugoslavia and prosecutors and lawyers for the Special Court for Sierra Leone.

The images were uploaded directly to a secure server at a laboratory in the UK for assessment as to whether the photos were accurate or not and it was confirmed to the inquiry team that none of the images were digitally altered.

Based on the material, it was revealed that there is clear evidence of the systematic torture and killing of the people photographed, many of whom were tortured while their limbs were tied, or strangled with cable ties.

Another clear conclusion of the inquiry is that starvation was used as a method of torture.

The team has estimated that there are some 55,000 images of some 11,000 detainees who have been tortured and killed by regime agents since the beginning of the uprising in March 2011.

Members of the team have also heard evidence from the defected military contact and concluded that the material is “clear evidence”, which could be believed as fact in a court of law.

The military defector, who has surely carried out one of the most intriguing jobs in the world, has been codenamed “Caesar” for his own safety.