A legal, registered marriage between two Syrians on Lebanese soil requires the completion of several bureaucratic procedures and the presentation of various forms of identification 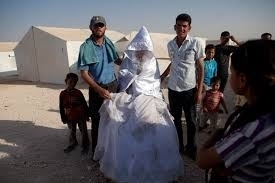 Maher, 25, sits next to his 22-year-old fiancée, Nour, in a small room in a home in the Shatila Palestinian refugee camp. They are both Syrian refugees in Lebanon. Nour’s father sits across from the young couple next to two other men. The men were brought in as witnesses by the cleric mediating the session, who is busy filling out forms for the couple on a paper with the following heading:

As soon as the cleric finished transcribing information from ID cards and listing the names of the witnesses, he asked the young Syrian man and his fiancé’s father to hold hands and repeat his words. Maher and Nour were then husband and wife, “in accordance with Allah and the teachings of His Prophet,” said the cleric.

Many such informal marriages, commonly known as customary or external marriage contracts, take place among Syrian refugees in Lebanon. Reasons for such marriages include poverty, ignorance of legal procedures for marriage, or the absence of identification papers. Such marriages may lead to the exploitation of female refugees or to unregistered new-borns with all the attendant legal and social problems that may entail in the future.

Maher had to marry through an external contract because of his “illegal” status in Lebanon, as he put it. He was smuggled in after being pursued by Syrian security forces for participation in opposition activism. Today he is attempting to gain asylum in a European country so that he may later register his marriage legally. He has no answer for Damascus Bureau’s question on alternatives should he not be granted asylum.

Ali, 22, married 21-year-old Bushra on February 11, 2013 in the same manner as Maher and Nour. However, the couple had fled the city of Maarat al-Numan in the Idlib province and registered their marriage in the Sunni religious court in Beirut ten months later on December 7.

“Financial cost and fear of dealing with any government institution because I am wanted in Syria led me to marry through an external contract,” Ali told Damascus Bureau. He later registered his marriage when his wife became pregnant.

A butcher by trade, Ali says that registering his marriage cost him 122,000 Lebanese liras (approximately 82 dollars), whereas the external contract had cost him 50 dollars in fees for a cleric named Sheikh Saleh Azzouka. Ali added that the fee is usually $100 dollars, but he received a discount because he knows the Sheikh personally.

Waad, 21, and her husband share Bushra and Ali’s experience. Initially, they were married with an external contract by Sheikh Usama Shihab in October 2012 before registering their marriage in Beirut in July 2013. Waad, who used to be a student at the Business Institute in Idlib before she fled the country, said that her marriage was eventually registered for the sake of the child she had given birth to.

“We resorted initially to the external contract because of our limited financial means,” she said.  “We had to borrow money to secure the 135 dollars needed to register the marriage in court. The external contract only cost the box of sweets we brought for Sheikh Ussama who did not accept any money for his services, and even admonished us for trying to pay him.”

A legal, registered marriage between two Syrians on Lebanese soil requires the completion of several bureaucratic procedures and the presentation of various forms of identification, from passports with a valid visa to IDs certified by the Syrian foreign ministry. It also requires court-certified processing by the area’s mayor and blood tests for the couple accompanied by a specialized doctor’s report after which they may proceed to court to have their marriage certified by a judge. Then their marriage is registered at the census information office after being certified by the Lebanese foreign ministry. Finally, the marriage is registered at the Syrian embassy in Beirut so that the couple may obtain a family identification card.

This entire process costs between 250 dollars and 400 dollars according to a number of Syrians who married in Lebanon recently.

Aisha, 17, married 34-year-old Lebanese citizen Mohammad al-Wady a year ago with an external contract. The young woman fled the village of Kfar Hamra in the Aleppo suburbs and still has childlike features despite having given birth to her first son Khaled just weeks earlier. The infant has not yet been registered with the Lebanese authorities.

Wady is a plumber by trade, but his perpetual unemployment is the reason why the couple have not registered their marriage or child. Wady blames his unemployment on the abundance of cheap Syrian labour in the Saeed Ghawwash refugee camp on the outskirts of Beirut where he lives.

Wady says that the informal marriage contract cost him 133 dollars, while an official marriage would cost a Lebanese marrying a foreigner approximately 500 dollars. This amount also includes Lebanese General Security procedures that entail an investigation about the goal of the marriage.

Non-official marriages are also widespread among Syrian refugees outside of Beirut. The Syrian refugee camp in the Marj region in the Lebanese Bekaa valley houses around 350 Syrians. In the past few months, more than 10 marriages took place. According to Mohammad al-Shaher all of them were done with an external contract. Shaher is the camp’s “shaweesh,” a position created by the camp dwellers that resembles that of a mayor. Shaher told Damascus Bureau that none of the marriages he has seen in the camp since its inception more than two years ago were conducted through official channels.

According to several activists who work with Syrian refugees through individual initiative or humanitarian organizations, marriages through an external contract are common among Syrian refugees whether they are in the Bekaa camps, Tripoli, Beirut or other areas.

A report by Alaan TV station that aired on December 7 exposed the exploitation of Syrian girls after their marriages to young Lebanese men. The men would divorce them without registering the marriage, which meant that the marriage is not officially recognized and the children resulting from the union were not registered.

Sheikh Saleh Azzouka refused to meet with the Damascus Bureau correspondent who visited him at the Hajj Mohammad al-Dana mosque in the Sabra refugee camp, and denied having anything to do with marrying Syrian refugees. However, the correspondent witnessed and photographed two marriages by external contract conducted by Sheikh Azzouka in the Syrian refugee community. The sheikh received a fee of 100,000 Lebanese liras each time (approximately 67 dollars).

“This was based on a request by the Sunni Court in the Tareeq Jdeedeh neighborhood after we were told that these marriages could create problems,” Shihab explained. He added that before he stopped, he used to marry approximately one Syrian couple every one or two days since the big influx of Syrian refugees began in 2012.

“The customary contract is forbidden because it undermines the rights of the wife. In addition, you cannot register children if the marriage is not officially confirmed. If one spouse dies, the other does not inherit until a family ID is produced that proves a marriage bond,” said

Mohammad Assaf, a judge in the Sunni Court in Beirut.

Assaf said that he had issued a warning to Azzouka to stop conducting external contract marriages due to the problems that arise from such a union.

Sabah Hallaq, a trainer at the women’s rights organization Enough Violence and a board member of the Syrian Women’s Association, says that customary marriages are not considered a priority area for organizations working with Syrian refugees in Lebanon.

Georges Talmas, project manager at the Basma Wa Zaytouna (Smile and Olive) organization located in the Shatila refugee camp, agrees with the assessment that Syrian NGOs working in Lebanon neglect this issue. However, he adds that this neglect is not purposeful, since the large number of Syrian refugees in Lebanon leads to some issues being overlooked in favour of providing everyday necessities and basic services.