Father Frans, a Jesuit, arrived in Syria in 1966 after spending two years in Lebanon studying Arabic. 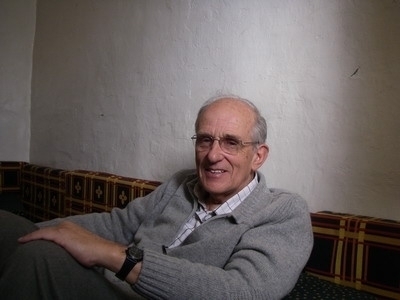 There is little food or hope left in Syria's besieged Old City of Homs. But an elderly Dutch priest has remained there in solidarity with the Syrians he considers countrymen.

Father Frans van der Lugt has spent nearly five decades in Syria, a country he loves so dearly that he considers it his own, although he was born in The Netherlands.

Despite crushing hardship in Homs, where residents face a daily struggle to find food and the Christian population has dwindled to a few dozen, the thought of leaving could not be further from his mind.

"The Syrian people have given me so much, so much kindness, inspiration and everything they have. If the Syrian people are suffering now, I want to share their pain and their difficulties."

Father Frans, a Jesuit, arrived in Syria in 1966 after spending two years in Lebanon studying Arabic.

At 75, his eyes still sparkle behind his glasses as he talks, and he smiles as he describes his relationship with his adopted home.

But he describes soberly the suffering of the estimated 3,000 people left in Homs's Old City, under a suffocating army siege and daily regime bombardment.

"We've gotten to the point where we're eating air."

He said residents scrounge what they can from the remaining vegetation in the area, but the situation is desperate.

"We have very, very little food, and after a week or two or three, we'll have nothing," he said.

"The faces of people you see in the street are weak and yellow. Their bodies are weakened and have lost their strength.

"What should we do, die of hunger?"

The Old City of Homs was at the centre of discussions between the Syrian regime and opposition at peace talks in Geneva last week.

But while the regime offered to allow women and children to leave the area, there was no deal on the exit of men, or the entry of aid into the city.

"We want to eat and we want aid to come in, but we also want a way out," Father Frans said.

"There is hunger here, but there's also hunger for a normal life… A human being is more than just a stomach, he has a heart too and wants to see his loved ones."

The harsh conditions have whittled away the Old City's population, and left many of its buildings including mosques and churches damaged beyond recognition.

Tens of thousands of Christians once lived in the area, but Father Frans said just 66 remain.

"I am the only priest and the only foreigner left," he said.

"Although, I don't feel like a foreigner, I'm an Arab with the Arabs," he added with a smile.

He lives in a Jesuit monastery, where a widow cooks for him, and he does what he can for the poorest families of the neighbourhood, Muslim and Christian.

"I don't see people as Muslims or Christian, I see a human being first and foremost," he said.

"The worst part about the situation we're in now is that we can't help those who are in need."

Father Frans said medical aid was desperately needed in the city, where the medicine that is available has expired.

And the damage to homes is so great, he said, that a return for most residents would be impossible for now.

The situation is a far cry from the grand hotels in the Swiss towns of Montreux and Geneva where the Syrian regime and opposition fruitlessly discussed Homs's plight.

"They talk and meet in restaurants and hotels, but what we're living through here is so far removed from how they're living," Father Frans said.

Electricity cuts are constant in the area, forcing the elderly priest to relocate three times during his interview with AFP as the laptop battery drained.

"They talk about us, but they don't live with us," he said.

But there is no trace of bitterness in his voice, and he insists that both regime and opposition must find a way to trust each other.

"If there is trust, then the negotiations will be productive. If there isn't, they won't succeed whether they're held in Geneva, Paris, Honolulu or London," he said.

"We have to assume that there are positive things about the other," he added.