Members of the Local Council were elected by several of the city’s activists on July 2, according to a structure devised by a group of local intellectuals 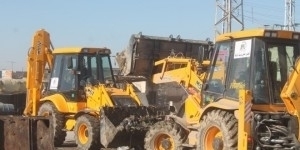 In late November dozens of volunteers wearing blue suits and white helmets roamed the streets of the city with cleaning supplies, distributing garbage bags in a scene that appeared strange after months of no sanitation services. They began volunteering with the Local Council of Raqqa City after it launched a clean-up campaign at the end of November, which lasted for several weeks and covered a number of neighbourhoods.

Members of the Local Council were elected by several of the city’s activists on July 2, according to a structure devised by a group of local intellectuals. They invited 600 activists from various groups and unions in the city to vote, but only around 180 showed up, which stirred commotion about the legitimacy of the council and pushed several people to call for its dissolution. Nevertheless, the council continued working and was one of the first to be elected inside Syria, according to Taha Omar, the council treasurer. Elections were held three months after the last council disbanded itself in preparation for new a new one.

“There was a delay because there was no adequate alternative, and the previous council did not have enough financial support from the coalition or from donors,” explained Abdelsalam Ham Sourk, the vice president of the current council and a member of the emergency relief committee of the previous one.

A month after its establishment, the Local Council had established seven different offices, three of which are responsible for emergency relief, electricity, and communication services. Another office produces reports on the council’s projects for donor agencies.

The council did not begin implementing projects until September due to a lack of funds, explains Taha al-Sayyid Taha, the head of the Local Council.

“The nature of the projects approved by donor agencies were small and short term,” he said.

However, on November 1, 11 medium and long-term projects were approved, such as the city clean-up project, which lasted for six weeks. Another approved project aimed to completely renovate five schools.

Despite the lack of funding, council members say they refuse to collect money from residents for electricity and municipal services. Taha notes that the Islamic State in Iraq and Syria (ISIS) receives 400 Syrian liras (around 2.7 US dollars) for each phone line every two months from residents and businesses alike.

“Bill collection would be our last resort, and only provided that it be organized and conducted in a way that leaves no room for suspicion or accusation of theft,” he said.

The medical office of the council is one of the more fortunate offices. Mohammad Hdayban, the head of the Local Council’s medical office, said he and his colleagues obtained two fully equipped ambulances in August, followed by another two and 20,000 dollars for the Raqqa National Hospital in September. They did this with the help of the Support Coordination Unit of the opposition Syrian National Coalition (SNC). The latter was not the only donor, however.

“In the last two months we were able to procure equipment for 1,400 kidney dialysis sessions through the coalition,” said Hdayban. “Many of our other projects were funded through non-governmental donor agencies such as Chemonics, which supported the repair of seven ambulances for the hospital.”

Chemonics now funds a project to renovate a number of schools in Raqqa.

The Local Council of Raqqa has not yet communicated with the transitional government formed by the SNC on November 12, 2013. Taha explains that the council does not want to get involved in any political disputes. He believes in working within Syria and not outside it, although he hopes that this government empathizes with the suffering inside the country and that those outside, whether expatriates or donor organizations, offer the help they can to the Syrian people.

Hdayban explains that his office’s lack of communication with the transitional government is due to the fact that the Ministry of Health has not yet been formed. His contact is currently limited to the medical office of the Support Coordination Unit.

“I wish the temporary government well. But in case they we do not get any support, will the government be up to the task?” asks Hdayban pessimistically.

Three militant Islamist groups controlled Raqqa until mid-January: Ahrar Al-Sham, Al-Nusra Front, and ISIS. Currently, ISIS controls the city after its victory over the two other militias. The Local Council halted public works during the battle then resumed them on January 16.

Since militias took control of the city on March 4, 2013, they have interfered in the provision of services such as electricity, water, phones, and sanitation.

“But they haven’t obstructed the work of the Local Council yet,” said Taha. The Local Council and the Salafist militias joined efforts to repair phone and water lines as well as electricity transformers that were damaged in the shelling by regime forces that targeted the Cardamom Souk in the city centre in November.

The Local Council provides food and medical aid in collaboration with the Support Coordination Unit, the Syrian Business Forum, and other organizations. To date, 2000 medical baskets were distributed to refugees who hail from different provinces, particularly those living in the makeshift camps that have mushroomed since the regime took control of the Safira and Sakhna areas close to Raqqa.

The Local Council collaborates with civil society organizations that support its campaign to shut down the makeshift camps and replace them with refugee shelters.

“The Free Youth Assembly of Raqqa is working as hard as it can,” said Abdallah al-Sham, a board member of the Free Youth Assembly of Raqqa. “The council itself emerged from activists and civil society organizations. It is their sole legitimate representative. It is therefore imperative that we support the council, particularly as it works hard to secure the city’s needs.”

A group of activists signed up for the civil defence training course launched by the council on December 15. The point of the class is to train civil defence teams on responding to disasters and shelling, and conducting rescue missions, among other things. However, the council cannot change much in terms of the security situation.

“The council cannot have a police force without it becoming a military or political player,” said Dr. Bassam al-Sa’eed, the director of the council’s civil defence office.

The council does not interfere in matters such as the judiciary that are within the purview of the Sharia Committee, a body comprised of judges, civil servants, and representatives of Ahrar Al-Sham, Al-Nusra Front, and the Islamic State in Iraq and Syria. The committee represents the real security force on the ground, and as such it is the authority that grants operating licenses to relief and service organizations, and not the local council.

Despite these limited powers, engineer Hodaib Shehadeh, a member of the previous local council, is optimistic. For Shehadeh, the fact that the majority of current council members are young revolutionaries who care about the service sector outside of the political domain has created a harmonious coordination between them.