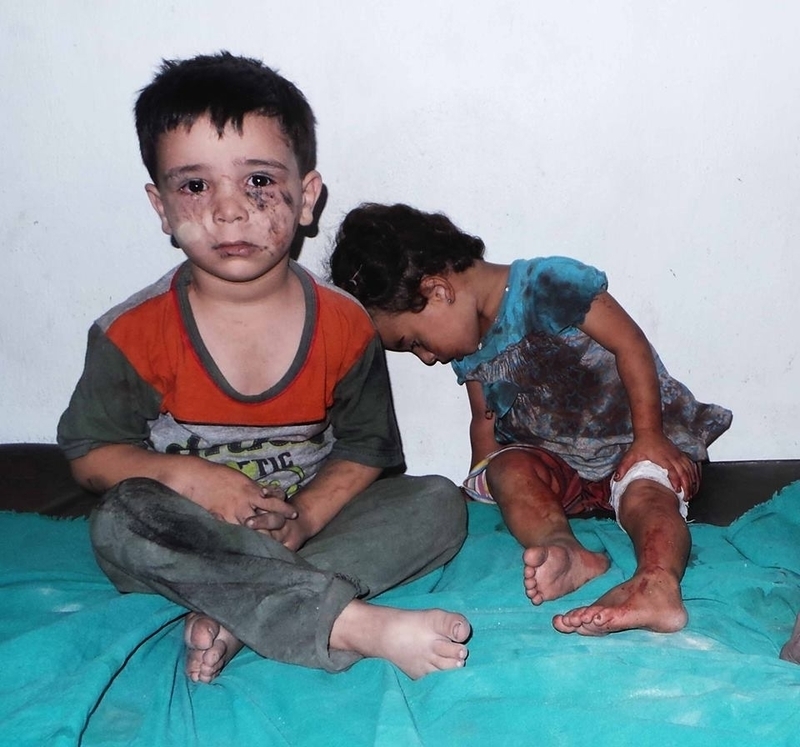 Abu Hesham is a fifty-seven year-old from the town of Arbeenin in the Eastern Ghoutah region of the Damascus countryside. He used to hate politics, politicians’ talk, and the news, because they are nothing but lies. But he has changed his ways and now follows the Geneva II conference on Syria. Abu Hesham has lost his boys, one of whom was 34 when he was arrested by the regime because he participated in the demonstrations about two years ago. A few months ago, the other two were martyred along with 56 members of the Free Syrian Army for trying to bring flour to the civilians in the Qalamoun area.

In this hard time of siege, hunger, and destruction, Abu Hesham does not know how to feed his sons’ eight children and the four women. He had an average income and his children had been working, but he lost everything. His grandchildren and the women suffer acute malnutrition, and he has a kidney disease that needs continuous dialysis, for which he can no longer be treated since the medical center closed due to lack of electricity. One of his grandchildren joined a battalion as a way to bring money to the family.

Abu Hesham saved up some money to buy batteries for the old radio to follow news from Geneva II—the conference that would end his tragedy, as he heard. He wanted to know all the details, when his son would be released, when the siege would be broken so his babies could eat enough, and when the shelling would stop.

He was listening to the head of the Syrian Opposition Coalition’s speech, shaking his head, confirming every word. He raised his hand, praying “God be with us.” But when the [Syrian] foreign minister spoke, Abu Hesham cursed the hypocritical liar and his regime. Abu Hesam’s eyes shined with hope while his hungry babies gathered around him, hoping that the conference would result in bread, eggs, fruit, and peaceful nights.

The family’s engagement with the conference was noticeable despite the silence. They awaited conclusive results, for them it was a ray of hope.

The first round of the negotiations between the coalition’s delegation and the regime’s delegation, under the supervision of the United Nations and many other countries, has finished, but there was no fruit, no bread, nor eggs in the basket.

The radio was on Abu Hesham’s ear for the whole week. He listened to the news and the sound of the barrels exploding. He screamed loudly “There are fifty barrels!” Has the regime defeated all the countries at the conference, are these the results, he wondered.

Mouhamad Adumany is a doctor who witnessed with his own eyes the regime’s crimes during the three years of the Syrian revolution. He has been following the Geneva conference since it was first suggested. He wrote his analysis and opinions on his Facebook page. He was encouraging participation in the conference, and he saw that there would be a political solution to stop the sound of bullets. We met Dr. Mouhamad after the end of the conference’s first week. He said “There is hope. Nine hundred days of bullets and fire, and we had not realized the revolution’s goals, how can some people think that a week would be enough?”

He added, “So many rejected the Geneva conference, but looked forward to it. They hoped that it would be the solution, whether they said it or not. People waited for the results because they are exhausted.”

The doctor saw that the conference did not fail. Rather, it brought back the idea that the Syrian case is a revolution. It exposed the ugly face of this regime and its crimes, and changed the world’s view towards the Syrian situation: that of a people being slaughtered by the regime. But Dr. Mouhamad confirmed that the Syrians need a real international stance. “We are not disappointed with our delegation to the conference. But, as usual, the international community had disappointed us.” He repeated the words of the Coalition leader: “Our time was and continues to be made of blood.”

Fatimah, thirty-eight years old, is not far from the event. She is a martyr’s wife, a martyr’s mother, and the sister of someone who’s been arrested. She looked at us with contempt when we asked her about her thoughts on the conference. She replied in one sentence, “Those who have been watching us get killed for three years will not be moved now—damn them, and their conferences, they will not do anything for us.”

Yahya is a fighter in the Free Syrian Army and a third-year student at the College of Engineering. He has left his studies and joined one of the battalions. He has never believed in conferences, nor in the international community’s desire to find a solution to the problem— the same international community that has remained silent about all the killing of Syrians. Yahya said, “Nothing will stop this criminal but weapons, tell them to send weapons to us.”