At the beginning of 2014, the number of Syrian refugees in Jordan increased to 1.3 million 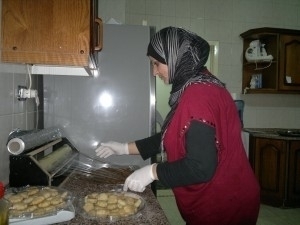 Many Syrians in Jordan insist that they are only temporarily residing here, and they will soon return to Syria. However, most of them have begun to acclimate to their new environment, and some have considered extending their stay due to developments in Syria. At the beginning of 2014, the number of Syrian refugees in Jordan increased to 1.3 million. Local media discourse around their presence was largely hostile, accusing them of stealing jobs from Jordanians and financially burdening the government, which is already dealing with poverty, unemployment and price hikes.<–more–>

“I often hear anti-Syrian sentiments when I take public transportation, such as accusations that we are the cause for the destruction of our own country and the best place for us as punishment is the Zaatari camp,” says Rahaf Ibrahim, 40, who has been in Jordan for nine months with her husband and children. “I have no choice but to ignore them, because at the end of the day we are guests in this country.

Rahaf and her family moved between the suburbs of Homs and Damascus for an entire year. During that time, she lived in constant terror and anxiety at the possibility that Mazen, her 19-year-old son who was called for mandatory military draft, would be arrested. She decided to seek refuge in Jordan, hoping to find a more secure life where her children would be able to continue their education after their house in Darayya was shelled and they lost everything.

Rahaf and her family entered Jordan legally through the Naseeb border crossing. She decided to live close to her relatives in Amman. Those who enter illegally are not permitted to leave the camps without a Jordanian sponsor, while those with money to invest are given special privileges.

Rahaf and her family live in a popular area in downtown Amman. She was able to find work preparing food for the Syrian Women Across Borders initiative. She told Damascus Bureau that the cost of living in the city is very high, and it is often difficult for her and her husband to make ends meet between rent, utility bills and school tuition, all of which amount to 500 US dollars per month. She is able to pay for only part of it through her work.

“I prepare Syrian dishes, and the money from that goes to support 30 Syrian women. My 300 dollar salary covers the basic costs for my family. My husband and I both contribute to securing the basic necessities, but most of the time we cannot cover everything,” she said.

Leila Naffaa, director of the Arab Women’s Organization, says Jordanians are growing more resentful of Syrians, especially in border villages in the north of the Kingdom. She says Jordanians believed that the Syrian problem would be resolved quickly and initially welcomed the refugees when they first arrived. However, in the absence of any solution, Jordanians began to feel the burden of economic hardship, particularly in terms of youth unemployment. This pitted Syrian refugees against Jordanian youth in cities, villages and towns due to the scarcity of available jobs in the private sector and employers’ desire to hire cheap labour.

Bayan al-Adawi, 27, a Syrian woman living in Jordan, says that the high cost of living and the difficulty of finding work have bred resentment from Jordanians towards Syrians, pointing out that the available jobs usually involve long hours in exchange for little pay. In addition, the Jordanian government requires that refugees obtain a work permit in order to work legally in the country. The permit is difficult to acquire, so those who are working without it risk arrest or deportation.

Work permits are granted to non-Jordanians according to the conditions laid out in article 12 of labour law 8 of 1996, which prohibits non-Jordanians from being employed without the approval of the minister of labour or his deputies. The permits are usually only granted on the condition that the work requires expertise that cannot be found among Jordanian workers. Most Syrians work for below the Jordanian government’s 282 dollars minimum wage.

The Arab Women’s Organization in Zarqa province offers psychological, social and legal services to female Syrian refugees through two centres in the cities of Daleel and Rasefah. These centres attempt to mitigate some of the legal difficulties women face. Mrs. Naffaa says that the denial of psychological problems is still commonplace, and a culture of silence prevents women from talking about social problems such as domestic violence because of the fear of social stigma. This delays the start of the assistance programs and the help the organization can offer for overcoming trauma associated with violence.

Hussam Hameedi, 25, does not believe that any social obstacles prevent Syrians from integrating into Jordanian society, because of geographical proximity and the similarity in the culture and traditions of the two people. What impedes their integration, he says, are discriminatory legal practices.

“My mother’s side of the family is Jordanian, which alleviated the burden of being away from Syria for three years,” he said. “While I did not feel alienated, I cannot say the same for all Syrians here. My biggest concern currently is to find work.”

The United Nations recently launched a new plan to expand humanitarian responses for those affected by the Syrian conflict with a budget of 4.3 billion dollars that covers six countries, including 1.2 billion dollars earmarked for Jordan. Mohammad al-Moumny, the Jordanian minister of media and communication, said in a press conference that the amount of aid received by the Jordanian government to deal with the Syrian refugees is not enough, and if they do not receive more aid the difference will have to be paid by the government.

“The presence of Syrian refugees creates pressure on different sectors in Jordan, but the government is committed to abiding by international law and accommodating refugees from Syria,” he added.

Syrian journalist Nareeman Othman, 27, agrees with Hameedi that the presence of Jordanian relatives eased her sense of alienation.

“I was lucky that I came to Jordan a year and a half ago with my family since we have relatives here as well as plenty of acquaintances and neighbours who have left Syria to come to Jordan,” she said.

She said she was content in this changing environment, and she has gravitated towards journalism since the fear of arrest and persecution by the Syrian security forces is no longer present.

“Many of my previous fears have dissipated,” she said. “In the end, we speak the same language and we are culturally similar. While some details may differ, it is similar to regional differences within Syria.”

Othman admits that she, like millions of other Syrians, still misses the feeling of stability. Sabah Halsa, the director of the Centre for Social Education at the Organization of East Amman, says that awareness campaigns on refugee rights and the improved distribution of aid, including to some Jordanians, has helped alleviate some of the tensions between Syrians and Jordanians.