We asked if love can exist under the harsh siege conditions 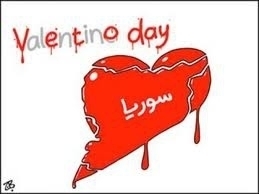 "If we have had to live without food, electricity, or fuel in the harsh winter, I think we can afford to live without love. It's a luxury compared to the need to save our lives," says Saleh,  a resident of the eastern Ghouta in Damascus, answering the question: Do Syrians under siege, shelling and war, still love?

Registration papers and civil records from the Duma province reveal that things in Damascus and particularly Eastern Ghouta, were very different before the siege in terms of emotional relationships, engagements and marriages. The records reveal a wide disparity in the numbers of marriages registered in first and second year of the revolution. The number of marriages was three times higher than previous year. There are two reasons for this. The first is financial; couples had been relieved of financial pressures and costs decreased. The second reason is the increased sense of freedom that was experiences in the liberated areas before the siege was applied and the wide convergence between the people from the cities, which was forbidden before the revolution.

Many young men and women had the chance to get to know each other via the Internet, in contrast to the previous year and the third year of the revolution, when the siege tactics were employed. That is when pressure was increased on civilians, resulting in the decline in these relationships and increased financial difficulties that prevented young men to even think about marriage or emotional relationships, resulting in a decline in the number of marriages, according to the manager of registration in the civil records department.

Mohammad, a 22-year-old university student from the besieged eastern Ghouta, was in love with a girl he knew in college. he combined his feeling of love for the girl with the cold he felt in winter and all the feelings of warmth that were missing under siege in a post on Facebook:

I said to her, stammering:

This cold is killing me.

Your warmth is killing me.”

Mohammad doesn't see his girlfriend except via the Internet.

"She is my shelter, my escape, always asking how I eat and drink. The obsession with hunger and death overshadows all of our feelings,"Mohammad said. "Only her presence comforts me in my life."

Mohammad recognizes that a man is dead without love, but he believes the disastrous conditions imposed on Syrians in all regions has forced them to lose the ability to express themselves. He insists on declaring himself a "lover", rejecting his surroundings.

Many young men inside the besieged areas responded to the question of love with smiles, sometimes irony, sometimes sarcasm and even anger. Do young Syrians still love?

Osama, a 25-year-old media activist with the Free Syrian Army condemns the militarization of the revolution but believes that it was inevitable, saying it is necessary to support the movement over everything else in life. He is afraid to die, like many others, and believes to do so would be unfair to those beloved, saying he would prefer not to have a relationship under these conditions.

Sammar, 26, is not in a relationship now. She says that she forgot what it is to be a woman after her fiance’s death after four years in a relationship during university. She asks how she can retain her femininity when she is constantly afraid of barrel bombs, hunger, and the siege.

Bayan, a teacher in her twenties says she wonders what would happen "if we had more time to stay alive, to think, and to love again.” She was in love with an activist during the revolution. They were determined to get married, she says, but now, they no longer think about the relationship, "because love doesn't grow along with obsession with death".

Saleh, in his thirties, with one of the FSA military battalions and a former anti-government demonstrator sees that love important in the times of war. People in these conditions are more in need of love and reassurance, he says, but denies being in love and says he doesn't meet or see women anymore.

Muhanned points out that the world will soon celebrate Valentine's day while young men and women in Syria, especially in the besieged areas in southern and eastern Damascus and the city of Homs and the rest of Syria are exposed to daily shelling and barrel bombs. This leaves no room for celebration, he says, despite the fact that his girlfriend is waiting for him.

In Zabadani, in western Ghouta we share a love story, which started in the second year of Muhanned's study at Damascus University, with his colleague, Fatima. They were engaged in the fourth year and planned to marry but were forced to break up after he was dismissed from university for participating in a demonstration in the Faculty of Science. He was trapped inside the city during the siege. Mohanned confirms his love, but admits there is now apathy towards the relationship after ten months apart.

The hope expressed in Mohammed's Facebook poems continues to inspire his readers:

They write their beloved ones names on the walls of the sky,

Even some in blood."