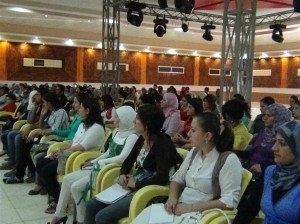 Abdel Majid is an agricultural engineer whose 50 years and grey hair did not prevent him from sitting next to Bayan, his 18-year-old daughter, at a school desk to learn how to read and write in Kurdish. Like many Syrian Kurds, Abdel Majid can speak his mother tongue, but he does not know its grammatical rules or how to write it. This is due to the Baath Party’s ban on teaching Kurdish and their persecution of those who were teaching or learning it.

Since the beginning of the uprising against the regime of President Bashar al-Assad and its waning control over Kurdish areas, Kurdish language courses began spreading all around the city of Qamishli. They are organized by several different institutions, including various Kurdish political parties and independent organizations.

However, teaching Kurdish in public schools, which are still managed by the government in Damascus, has not been as easy.

The Foundation for Kurdish Language is an institution of the Democratic Society Movement, which is laying the foundation for autonomous rule in Kurdish regions in Syria.

During the last academic year, the foundation announced that it will begin teaching Kurdish in Qamishli’s public schools. It has over 200 Kurdish language teachers in Qamishli who work on a voluntary basis. The curriculum taught in these public schools includes books written by Kurdish intellectuals from Syria, Turkey and Iraq.

Hasan Abu Jawdi, a spokesperson for the Foundation, said that the foundation took advantage of the government’s small security presence to organize Kurdish language courses for all age groups.

“The Democratic Society Movement issued a decision in October 2012 to begin teaching Kurdish in public schools in Kurdish majority areas. We informed the Directorate of Public Education that we will send teachers from the Foundation to begin teaching alongside the official state employees,” he added.

According to Abu Jawdi, the public school network in Qamishli is comprised of 50 elementary schools, 20 middle schools and 3 high schools.

No sooner had the teaching begun than the Baath party issued a security decision through the directorate to close these schools and to prevent all teachers from working. The Kurdish language teachers nevertheless insisted on continuing to teach, and the foundation recruited university students to teach other subjects.

Mahmoud, an engineering student, said that he volunteered to teach mathematics, physics and chemistry during the closure so that children would not be out on the streets.

“I believe that it is every person’s right to learn their own language in addition to others,” he said of his support of teaching Kurdish.

Zouzan Ahmad, a Kurdish language teacher in the Golan School in Qamishli, said that many Arab parents and even some Kurds did not allow their children to come to school after the Baath party’s decision. Nisreen, a Kurdish mother of three, abided by the Baath’s ban because she opposes the policies of the Democratic Society Movement and its ally the Kurdish Democratic Union Party, known by its Kurdish acronym PYD. According to Zouzan, many Arab parents feared possible security measures that the Baath would take. Nevertheless, she continued to communicate in vain with many Arab parents to convince them to send their children to school despite the closure.

Forty five days after the school closure decision, the two sides, the Baath Party and the Directorate of Public Education on the one hand, and the Foundation for Kurdish Language and the Union for Kurdish Teachers on the other, finally reached a compromise. The agreement allowed teachers to go back to work and added mandatory Kurdish classes to the curriculum after reducing the number of music, art, and physical education classes.

Hasan Abu Jawdi believes that the government’s retreat from its initial position is due to its fear of creating a conflict with the Democratic Society Movement and the PYD. Arab school administrators refrained from commenting on the agreement.

Zouzan Ahmad noted that students are more excited to learn Kurdish than they were last year, particularly after the compromise between the government and the Kurdish parties. She said that even Arab and Christian students of Assyrian and Armenian origin enjoy the classes. Nasser, an Arab child in the third grade, has been learning Kurdish since last year. “I like learning Kurdish so that I can speak with my friends and understand what they are saying,” he said.

The Foundation for Kurdish Language is planning a new project to spread Kurdish not just in Qamishli, but in all Kurdish areas in Syria. It announced the establishment of a Kurdish Language Academy in the city to train a large cadre of teachers.