Mother Superior Pelagia Sayyaf: “The nuns are living their lives normally, waiting for the security conditions to be conductive to a return to our convent in Maaloula” 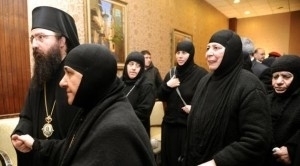 The Maaloula nuns released earlier this month by the Al-Nusra Front are being hosted by the Greek Orthodox Patriarch in Damascus and are not under house arrest, as recent reports suggested, according to the nuns’ Mother Superior, Pelagia Sayyaf. The nuns were released as part of a prisoner exchange with the government of Syrian president Bashar Al-Assad reportedly mediated by Qatar and Lebanese security authorities.

There had been reports that the thirteen Lebanese and Syrian nuns based out of the convent of St. Thecla in Maaloula and held captive by the Al-Nusra Front for more than three months had been placed under house arrest by the Assad government for comments made following their release. The nuns had expressed thanks to the Emir of Qatar for his efforts to mediate talks between the Al-Qaeda-affiliated Al-Nusra Front and the Damascus government while also confirming they had been treated well by the Islamist militia. The Syrian authorities have denied that Qatar has played any direct or indirect role in securing the nuns’ release.

Speaking to Asharq Al-Awsat, Mother Superior Pelagia Sayyaf said: “The nuns are living their lives normally, waiting for the security conditions to be conductive to a return to our convent in Maaloula.”

Regarding the controversy that surrounded the nuns’ statements immediately following their release, she said: “Before we reached the border area where the reception ceremony took place, a grigadier-general in the [Lebanese] State Security apparatus told me, ‘You must express thanks to President Bashar Al-Assad, Emir of Qatar Sheikh Tamim Bin Khalifa Al Thani, and Director-General of [Lebanese] Public Security General Abbas Ibrahim, and that is what I did in the belief that this came in coordination with the Syrian government.”

“After this, they gave me a bag with the image of the Virgin Mary and the Christian cross on it, and they told me that it was from General Abbas Ibrahim. And then they asked me to place this over our chests,” she added.

As for her statements about the Al-Nusra Front’s good treatment of the nuns, she said: “The anger of some people towards these statements is justified ,because the Al-Nusra Front is against the Syrian state. However, I must bear witness to God and speak the truth, and that is that the members of the Al-Nusra Front treated us very well. This is not because they are good, and with others they committed very bad practices . . . but they were different with us, perhaps because we were part of a negotiation process.”

Recounting an example of an incident that took place during their detention, she said: “One of the young members of the group raised his voice to us, and when Abu Azzam—who was responsible for us—heard this, he shaved the beard [of the youth] as a punishment for this.”

She also denied that any of the Al-Nusra Front members had confiscated the nuns’ crosses, saying: “Nuns do not always wear crosses, with the exception of the mother superior, and I had removed my cross weeks before the kidnapping.”