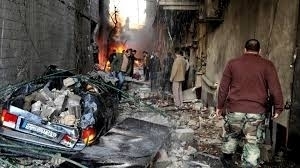 It’s one of the best known districts in Syria; extrememly crowded, dirty and the place for ancient Palestinian warriors who settled their disappointment there, after a long journey of combat against Israel.

The Palestinian who were forced from their homes are easy to recognise through their walking sticks, damaged legs or arms, and through their features.

After the uprising broke out in Syria, Yarmouk Camp remained calm  for a long time, before suddenly exploding. It started to witness a very fierce confrontation between the forces of Ahmad Jibril forces, the Palestinian commander very close to the Syrian regime, and armed groups aligned with the opposition.

Many tales were narrated about the terrible actions that took place in Yarmouk, after the siege was imposed by the regime 15 months ago. Families are starving and children roam the streets with chests bones protruding, patrolling the gardens, searching for leaves or grass to eat.

Meanwhile, hundreds of Palestinians, who thoughts that they had been luckier than others, were drowned in the Mediterranean with all eyes looking away.

On 26 December, Yarmouk Camp was brutally demolished by MiG jets. Dozens of people were killed and thousands of residents started to flee, taking nothing.

Since then, Yarmouk has suffered a very difficult circumstances because of the iron siege and the regime imposed and the daily bombing.

Day by day, Yarmouk has become a place for death. It is now home to just  30,000 people, trapped in basements waiting for their mysterious fate, while more than one million inhabitants, 15% of whom are Palestinian, have become a refugees once again in other areas of the country.


Excluding Hamas, which has sided with the Syrian people's revolution, and the forces of Ahmed Jibril, which have stood by the Syrian regime, the Palestinian factions decided not to become involved in the Syrian conflict.

But in 2011, Palestinians families ambushed Ahmad Jibril in his office, which is called "Alkalessah", after burying their sons, killed and taken by Jibril to the Syrian Israeli border on purpose to be shot down by Israel in a very sever way.

A few  days later Yarmouk Camp were under the control of those angry people, and under the Syrian army's gunfire too, and it was obvious that the neutrality was no longer possible.

With the increasing decay of the situation in Yarmouk, the Palestinian official position became more embarrassing. It became urgent to find a solution, which prompted the 14Palestinian factions to agree to a negotiation with the regime on the one hand and the Nusra front on the other.

After tough negotiations, opposition groups reached a truce, which will hopefully enable the people inside Yarmouk to get food, medical care or to leave the camp.

A partial ceasefire has been applied, a few patients and students have been evacuated, and some cars have reached the camp with a food aid.

But this is unlikely to be sustained for long, because the regime has no willing to make a real truce; all what it aims for is to regain control of the camp and pushing the opposition fighters out, so the truce was broken quickly.

Instead of releasing a thousands of detainees as it was supposed to, according to the truce, the regime forces captured many people coming from inside the camp and prevent the food aid from reaching the people inside Yarmouk. It was very clear that the opposition forces will be back to their  positions inside Yarmouk once again. In addition, more than 600 fighters united together and established what they called "sons of Yarmouk" battalion as a new opposition military group.

Finally, it wasn’t a truce just for those who were about to die in Yarmouk camp, but it was a very short truce for the Palestinians who were homeless without any place to stay. They were soon carrying their lightweight belongings back to Yarmouk and don't care if the siege will be imposed again; they will die there, but just don't want to lose another home.