There are no statistics detailing the number of women currently working in Syria, since most of the work they do is in the informal economy 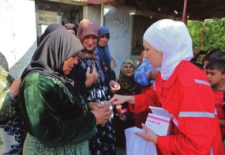 Nawal, 35, used to run a kindergarten in the town of Daraya near Damascus before it was bombed, leaving her life’s work in ruins. She lived through a siege that left her hungry, sick and terrified until she fled in October 2013 with others to a safer area in the Damascus suburbs. She and her family currently share an unfinished building with several other displaced families. There, Nawal found herself surrounded by a large number of children who had suffered as her children had, crying and emotionally distraught. She decided to establish a new kindergarten in the same building where she and others live, and is trying to convince mothers to send their children, too.

“I gathered all the children under six and took their names, ages, health status, and their social and psychological situation,” she said. “Through my experience with children, I decided that no matter how bad my financial situation was, I would create something fantastic out of nothing.”

There are no statistics detailing the number of women currently working in Syria, since most of the work they do is in the informal economy, which is not covered by social security and often makes them vulnerable to exploitation. However, women’s work and their role in supporting their families during wartime remain very visible.

Nawal and the children in the kindergarten began painting a room with the materials available to them. From paper strewn on the streets, they made colourful figures. As more children flocked to her, she began working with her husband in the kindergarten and accepting children for a symbolic weekly fee of 130 Syrian liras, which is less than one US dollar. According to Nawal, there is a psychological reason behind charging for the service.

“Their contribution pushes them to return to the kindergarten,” she explained. Nawal brought joy back into the hearts of war-weary children, playing with them and teaching them along with some young college women who were also displaced. Together, they created a kindergarten that represented hope for a brighter future. The bitterness of war led her to work again with a desire to overcome death and strive for a better life.

Ghalia, 50, has her own story about accommodating herself to war through her work managing a cleaning service operation. She fled the fighting in her native town of Hajar al-Aswad south of Damascus a few months ago, and now lives in a government-run shelter in Damascus. Ghalia did not give up hope when her son was shot and killed by opposition forces, or when her house was bombed by the regime. She went out looking for work to support the five children she is raising alone after her husband’s death years earlier.

Government aid is barely enough. While her children excel in school, she still worries that they may have to drop out. She visited schools and houses looking for a job, and found that several schools needed someone to clean their premises. With her daughter’s help, Ghalia began organizing other women and soon became the focal point connecting them to houses, schools, and buildings that needed cleaning services. She soon established a small, informal business that sends out ten women to work every day according to demand. She manages everything by phone, sending out women to those who need their labour, as well as supervising them and setting their work schedules. Through this, she was able to make some money that enabled her to send her daughters to college.

“I am out from morning to evening. I send out women to work and also work myself, and when we meet in the evening we divide our earnings,” she said. “I built good relationships with my neighbours and with the working women. We always respect our appointments and the quality of our work is excellent. We don’t accept subpar work and we don’t waste anyone’s time.”

Ghalia eventually aims to establish a small company, in order to provide for herself and the women whose economic situations have led them to seek housework.

“We would like to register the company legally so that we don’t get taken advantage of by any of our customers,” she said.

Social worker and community activist Majd Khoury believes that the war has pushed Syrian women into the workforce to support their families.

“Rural women have been forced to seek work,” she said.

“Now women are the main breadwinners in many families who have lost their male heads of household. They have proven their competence in many fields. Women are voicing their opinion on the situation in the country, and they are seeking to join organizations through which they can understand their rights,” Khoury added.

Wars lead to a series of changes that affect everyone, including women. Without glossing over the negative aspects of such changes, Khoury points to the positive ones.

“These changes depend primarily on women’s desires and capabilities in facing a society that is slow to accept change. There is no doubt that women can accommodate change, and this flexibility allows them to have a more positive outlook in comparison to men in times of war, especially with regards to their families,” she said.