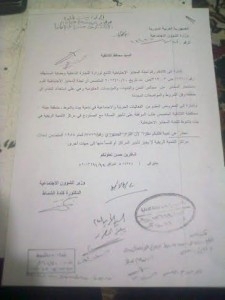 Residents of the town of Beit Yashout in eastern Syria are angry at their local government’s refusal to set up a subsidised bakery, arguing that an influx of displaced people has created added pressures there.

Like other towns in the Jableh district of the Latakia governorate, Beit Yashout suffers from a severe lack of services.

Once a village, Beit Yashout has expanded into a town of some 20,000 people, especially after a road was built allowing travel to and from Hama and Sahl al-Ghab to the east and Jableh on the coast.

Because areas to the east are under siege, Beit Yashout is a main point of access for many villages and towns.

At the moment, the only source of bread in Beit Yashout is a supply brought in daily from the city of Jableh and sold at 25 Syrian pounds (16 US cents) for eight loaves. State-subsidised bread from government-controlled areas costs just 15 Syrian pounds for the same amount.

The town’s residents formally asked the authorities in Latakia governorate to set up a local bakery, and suggested renting an empty building belonging to the rural development department. However, they say the department referred the matter to the department of social affairs and labour, where the minister, Kinda al-Shamat, turned down the request.

Shamat said the request fell outside the terms of Presidential Decree No. 1007, dating back to 1958, which prohibits which prohibits rural development centres being rented out to other institutions.

That led to an angry reaction on social media, with comments like, “Consider us displaced persons, Madam Minister, consider us to be like the residents of Douma and Moadamiya.”

Other solutions have been suggested, such as obtaining a rental license for a bakery from the city council, or building a new bakery. But anger is still running high.

Moutajib, 29, said resentment in the town was like a “dormant volcano that could erupt any second”.

He warned that the issue of the bakery could be “the last straw that breaks the camel’s back if the state continues a policy of negligence towards the people’s requests and continues to ignore their suffering”.

Aqaba, 55, whose soldier son was killed in Aleppo, said, “The revolution has been going on for three years and pain is tearing up our hearts. We have sacrificed our children, a part of our souls, for the sake of the nation we live in. Now we are certain that no one values what we have done. How can any of us trade a human for a loaf of bread?”

Muder, 27, who works for a transport company, complained that the issue had been ignored by the media.

“The official media did not lift a finger when the Latakia massacre happened in August 2013 and it will not do so today for the sake of a loaf of bread,” he said.

The demand for a bakery in Beit Yashout appears to be linked with the declining economic situation, high unemployment and real and growing competition from internally displaced people (IDPs).

“Everyone knows that nothing is done within the framework of the law and that many abuses and illegal activities have happened. In this particular case, they are adamant about applying the law,” said Suhail, 32, adding, “Do the industrialists who fled from Aleppo to coastal cities have a permit for their construction sites? Didn’t the governorate of Tartous issue a resolution setting out the need to build a housing block especially for the 2,500 internally displaced persons?”

Although residents avoid direct references to the problems caused by IDPs, coastal towns have been affected by many social and economic changes since the revolution began. The prices of real estate have risen with higher demand. Latakia alone hjas taken in one million IDPs, according to some reports.

On the other hand, the coastal regions have also attracted investment as a result of an influx of funds from Aleppo businessmen, who have established commercial and industrial enterprises.

Fears that local residents have been squeezed out have fuelled strife. Some regime supporters have called for IDPs to be driven out because they represent a “breeding-ground for terrorism”.

Mustafa, 40, who owns a coffee shop in the Sheikh Daher district of Latakia city, said there was “an assumption that most of the displaced are Sunni”.

“It is the right of citizens to express their concerns and fears, because there have been significant changes in the local demographics and population since the displaced people arrived,” he said.

Oqab, a 29-year-old bookshop manager in Latakia, added, “We have welcomed the displaced into our homes, but their children are the jihadists and extremist Muslims who are killing our children.”

Not all IDPs experience problems. Abdallah Omar, 51, is an Aleppan merchant who moved to the city of Latakia two years ago with his four brothers.

He opened a store selling computers and IT services in the Sheikh Daher district, and denies there has been any discrimination against himself or other traders.

“There are no truth to these accusations… nothing is forcing us to stay in a place where we are experiencing discrimination. Instead, we truly feel we are in our home town among family,” he said. “This is what we should be feeling, because we are all Syrian.”

A clothes vendor in the city’s Hanano street, Zeid Othman, also denied there was any animosity from local residents towards traders from Aleppo or “even towards traders from other provinces, who would not continue working or living somewhere where they weren’t welcome”.