Bloodied in the crucible of the struggle against US-led forces in Iraq, Iraqi militia fighters are lending their battlefield expertise to Bashar Al-Assad’s regime 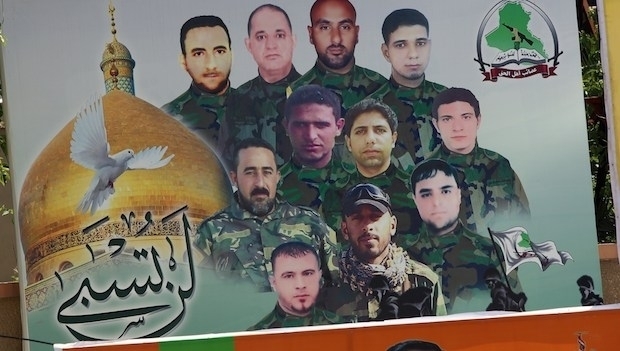 Despite the pre-war strength—on paper—of the Syrian armed forces, the fighting in Syria has stretched the limits of Syrian President Bashar Al-Assad’s military resources. Now in its fourth year, Assad’s fight against the forces of the Syrian revolution depends increasingly on support from Iran and its proxies. The role of Lebanon’s Hezbollah came to the fore at Al-Qusayr in June 2013, but Shi’a militias from Iraq have also played a key part in defending southern Damascus and augmenting Assad’s troops elsewhere. As a result, the same groups that fought against US Coalition and Iraqi forces in southern Iraq from 2003 are now present in Syria, with new names that reflect a renewed sectarian purpose. With these Syrian excursions playing a role in the campaigning among some Shi’a parties for the upcoming elections in Iraq, Iraqis may take on a greater share of the burden in keeping Assad in power as the conflict continues to rage.

A new force on the battlefield

Iraqi Shi’ite participation in Assad’s war effort draws strongly on the relationships that sustained the insurgency against the US-led forces in southern Iraq in the last decade. The move from southern and central Iraq into Syria was spearheaded in early 2012 by members of two militias backed by the Quds Force, the unit of Iran’s Islamic Revolutionary Guard Corps (IRGC) tasked with operations abroad. Asa’ib Ahl Al-Haq formed in 2006 from a splinter of Moqtada Al-Sadr’s Mahdi Army and fought Coalition forces in Iraq in contravention of Sadr’s 2007 ceasefire order, receiving support from the Quds Force and Hezbollah. The smaller and less well-known Kata’ib Hezbollah emerged as an elite Shi’a insurgent force in and around Baghdad in 2007. The two groups conducted numerous attacks against Coalition and Iraqi forces during the American occupation of Iraq, with Kata’ib Hezbollah even reported to have hacked into US military drone feeds in order to evade American operations targeting them.

As the number of attacks by Shi’a groups on US forces transitioning out of Iraq dwindled in 2011, rumors began to circulate that members of Asa’ib Ahl Al-Haq and Kata’ib Hezbollah were moving into Lebanon, and even Iran, to train for action in Syria’s nascent but already sectarianized conflict. These and other Iraqi groups had years of experience fighting an insurgency against a large conventional military force, carrying out sniper and rocket attacks and roadside bombings, and they were needed again, this time to support a Syrian army facing similar insurgent tactics. If Bashar Al-Assad, the Ba’athist Alawite president, was not the obvious ally to these groups that he was to their Iranian patrons, the Sunni Islamists who quickly began to arrive in Syria to fight against Assad were at least obvious enemies.

The activities of Iraqi Shi’a militants were apparent in Syria by early 2012, when the body of an alleged Asa’ib Ahl Al-Haq member was returned from Hama for a funeral in Baghdad’s Tahrir Square. However, their main area of operation was southern Damascus, and particularly the area around the shrine of Sayyidah Zaynab, the Shi’a holy site said to house the remains of the Prophet Muhammad’s granddaughter. Home to many refugees from Iraq’s own conflict and strategically vital because of its proximity to Damascus International Airport, Sayyidah Zaynab quickly became the focal point for Iraqi Shi’ites fighting in Syria.

In early 2013, both Asa’ib Ahl Al-Haq and Kata’ib Hezbollah publically acknowledged that their members were being killed in Syria, while generally avoiding stating precisely where these militants had been fighting. This allowed the groups to focus attention on their role in defending Shi’a holy sites and neighborhoods in southern Damascus. In the autumn of 2012, members of both Asa’ib Ahl Al-Haq and Kata’ib Hezbollah, with participation from Lebanese Hezbollah and some Syrian Shi’a fighters, took on the moniker Abu Fadl Al-Abbas Brigade, fighting under the banner of a warrior who sacrificed himself for Imam Husayn’s forces at the Battle of Karbala in 680 CE. Identifying themselves under this name in defense of the shrine of Sayyidah Zaynab—also the daughter of the first Shi’a Imam, who was captured after the Battle of Karbala and marched to Damascus—served to link the group’s members to a legacy of defiance and protecting the bloodlines of the Imams of Shi’a Islam.

In addition to its sectarian resonance, the use of the Abu Fadl Al-Abbas designation granted the Iraqi factions behind the group in Syria the ability to obscure some of the details of their involvement. At the same time that Lebanese Hezbollah was taking a greater role in the conflict, it was increasingly clear by the summer of 2013 that Asa’ib Ahl Al-Haq was providing the majority of the Iraqi fighters joining the Assad cause, receiving training and funding from Iran and often intermingling with members of Lebanese Hezbollah.

Asa’ib Ahl Al-Haq members were joined by fighters from Kata’ib Hezbollah and Kata’ib Sayyid Al-Shuhada, another Iranian-backed militia drawn from the ranks of the Iraqi Shi’ites who had fought Coalition and Iraqi security forces. Rumors also abounded of the involvement of members of the Liwa Al-Youm Al-Maw’ud, the successor to Moqtada Al-Sadr’s Mahdi Army. In July 2013, the Badr Organization—once known as the Badr Brigade, the militant wing of another Shi’a political party, the Islamic Supreme Council of Iraq—also announced that it had sent forces to Syria. With Badr’s entrance into the Syrian conflict under the banner Forces of the Martyr Muhammad Baqir Al-Sadr—named after the radical Grand Ayatollah who was Moqtada Al-Sadr’s father-in-law—the main cast of Iraqi Shi’a militias that had fought against the occupation of Iraq had now reformed in Syria.

Over the course of 2013, a succession of new unit names echoed around social media channels associated with Iraqi Shi’ites. Groups such as Liwa Zulfiqar and Harakat Hezbollah Al-Nujaba drew from the ranks of already established groups, such as the Abu Fadl Al-Abbas Brigade, creating the impression of an ever-greater number of Shi’a militias joining the Assad cause. In fact, despite the proliferation of monikers, the new groups continued to be made up of fighters recruited principally by Asa’ib Ahl Al-Haq and Kata’ib Hezbollah, trained and supplied by Iran and Lebanese Hezbollah and sent to fight alongside Hezbollah and Assad’s army. The groups’ own social media posts tied most of their activities to the same area of southern Damascus and echoed the raison d’être of existing groups: the defense of the Sayyidah Zaynab shrine and other Shi’a holy sites.

No end in sight

The narrative of defending holy sites, as well as the rising tide of sectarianism in Iraq itself, has proved extremely fruitful in the recruitment of volunteers. Sayyidah Zaynab’s proximity to Damascus International Airport meant that the first cadres of experienced fighters sent to defend the neighborhood around the shrine would also augment the defense of the airport and thereby ensure their own resupply and reinforcement. They have since been joined by thousands—tens of thousands, by some accounts—of volunteers from southern Iraq and Baghdad. Well supplied and drawing on their core of experienced combatants, by late 2013 they had helped to secure Sayyidah Zaynab and begun to publicize the fact that they had moved to other contested areas around Damascus where Assad’s ability to deploy troops was limited.

In recent months, the role of Iraqi Shi’ite fighters has expanded to reflect both the growing capabilities of the new recruits and the broader ambition of defending not just specific holy sites, but all of Shi’a Islam. Iraqi Shi’ites have been fighting north and west of Sayyidah Zaynab at Babbila and Al-Hajar Al-Aswad, as well as in the northeastern suburbs of Jobar and Qaboun. A new unit linked to the Abu Fadl Al-Abbas Brigade, Liwa Assadullah Al-Ghalib, has been reported fighting with regime forces in the suburb of Eastern Ghouta. Meanwhile, an Asa’ib Ahl Al-Haq faction under the command of the group’s military commander, Akram Al-Kabi, split off from the Abu Fadl Al-Abbas Brigade and moved to Aleppo to help break the rebel siege of the international airport there. Further afield, Iraqi Shi’a groups are said to have taken part in offensives in the mountainous Qalamoun region on the Lebanese border, with large numbers of Badr fighters reported to have taken part in an attack on the city of Yabroud in March 2014.

With no signs pointing to a resolution to the Syrian conflict or a decisive victory by either side, there is no reason to expect an imminent end to the flow of Iraqi Shi’ite volunteers for Assad’s cause. Sectarian tensions in Iraq have risen steadily since 2011, amplified first by the outbreak of fighting in Syria and then by the insurgency in western Iraq. The main Iraqi Shi’a militias operating in Syria are connected to parties competing in this month’s parliamentary elections in Iraq: Badr, led by Transport Minister Hadi Al-Ameri, is part of Prime Minister Nuri Al-Maliki’s coalition, with which Asa’ib Ahl Al-Haq’s Sadiqun bloc is also informally allied, while the Sadrist slate is one of Maliki’s main competitors for Shi’ite votes. Sadiqun in particular has highlighted the group’s involvement in Syria in its election campaign, making a mockery of Maliki’s official disapproval of Iraqi Shi’ite involvement in Syria.

Meanwhile, across the border, the core Iraqi Shi’a militias fighting in Syria are now experienced both in waging an insurgency against larger conventional forces and in fighting alongside them, and retain extremely close ties to Iran and to Hezbollah. Buttressed by a continual stream of volunteers motivated by apocalyptic sectarian rhetoric and tensions at home, and with Syrian regime troops limited in number after more than two years of war, Iraqi Shi’ite fighters are now on the front line of Assad’s fight for survival.