When other Syrians want to flatter men from Deir al-Zor, they call them “brothers of Batta”, a reference to a local woman who resisted French occupation in the 1930s 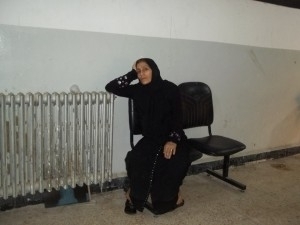 Deir al-Zor in eastern Syria is a conservative city where women have few opportunities to participate in public life.

Still, a woman is considered a source of pride to her family when she endures harsh conditions that many men cannot withstand. When other Syrians want to flatter men from Deir al-Zor, they call them “brothers of Batta”, a reference to a local woman who resisted French occupation in the 1930s.

In the uprising against President Bashar al-Assad, one woman who played a very important role in Deir al-Zor was Muntaha al-Hisso. Although she was a widow struggling to provide for her nine children, she volunteered in a field hospital at a very difficult time during fighting between the opposition and the regime, before she was killed by a sniper over a year ago.

Residents of Deir el-Zor, who felt their city had been marginalised, participated widely in the protests against the regime in 2011.

Armed opposition factions then appeared in July 2012, and more than half of the city was declared “liberated” from government forces. This prompted heavy shelling by the Syrian army and caused large parts of the population to move to safer areas. This led to a lack of doctors, nurses and pharmacists.

Only three surgeons, a few general practitioners and some medical students remained. People started volunteering at makeshift hospitals to help treat the large numbers of casualties.

Despite al-Hisso’s difficult personal situation she volunteered at one of these hospitals. She cleaned blood off the floor, assisted the wounded who could not move, and prepared food for the other volunteers.

A media activist who goes by the name Abu Daniel was frequently present at the hospital where al-Hisso volunteered.

“She was as busy as a bee,” he said, describing how al-Hisso worked for hours without rest. “We all admired this woman’s determination and discipline. What surprised me even more was that she was a widow taking care of nine children.”

“I was only able to take a single photo of this amazing woman. The doctors who abandoned their duty to this city should have learnt the meaning of humanity from her,” Abu Daniel added.

The military campaigns against Deir al-Zor intensified between September and December 2012, leading to a total siege of the city. Unlike al-Hisso, most of the remaining residents fled.

“Muntaha refused to leave the city with the last convoy before the siege intensified. She was like an older sister to all those working in the field hospital,” said Dr Melhem, who worked with al-Hisso. He added that she had been very reluctant to take any payment for her work, although she probably needed the money.

Abu Hussein, a fighter in an opposition group, was wounded during that period, and was cared for by al-Hisso after all his family members fled the city.

“She had incredible strength, able single-handed to help a man weighing about 80 kilogrammes,” he said. “I was suffering from several fractures to my left leg and shrapnel in my stomach. She helped me stand up and move when no one else was at my side. She did not hesitate to make me soup, which was almost impossible to find.”

After a day of hard work, al-Hisso would go back late at night to her home in the underprivileged Jbaileh neighbourhood, considered an opposition stronghold. Like the few civilians who remained in the city, she often faced the danger of being killed by artillery or sniper fire.

As al-Hisso returned home on the evening of December 21, 2012, she was hit and critically wounded by two sniper bullets.

She was taken to Turkey for treatment. People who spoke to her before she left say that she told them to take care of her children, as well as the wounded at the hospital.

After five days, the tragic news reached the city that al-Hisso had died. Only three days later, the opposition was able to ease the siege by taking control of a bridge that connected the city to neighbouring villages. Al-Hisso did not live to see it.

After her long journey in humanitarian work, the only trace remaining of al-Hisso is the photo that Abu Daniel took of her. Her children have fled the city with other relatives. But the care that al-Hisso gave to dozens of wounded people will keep her memory alive.

“Like other fighters, I had lost members of my family who had fled the city,” said Abu Hussein. “Muntaha was like an older sister to us. She helped us and gave us compassion.”