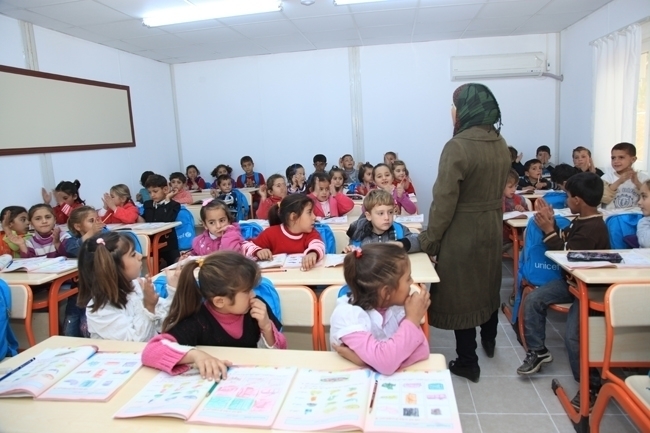 Already having been exposed to violence and displacement, millions of Syrian children are now missing out on both a standard education and the necessary psychological support to handle the traumas they have endured. The possibility of a lost generation is very real. Children both inside Syria and those refugees in neighboring countries are witnessing their past and their future disappear amid the ruins of destruction. All the while losing their innocence and being deprived of the most basic right just to be children, to play and to learn and to experience.

One foundation, "Creative Children of Syria", works with refugee children, and most of its work is in Turkey. Through musical and art activities, alongside psychological support from specialists, the foundation tries to heal the children’s war wounds and let them release their energy in positive ways. All of the staff are volunteers and are trying their best to save what remains of these lost childhoods.

In the schoolyard, Assad, a member of the foundation, sat on a wooden bench, looking dejected. Next to him sat an oud, which he brought thinking it would bring some joy to the children. When I spoke to him, he looked up at me as if it was the first time he had seen me. I joked with him in an attempt to lighten his mood, and find out why he looked so sad. And he said in a raspy voice, “Oh… the principal canceled the music lesson, he said that music is haram!”

His shock was contagious and I was left wondering what time period the principal had come from. Why would someone with such an old-fashioned mentality be allowed to manage an education institution? Did our people escape from tyranny and sometimes death for their children to be taught in a school where the principal decides what exactly is haram and what is halal?

The principal mentioned above is Mr. Mohammed Kalawy, of the Rowad Al-Mustaqbal (Pioneers of the Future) school in the city of Gaziantep in Turkey. He had initially allowed artistic activities including drawing, coloring and singing, for the students, but then changed his mind and decided music lessons had to be canceled.

The members of "Creative Children of Syria" refused to abide by the principal's new instructions, but after a long debate, they decided that the interest of the students should come above everything else, so music teachers were discharged and the rest of the team went back to work. But the incident created a similar dispute within the school, when one teacher, Amany, could not remain silent. She tried to explain the importance of music in developing a child’s personality and its positive impact on children.

But Amany’s persistence was met only with an even stiffer response from the principal, who reiterated that for him, “Music is haram and I will not allow it in my school.”

The next day the principal did not hesitate to call her into his office to inform her that she was being fired, “due to school-related considerations.” He also told her that there were other, much more qualified teachers than her. So Amany, the only specialized teacher, who had graduated from the Faculty of Education, was replaced by another teacher who had graduated from a religious Islamic school.

When we met with Amany she spoke of the struggles she had faced since leaving Syria.

“I escaped to Turkey with my children because of war, and finally, after a long search looking for work, and trying to live a decent life with my children, I found this job at the school. I met his conditions before even having met the principal, such as his insistence that I wear the veil, which I did just so I would get the job.”

Taking a deep breath before continuing, Amany added, “I had tried to assure him that I am Muslim and that I know my duties very well without wearing the veil. But he insisted that there was no place in his school for an unveiled teacher.”

The real questions facing every humanitarian activist concerned with the Syrian refugee issue are these: Who is responsible for the hiring of such a manager, with a mentality like this, in such a critical position as a school principal? What role does the Syrian government and indeed the opposition Coalition have in such situations?

The real victims here are the children. Must they repeat, three times before going to class each day, “Islam is my religion, Mohammed is my prophet, heaven is my wish,” according to one of the teachers in the same school? Did Syrians dream of getting rid of the Baath Party’s tyrannical mentality, which aimed at creating one rigid society, simply to replace it with a system of new dictators, who claim to be working in the name of the revolution, but are doing so with a Mullah’s mentality?

And it seems that this way of thinking is not limited to a school principal here or there, but that the management and organization of the new education system is influenced by such thinking. There appears to be an unofficially agreed upon pattern among some of the officials responsible for monitoring the education system. Amany confirmed this: “through filing a complaint to the special committees in the opposition National Coalition, we saw only procrastination. They even accepted the principal’s version of events without conducting any thorough investigation. The response from the Education Ministry was careless and my complaint is as yet unanswered.”

Amany questioned whether this response, or lack thereof, was indicative of “a sign of neglect or rather a tacit declaration of approval of the principal’s actions.”

A school should be a safe place for refugee children, a place where they can go to learn new things, and make new friendships, while feeling comfortable and at ease. Schools should help children regain a sense of normalcy and set goals for the future.

We must ask a number of essential questions in order to find the best solutions for creating such schools. Where is the current educational process headed? What methods is it based on? What are the expected outcomes? Are we going to imbue in our children with the same strict mentality which will produce only more violence and social instability? Don’t we need a new educational system, one which is more open and conscious of its role in society?

These questions will hopefully reverberate around society and provoke necessary responses and discussions so that we can create an education system which is up to the challenge of raising men and women of the future.