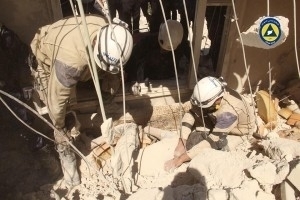 Rescue workers, known in Syria as civil defence forces, face a lack of resources and staff in opposition-controlled parts of Aleppo.

Most of the civil defence centres that used to provide crucial services are located in government-controlled districts. Rebel-held neighbourhoods, meanwhile, are under constant aerial bombardment – the intensity of which significantly increased in January, causing large numbers of casualties as well as widespread destruction.

Halab News, a network of pro-opposition media activists in Aleppo, recorded that government aircraft dropped 344 barrels filled with explosives on the city in March. The figure for April was nearly twice that, at over 640 barrel bombs.

According to the Violations Documentation Centre in Syria, Aleppo province had the highest numbers of civilian fatalities in the past two months – 426 killed in March and 606 in April.

After every bombing, good-hearted residents rush to the scene to rescue the injured and remove the dead from under the rubble. The lack of specialised rescue works has often meant that people with critical injuries die.

Khaled Hajjo, who heads the civil defence centre in the Hanano neighbourhood, spoke to Damascus Bureau about the work of his own centre and two others in opposition-controlled neighbourhoods.

Hanano has probably suffered the most from aerial bombing, taking 73 barrel bombs in March, according to Halab News. The few families who have not fled from the neighbourhood live in dire conditions. In addition to the constant threat of death from the skies, they suffer shortages of electricity and drinking water, while rubbish is piling up on street corners.

Hajjo, who stopped studying law after the revolution started in 2011, said the fact that Hanano was nearly empty was both “sad and a relief”, since fewer people meant fewer casualties.

He said the three rescue centres had five fire engines and five other trucks, as well as light and heavy excavation equipment. He and his colleagues would like to have twice as many vehicles in order to cope with the bombings better. Opposition-controlled districts of Aleppo also need two additional centres, one of which is being currently built.

Media activists have complained that equipment and funds donated by the Assistance Coordination Unit, an opposition aid agency affiliated with the Syrian National Coalition, have been slow to reach civil defence teams in Aleppo province. The opposition-led interim government and the councils for the city and province of Aleppo have traded accusations about who is responsible for delaying the distribution of essential resources.

Hajjo recalls that in the past, the lack of equipment led to several people losing their lives under the rubble. On August 16, 2013, at least 40 people were killed when the Bustan al-Qasr neighbourhood was bombed. According to Hajjo, it took nine days to pull out the casualties caught under the rubble at the time, whereas now it would only take two days.

The high number of airstrike casualties shows how crucial it is to have fully-equipped rescue teams. On April 30, at least 25 children were killed when their school in al-Ansari neighbourhood was bombed.

In this difficult situation, the rescue centres are finding it difficult to recruit as many members as they need. According to Hajjo, each civil defence team needs 50 members but only has 20 to 30. The civil defence centres are unable to attract new members because they offer a meagre monthly wage of around 70 US dollars, plus some food supplies.

Not only is the job unrewarding financially, it is also dangerous. Military aircraft often come back and target the site of a bombing just as the rescue teams are at work there. Three rescue workers from the Hanano centre were killed on duty on March 9.

When the current campaign of aerial bombardment started, most civil defence workers went to Turkey with their families, and then came back to face the daily threats and pressures.

Hajjo says the teams can be called out as many as 30 times a day. Their work involves not only evacuating casualties, but also lifting the rubble and communicating with the public. In March, his civil defence centre ran an awareness campaign about safety measures, and three team members were assigned to answer questions.

Abu Qassem used to work in the construction industry and is now a member of the Hanano rescue team. He told Damascus Bureau stories of the daily hardships he faces. Some of them are horrific, like his description of how he and his colleagues removed the shredded body of a boy of about 12 who was killed by an airstrike in al-Ahmadiya neighbourhood.

“Lifting the bodies of children is what affects me the most,” he said.