One voter describes upcoming presidential ballot as a “farce” 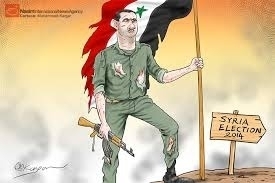 Sarah lived in Damascus for 12 years, but recently returned to her home city, Latakia, on the Syrian coast. Life, she says, has become impossible in the capital because of the mortar shells fired by the opposition. Most of her friends have left Syria because of the war.

Under these circumstances, Sarah – who is opposed to President Bashar al-Assad – says she is not concerned about the presidential election planned for June 3. “This election seems like a fantasy to me,” Sarah said. “I am not going to vote. Who will vote anyway? Half the people have left Syria or have been displaced by the war. And who are the candidates? I only know one candidate [Assad], and I am certainly not going to vote for him.”

The government is trying to promote the multi-candidate presidential election as proof of democracy. Under Bashar al-Assad and his father Hafez al-Assad, choosing a president involved just one candidate. But even though Syria has a new electoral law, the prevailing belief among opponents of the regime is that this election is being set up to guarantee that Assad remains in office.

Statements made by the two other candidates have only reinforced the sense that their role is merely to make the election look pluralistic. One of the candidates, Maher Hajjar, is a former member of the Syrian Communist Party, which has announced that it supports Assad’s re-election. Hajjar appeared in a publicity sequence aired on government TV, criticising United States foreign international policy and praising China and Russia, Assad’s allies, for representing the “will of the peoples”. The other candidate, former member of parliament and minister Hassan Nouri, has criticised Assad’s economic policies but says he supports him in his war against “terrorism”, the term the government uses to refer to the armed opposition.

Building the Syrian State, one of the few opposition parties that the government allows to work in areas under its control, has called on people to boycott the election. In a statement, the movement said that “more than half the people” will not be able to vote, meaning those in areas controlled by the opposition or living as refugees abroad. Like Sarah, regime opponents from the Syrian coast – Assad’s home region – say the election lacks integrity. Montajab, 36, is a journalist from Banias who lives in Damascus. He is constantly in fear of being arrested for writing articles critical of the regime, and was previously detained for being involved in anti-Assad protests in 2011. Commenting on the candidates, Montajab said, “These candidates are part of a set-up by the regime. The public doesn’t know them. The conditions set for approving candidatures prevent any of the opposition leaders abroad from running.”

Under current election law, candidates need to have resided in Syria for the past ten years continuously. That excludes members of the opposition Syrian National Coalition. An application to stand also requires approval from 35 members of a parliament controlled by a coalition led by the ruling Baath party.

The identity of the candidates is not the only thing deterring Assad opponents from voting.

Sami, 41, is a pharmacist from the coastal city of Tartous who currently lives in the Damascus suburb of Jaramana. Sami has the impression that the government is trying to force people into voting. He says a government employee knocked on his door, asked to see his identity card, and then recorded his name and ID number. “When I asked the employee why he needed my ID, he said a polling station was to be opened in our neighbourhood,” Sami said. “The employee also said that my neighbour, who wasn’t at home at the time, should go to the relevant government office to register as a voter.”

Sami is disappointed that the government is still trying to control people’s choices, despite the protests and the armed conflict that Syria has witnessed. “After three years of bloodshed, nothing seems to have changed,” he said. Sami says he has never voted in the past, whether in municipal, parliamentary or presidential ballots, describing all elections in Syria as a “ridiculous farce”. “Everyone knows the things that take place during elections. Sometimes the same person votes more than once. Also, there are people who give their IDs to others to use them to vote while they are sitting at home,” Sami said.

The upcoming presidential election is expected to take place without supervision from neutral countries or organisations. The government has invited “13 friendly countries” to observe the elections. Two members of Russia’s parliament are expected to participate in monitoring the ballot. Iran, which is helping the regime battle the opposition, announced through its foreign ministry that it too might take part.

Assad’s electoral campaign has chosen the slogan “Sawa” (together). Billboards and videos posted on YouTube or aired on Syrian TV feature phrases like “Together against terrorism” and “Together we rebuild.” Opposition activists have turned the slogan against Assad. Pictures circulating on social media carry slogans like “Let’s kill together,” or feature the word “sawa” alongside portraits of Assad and Iran’s Supreme Leader Ayatollah Ali Khamenei, suggesting that Iran dominates the Syrian regime.

Ammar, 27, who is studying to become a teacher and hails from Jableh in Latakia province, invoked the same slogan with bitter sarcasm. He recalled the killing of his two brothers during the war, and said, “Instead of voting together, let’s die together. There is no one left.”

Other people from Latakia province, however, express support for Assad. “Whether you agree with President Assad or not… you have to admit something – Assad was able to get [recognition] from the whole world,” said Buthainah, 25, who is studying engineering at the University of Latakia. “All plans to oust him have failed, so he deserves to be a statesman. I support his candidacy and I will vote for him.”

Lina, 28, a government employee from Jableh who is also studying at the University of Latakia, said, “Bashar al-Assad is the best person to lead Syria. We are in a state of war, yet the state is still able to pay its employees and we continue to enjoy electricity despite the continued targeting of gas pipelines…. The only thing we have lost is security, and we will soon regain it thanks to the Syrian army.”