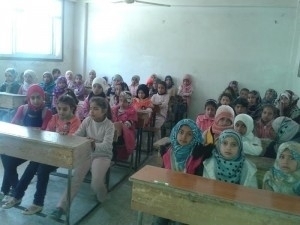 As schools have reopened in ISIS-controlled Deir-ez-Zor in eastern Syria, teachers are awaiting a new curriculum and must now teach boys and girls in separate classes.

ISIS, also known as the Islamic State, took control of Deir-ez-Zor in the summer.

When the group closed schools in early November, local people initially thought that it had done so for safety reasons due to the US-led coalition air strikes.

Students and their parents had participated in demonstrations calling for them to reopen.

But following a meeting on November 5 between ISIS officials and school administrators in the city of Mayadeen it became clear that the purpose of the closure had been to make changes to the curriculum and make arrangements for boys and girls to be educated separately.

“The meeting revolved around prohibiting gender-mixing between male and female teachers and students,” Khaled Alwan, the head teacher of a primary school in Mayadeen who attended the meeting, said.

According to Alwan, the ISIS official who called the meeting asked headteachers to divide the school day into two, one half for girls and female teachers and the other for boys and male teachers. Schools were also told to teach Islamic studies until the new syllabus was available.

“The official asked principals to teach the Koran to students as they wait for the new curriculum to be adopted by schools in areas under their control,” Alwan told the Damascus Bureau.

The new syllabus is expected to largely exclude academic subjects in favor of religious teaching. In September, ISIS eliminated Physics and Chemistry from the curriculum in schools under its control.

“ISIS informed [teachers] that [they] shall undergo a religious instructional course for one month, and that ISIS officials were currently developing a new curriculum instead of the current ‘infidel’ education,” a statement by the British-based Syrian Observatory for Human Rights said last month.

Azzam al-Mustapha, a primary school teacher, confirmed to Damascus Bureau that his school had adopted the changes.

“We will be teaching only Arabic and Islamic studies without any books,” he said.

“I agree with the ISIS in its separation of boys and girls in school, since that is a basic aspect of our religion,” Azzam al-Mustapha added.

However several others who spoke to Damascus Bureau have expressed fears about the new system, particularly the new syllabus.

Alwan is worried about the consequences of teaching Islamic studies and ignoring non-religious subjects.

“Teaching this curriculum will breed an extremist generation,” he said.

Yahia al-Omar, 33, the guardian of one of the pupils at the same school, is also worried.

“We will end up with a generation that only knows a culture of weapons,” he told Damascus Bureau. “Does ISIS plan to import doctors and engineers and craftsmen then?”

Nour Mohammad, a 19-year-old high school student, is anxious about her future if the situation remains the same.

“I agreed with my father who lives abroad that I will stay with him to continue my college education after I earn my high school diploma,” she said. “I worry that this will only materialize in my dreams because of the Islamic State’s policies and the curricula they are going to force us to study.”

Besides the changes to the curriculum and adopting single-sex classes, ISIS has also demanded that all teachers cut themselves off from the Syrian regime in Damascus and stop receiving their government-issued salaries. ISIS promised to compensate the teachers every three months with equal pay.

Teachers, including Azzam al-Mustapha, who is close to ISIS, largely opposed the move.

“I object to disengaging from the regime and not receiving our salary from there,” he said. “No one can guarantee that ISIS will continue to pay our salaries if we cut off ties with the regime.”

Damascus Bureau visited an elementary school in the eastern suburbs of Deir-ez-Zor where the school principal had implemented the changes.

The school day, which runs from 8am until noon, is now divided into two halves, the first for female pupils and the second for males.

Despite the changes, the number of pupils at the school has recently increased, something the school administrators attribute to the large numbers of displaced people who have come to the area.

However an issue that has come up is an imbalance of male and female teachers.

“We have run into some problems since we have too few female teachers, while there are a number of male teachers who have no place in any of the classes,” Mohammad Fawzi, a staff member at the school, said.

“It seems as though ISIS is trying to make us hire women from their ranks.”

An education ministry source told Damascus Bureau that since the changes have been adopted, the ministry intends to stop paying a large number of teachers and administrators.

“Officials in the ministry told me that the regime will stop a number of salaries, using the teachers’ refusal to sign up for reserve forces in the Syrian army as an excuse,” the source said.

“However, the real reason is the regime’s fear that they will teach the new ISIS-issued curricula.”

In what were previously opposition-controlled areas like Deir-ez-Zor, local councils have been in charge of the education system for the last two years. The councils had been able to keep schools running and set up examination centers for middle and high school pupils.

However, since ISIS has taken control, these local councils are powerless to act.

“The council is unable to offer the minimum of what is needed for schools to operate,” Issam Mohamas, the head of the education department at one of the local councils in the suburbs of Deir-ez-Zor, said. “Even today we cannot argue with ISIS about the curricula to be adopted or about the way [pupils] are to be taught.”