Syrians are opening restaurants in new host countries, filling the void of pain and nostalgia 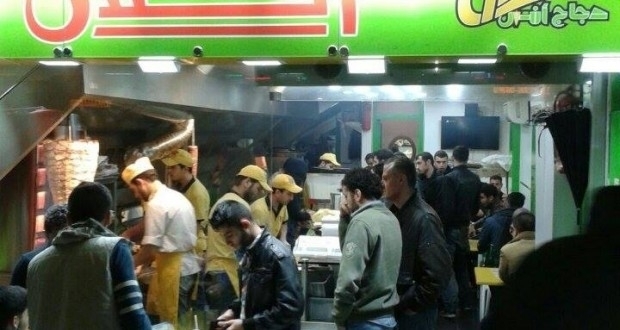 Syrians didn’t leave their country with just their empty hands; they took with them the aromas of their kitchens to fill the streets of neighboring countries.

To Lebanon, Egypt and Turkey, they brought the Syrian shawarma. The jasmatiyah desserts and the halawa of Homs migrated with them. Harisa of Tiba followed the refugees through the ice cream of Bakdash that cooled up their hearts which burn with nostalgia. Syrian coffee accompanied their mornings in the countries of refuge, and relieved some of their longings.

Many Syrians, forced by the circumstances of war to leave their homes, moved their businesses to new countries of refuge, and restaurants have filled a large share of these investments which help them to bear the burden of asylum.

Syrians – who are not used to traveling- see in Syrian restaurants a chance to keep the memories and heritage associated with the foods that have been part of their culture, and to feel that part of the country has accompanied them in their flight.

Syrians who used to go to Hamidiya market and used to stop at Bakdash to eat its famous ice-cream. It is hard to mention Homs without thinking of its desserts, while the famous Tiba station on the road between Homs and Damascus forms part of the memory of the Syrian travelers.

As one Syrian, who buys Halawa al-Jubn in Istanbul, explained, "the details of the place are not important, but when we eat it, we feel we are in Homs, we see its streets and smell them".

Another Syrian said he misses the traffic jam of Jasmatiyah Street in the Midan neighborhood and the sounds of people calling out for various food items.

Syrian restaurants have been received well in the new markets. Jordanians consider them a good chance to increase the quality of their restaurants, while the Egyptians like the Syrian food, especially as it is sold at affordable prices.

As for Turkey, which is not used to importing food, the Syrians have opened the door for new restaurants and foods. There has been an increase in the number of Syrian restaurants which has been a good opportunity for fair competition between the Syrian kitchens and the Turkish kitchens, which still boast about its ancient traditions.

The Syrian kitchens have not been limited to restaurants, but also spread through the women who found the opportunity to produce Syrian breakfast items, like makdous and jams, which formed a major source of income for them.

Syrians who are trying to overcome the difficulties of refuge by working and maintaining their heritage and memories have not forgotten the cause of their displacement, so it becomes present in their discussions at any Syrian restaurants. But Syrian food has managed to unify, in a way, what politics had divided.