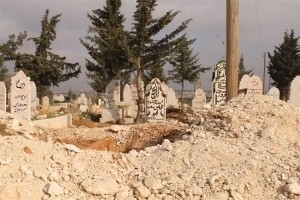 When a muezzin in the opposition stronghold of Kafr Nabel called people to funeral prayers for a fallen Syrian Army soldier most people attending the mosque that afternoon left and went home without joining in. Only the soldier’s relatives and neighbors stayed.

Kafr Nabel, in Syria’s northwestern Idleb province, has been under opposition control since August, 2012. According to the United Nations more than 200,000 people have died in the country’s civil war since it began in March 2011.

Anyone in Kafr Nabel who has remained loyal to the regime and dies fighting against the armed opposition is not given a proper funeral and their death is not announced publicly in line with custom. When a funeral is held, it is not one that befits a fallen soldier and often only the deceased’s relatives attend.

Abu Teem recently lost his son who died while fighting for the regime. The city’s records show that he was killed at the hands of the Islamic State of Iraq and Syria (ISIS). Although Abu Teem knows the reality of the opposition-controlled town, he felt he still had to announce his son’s death at the mosque. He says his son had tried repeatedly to defect from the regime but had been unable to do so.

“I knew that many people would not approve of announcing his death through the mosque loudspeakers as is the custom in the city. Even those closest to me asked me not to do it because they said he died fighting for the wrong side,” he said. “Despite all this, I decided to announce his death at the mosque, since we must do so regardless of the politics of the deceased.”

According to Abu Teem “not many people participated” in the prayers he held for his son.

“I still opened my house for the funeral,” he said. “I know my son well, and I know that he never hurt anyone. Only God can judge people."

Debates abound in Kafr Nabel every time a government soldier dies. Some make excuses for the deceased and believe they are still entitled to full funeral rites and a formal announcement of their death. Others believe they should not be granted a religious ceremony.

One soldier who defected from the regime, Fares al-Jamal, says the latter view is unfair. He argues that some soldiers have remained with the regime because they cannot defect. He uses himself as an example, explaining that he was unable to defect until after he received official permission from his army regiment. He then defected and fled.

“It is unfair to deny prayers in the city for those who were killed as regime soldiers- some may have simply not been able to defect,” he said. ”We need to understand their situation.”

But other residents of Kafr Nabel take a different view. Ahmad Hbeich, 24, is currently studying religion and he is opposed to members of the regime being granted a funeral.

“Those who died fighting for the regime betrayed the blood of the martyrs,” he said.

“There is no excuse for people who died on the side of the regime. They are not prayed over, their deaths are not announced, and they are not buried in Muslim cemeteries.”

The local council in Kafr Nabel has not made any pronouncements on the subject, preferring to let individual mosques handle things.

“We do not intervene in this issue,” said local council head, Adnan al-Qassem.

“We only document the deaths in the city, whether the [deceased belongs to] the regime or [is] with the opposition. The religious committees elected by the residents of the city to run its religious affairs are responsible for funerals and the decision is ultimately theirs.”

Each mosque in Kafr Nabel is overseen by a committee of residents. One member of the committee responsible for the Aziza Mosque in the east of the city who preferred to remain anonymous told the Damascus Bureau that he opposes the granting of funerals to members of the regime.

“People who remain with the regime choose to stand with the wrong side,” he said. “The committees do not know when a funeral will be held for them in the mosques. If we are told beforehand that there will be a funeral for a regime soldier in the mosque we are responsible for we will of course refuse to pray for him there.”

Afeef al-Ammour is the head of Kafr Nabel’s general authority, a body elected by residents to run the city’s affairs, such as forming the local council. Not only does he believe members of the regime are not entitled to a funeral, he does not consider them residents of the city.

“Even if my own brother stayed with the regime and was killed I would not pray for him and would not let anyone bring his body to the city for a funeral,” Ammour said.

Um Ammar, a 45-year-old housewife, takes a more sympathetic view. She considers these soldiers sons of the city, and as such, believes they ought to be prayed for.

“They were not able to defect from the regime. We know very well how hard that is,” she said. “Many have been killed trying.”

He agrees with Hbeich and Afeef when it comes to those who remain loyal to the regime of their own free will. But he supports the argument that some cannot defect from the regime and must therefore be granted a funeral.

“Some soldiers are prisoners in their military regiments,” he said.

“Many of them were killed by the regime, and they ought to be prayed for and given martyr funerals.”