Farmers in the village of Al-Khareeta are set to profit from new project, while some see further benefits too 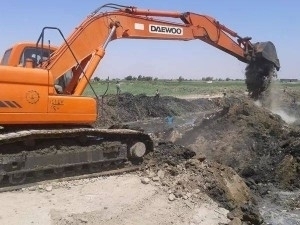 The authorities in the Syrian province of Deir-ez-Zor have begun work on an irrigation project in the village of Al-Khareeta that will drastically reduce costs for local farmers.

The project, which is set to cost approximately 100,000 US dollars, aims to revive a canal that dried up during the 1970s after a dam was built in the Euphrates River upstream in the northern city of Raqqa.

This project is continuing despite the area being under the control of Islamic State.

The canal is more than 12 kilometres long and 14 metres wide. The water was used to irrigate approximately 1,000 hectares of farmland and it provided more than 60,000 people with water.

Radwan, 26, who inherited a plot of land from his father, is excited that the new development will enable him to farm an area that is currently too dry to produce any crops.

“I inherited this land but I did not grow anything on it because it was too expensive,” he said. “Now I will start plowing and cultivating it since it is next to the canal and irrigating it is now easy.”

Mohammad Hassan, the spokesperson for the Al-Khareeta local council, said the project would lead to considerably cheaper water for farmers in general.

“It will decrease the cost of crop irrigation by 50 per cent,” he told Damascus Bureau from Turkey where he is seeking funding for other local development projects. “Residents and farmers’ associations will be able to use water from the canal for a small fee determined by the Al-Khareeta local council.”

The local council in Al-Khareeta began working on the project in August 2013.

Hajj Abdallah, a local resident, hopes that the authorities will see the project through to completion as there have been concerns about the arid land for years.

“This work reminds us of our youth.” he said. “Engineers used to constantly worry about the desertification of the land, but they never actually did anything about it.”

The project is a response to increasing levels of desertification in the region.

”The project came about after difficulties in irrigating large swathes of land led to a decrease in ground water levels to 13 metres, which is huge. It can eventually lead to the desertification of the land,” said Hassan Feehan, an agricultural engineer.

“The sand storms sweeping through the eastern region are due primarily to the disintegration of the soil and the desertification of previously fertile land used by farmers and the state,” he added.

Besides arable farming, Feehan cautions that delays in completing the project will negatively impact the area’s livestock.

“The problem of desertification and drought does not only affect agriculture, but dust and sand storms also adversely affect the growth of desert plants. This makes grazing livestock more difficult in these areas,” he said.

The project also involves the building of a number of bridges to connect different islands that will be formed once the canal is flowing again.

While this will increase costs, the bridges will also serve a broader function in the context of the ongoing conflict.

“The project costs more because of the construction of bridges to link the areas on either side of the canal,” said Amin al-Arsan, 32, the chief project manager. “On the other hand, we are proud of these bridges because we see in them the bridges destroyed by regime forces, such as Siyasa Bridge, the Moaleq Bridge, and many others.”

Mahmoud, a local resident, believes the project will actually have a dual function by also boosting tourism when the war ends.

“This canal flows into the Euphrates in the town of Ayyache,” he said.  “At first sight, a visitor might think that it is one of the Euphrates’s tributaries. This will eventually turn the area into a tourist destination after our revolution succeeds.”