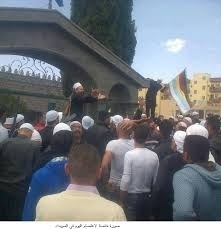 "If Bashar al-Assad has sold Syria to Iran, that is up to him. But we have not, and desire a united Syria. You should tell him that our dignity is more valuable than him. We would rather eat dirt than give up our dignity.”

This is a quote from a long public speech by a Druze sheikh named called Abu Fahd Waeed al-Belaos, who has been one of the most prominent Druze sheikhs who have broken their dependency on the regime, after mobilizing young, religious Druze around him as a religious authority. He soon gained a popular base in the Suweida governorate with a presence on the ground, weaponry, and organization.

This obscure sheikh, who has suddenly become famous, is from a simple family, not a religious or prominent family, unlike the traditional chiefs that descend from families that have alternated in their control of the religious affairs of the Druze for many decades in coordination with the political authorities. This makes him close to the general public, who suffer from the conditions created by regime forces, which oppress them in various ways, and the Islamist opposition forces, which consider Druze cowards for failing to join the revolution.

Belaos’ headquarters aere in one of the border villages called al-Mazra'a, which witnessed one of the most important battles of Syrian rebellion against the French in 1925. This village is in contact with the rebellious villages of Daraa province. Belaos has succeeded in mobilizing thousands of youths, and provided them with an authority in the absence of any capable civilian project to unite the Druze in the face of dangers that beset them. Al-Mazra'a village witnessed the first protests against the regime, and Belaos’ power was demonstrated when his followers demolished a barracks belonging to the security forces that had been converted into a checkpoint used to harass villagers and travellers.

This was followed by a fiery speech byBelaos in the presence of religious authorities and a pro-regime political figure. He let loose his fury at the regime's policies and behaviors, accusing Bashar al-Assad of selling Syria to Iran and leaving the governorate in the hands of the security services, which Belaos has openly threatened to attack. He noted that the inhabitants of Suweida had faced treachery by the regime in many places, such as the Druze villages in Idleb that the regime surrendered to the Nusra Front. The regime has also exposed the Druze to massacres in many other locations. He also mentioned the detainees who have been killed in the regime jails, and whose parents were not allowed to take their bodies or bury them.

This shocking and unexpected speech met severe disapproval by regime loyalists. Dozens of pro-regime websites have insulted Albelaos and the Druze, accusing them of treason and rebellion, raising the tone of revenge and threats against the Druze to unprecedented levels. This may start a new phase of the conflict – one between Druze and Alawites – if it is not brought under control.

Finally, the secular opposition suspects the Sheikh al-Belaos movement of being a religious project opposed to the civil revolution they seek. Many secular revolutionaries have called the movement the “ISIS of the Druze,” and see the sheikh as one of the religious leaders who now lead hard-line movements based on religious doctrines that are increasingly radical.