Since they are not allowed to set up their own checkpoints except in a few areas, foreign fighters stand beside the regime’s soldiers as they stop the buses to take some of the passengers 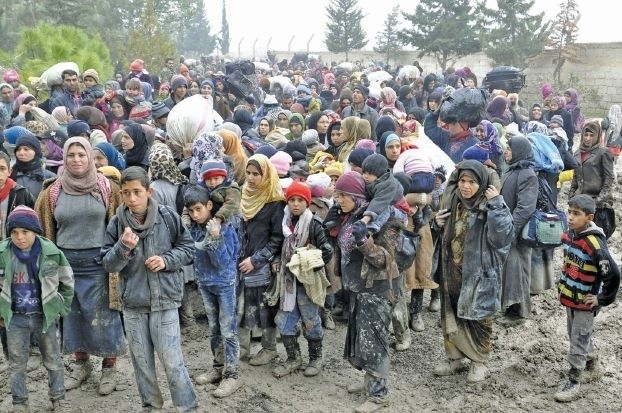 When the checkpoints stop the public transportation buses, known as vans, passing near the fighting fronts, “Our hearts—for those of us who live in certain areas of the capital—start to beat fast.” Young passengers might be forced out of the buses, not for security or religious reasons, but merely because a certain number of young people are needed. “People from certain areas are being targeted,” said one of the citizens of Old Damascus while he spoke about the current displacement in the city, and in certain neighborhoods in particular.

Since they are not allowed to set up their own checkpoints except in a few areas, foreign fighters stand beside the regime’s soldiers as they stop the buses to take some of the passengers. Sometimes the soldiers force a number of people out of the buses—the same number of people they need to perform forced military labor, including building sand berms in Sayeda Zainab. This area is secure now, and there is no fighting there as occurs at the fronts of Jobar, Daraya, Al-Tadamoun and Ghouta. The people here will perform all kinds of forced labor like filling sand bags and digging tunnels before they are set free several days later.

“These checkpoints are mainly for ‘shabeeha’ [regime-backed fighters], accompanied by some foreigners. The exception is the Sayeda Zainab area and the Damascus countryside, which are completely controlled by the foreigners,” said a man who insisted on remaining anonymous. He described people being the forced out of certain areas of Damascus in an attempt to change the demographics in order to put new people in different parts of the capital. This is especially true in places like the areas of the Daraa-Damascus Highway, the Homs-Damascus Highway, Old Damascus, and Sayeda Zainab.

“Inside Old Damascus, young people, especially Sunnis, are being targeted by the Shiite militias supported by the shabeeha,” according to an individual pursuing this case and local witnesses who refused to give their full cooperation because they fear revenge. “In an attempt to force them to leave, young men are being threatened with arrest, being sent to obligatory military service, or with several days of forced labor, like digging tunnels along the battle fronts. Many houses whose owners left seeking better places to live were occupied by Lebanese and Iraqi militias, assisted by the Shabiha and a law issued by the government,” they said. It is war that has forced people to leave silently or to remain under the rule of foreign forces.

The laws that people are talking about are published in the regime’s newspapers. On May 21, 2014, Al-Baath newspaper published an article announcing that “Closed houses that are secure will be opened up for rent, and the rent will be kept for the owner’s benefit.” These safe houses are located in the old city, and the amendments announced in the newspaper are merely cover-ups for the process of forcing people to leave to replace them with others—including the families of fighters and leaders of foreign militias from Afghanistan, Lebanon, Iraq, and elsewhere, as well as displaced individuals from certain sects and regions of Syria.

A committee appointed by the Syrian state receives the rents in order to give them later to the owners who either left the country or left the areas under regime- and foreign militia-control.

Most of these houses are located in the old city, notably the Al-Amara neighborhood, where Alsaida Ruqaia’s shrine—considered a religious symbol for Shiites—is located. Most of the houses in these areas are now occupied by the families of Lebanese and Iraqi fighters. Locals said these foreigners were given Syrian citizenship, but we didn’t have the chance to confirm this. Nevertheless, it is common that foreign fighters carry official identification cards saying they are members of the Syrian army.

These areas are targets for shelling from unknown sources. The opposition does not claim to be behind most of this shelling. The residents of these neighborhoods have escaped, while the foreign fighters have moved in under the sight of the residents who fear speaking to these men who have Asian features.

The residents of the capital described how these foreign fighters occupied the houses of Jews who left prior to and during the Syrian revolution. Omar, a former fighter in Damascus and its countryside, said that there had been more than 20 Jewish families, though most of them left the country.

This neighborhood was inhabited by Shiite, Christian, and Sunni families. Today, this neighborhood has been turned into a fort for foreign fighters who arrived from various countries with the help of regime forces.

One can hear different accents, foreign languages, songs, and Shiite chants. All of this, along with continuous armed demonstrations in the streets, has frightened the people. It has also forced them to leave to escape sectarian revenge for accidents, especially if a fighter was killed in battle or during a funeral. Of course, Christians were not safe from the foreigners’ assaults. The pro-regime Shiite militias detain people or threaten them with obligatory military service in order to force them to emigrate.

At the beginning of the revolution, the Christians were divided. Part of them supported the revolution and participated in the demonstrations, while others supported the regime, especially after the emergence of Al-Nusra Front and ISIS. But as the Shiite extremists emerged, the Christians have decided to leave the country, even though they still support the regime. The escalation of the demographic shuffling and practices of allowing people to occupy abandoned houses forced many Christians to leave their weapons and all they received from the regime to emigrate to safe places.

One man who stopped fighting to emigrate spoke about his experience, saying “I was a member of the Public Defense Groups,” (a Christian group that fought with the regime), “and I fought in battles to regain control over Sbeneh in the south of Damascus. There, I witnessed how the Shiite militias murdered Sunni families on a purely religious basis. Even though I am against the so-called “revolution,” and I am supportive of the state and the Syrian army, I have decided to leave the country because these extremists are occupying our houses and murdering people for no clear reason.”

The Christians’ houses were not exempt, so if Christians decided to leave their homes in Old Damascus, Bab Touma, Alqassaa, Dwelaa and Al-Abassieen, they would be occupied by the foreign fighters. Though there is no record of direct confrontations between the Christian and Shiite fighters, many Christian families prefer to leave the capital, even if this means losing their houses.

The people of the capital explained that residential blocks controlled by Hezbollah are the largest in Old Damascus and the whole city. Most of them told stories about secret prisons for Hezbollah that they heard about from relatives or acquaintances who had been there, or from Syrian Army officers who received money in return for these stories. These secret prisons are for temporary detention, where detainees are questioned before they are moved to unknown places.

In all the secure blocks controlled by Hezbollah—either in Sayeda Zainab or in the city center, especially those areas that they have recently, like Alzyabia, Alhusseinia, Shabaa, Aqraba, Sbeneh and Almleha— people are prevented from returning to their homes, even to get their personal belongings. These areas remain completely under the control of the Hezbollah military forces that brought families to live there.

The situation in these areas is the same as the situation in Sayeda Zainab, where no one is allowed to enter unless they are Shiite: even the members of the Syrian Army are prevented from going there.

In return, Shiite families were moved from Alfawaa in Idleb and Alzahraa in the Aleppo countryside and other areas to live in these secure blocks. It doesn’t matter if they joined the Public Defense Groups and the shabeeha or not. Two people we met in Amman, Jordan spoke about the families that were forced to move there. Notable were those who drive trucks from Syria to the Gulf, and those who don’t believe in carrying arms for Al-Assad or the Shiite militias.

Returning to the legal aspects of the matter, the Syrian judiciary issued a law that forces anyone who wants to rent a house to obtain a security approval. But these approvals are no longer being given to anyone who wants to rent a house in Old Damascus, especially to those who are from certain sects. They are only given to particular groups, including Lebanese, Iraqi, Iranian and Afghani fighters.

In Kafersusa, people were given two months’ notice of evacuation before they were forced to leave. Needless to say, Kafersusa is one of the richest areas in Damascus and is located between Daraya and the capital.

Some neighborhoods that are located between the re-organizational area and Daraya are targeted. These areas contain hundreds of families that escaped the shelling and moved there because of the cheap rent. Sources said that the areas are being destroyed in order to be reorganized.

Jamal Youssef, the director for “Organization and Urban Planning” in Damascus, announced that the evacuation notices in the first re-organization region in the South East of Mezzeh are about to be signed, according to Althawra newspaper this March. Youssef pointed out that, “the notices will take two months before they are carried out. Whoever receives these notices will have to provide documents that prove their occupation of the properties to the project headquarters in order to obtain the proper compensation.” On the other hand, the people of Daraya talked about quick selling operations that happened through real-estates agents or other people at the same prices of the market.

In Jobar, a new organizational chart was going to be applied prior to the military campaign, and it is assumed that it is being destroyed in order to be reorganized.

To the northeast of Jobar lies the industrial areas in Alqaboon. There are people trying to buy the factories, claiming that these are fighting fronts and destroyed areas. In spite of the destruction, the pressure to buy and sell these factories continues. The same thing is happening in Ghouta, where houses and lands are being bought and sold.

These areas are filled with slums, like Al-Tadamon, Nesrin St., Almezzeh 86, Esh Alwarawar, Aldwelaa, and Alsomarieh, which is inside the capital, which are still inhabited by pro-regime residents. These areas have not yet been mentioned on any recent organizational chart.

The recent evacuation notices are considered an additional reason for emigration, and for the rearrangement of the demographic pattern in the capital, which controls the two main entrances and the heart of the city.