Unable to pay for medical treatment, Mazen is forced to endure a life of pain inside Jordan as he slowly succumbs to his fatal illness 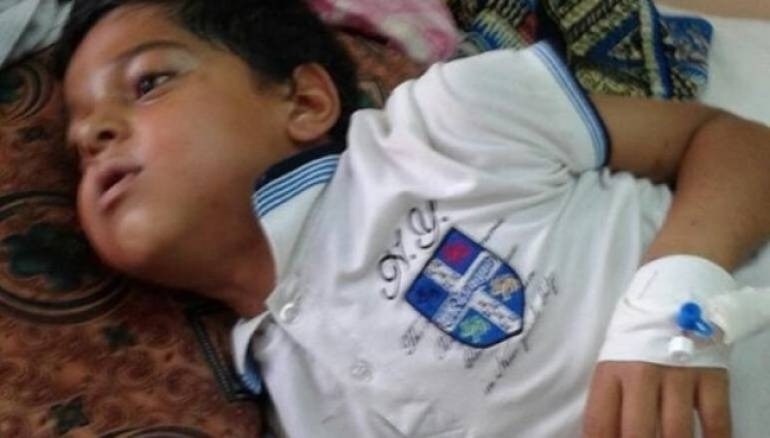 Suffering from acute leukaemia, Mazen Abdullah Mobarak lives as a refugee in the Jordanian city of Mafraq, where his family struggles to afford treatment for his harrowing illness.

Mazen’s condition was diagnosed when he discovered a lump in his neck. Three days later he became pale and started to vomit blood and red spots covered his body, his father told Zaman al-Wasl.

“Because of his bad condition, we had to take him to al-Zalil Hospital where he received platelets, but we were told that the hospital did not have the suitable treatment and facilities for his case. I then began my journey among medical centres and hospitals. All of them, even the Oon center, refused to treat my son after diagnosing him with leukaemia because the treatment is expensive and there is no one to cover the cost”, Mazen’s father detailed.

The child’s father mentioned that he may be able to cover the cost of some tests and samples for Mazen, but he cannot afford for chemotherapy treatment at a cost of 300 Jordanian dinars a session. Mazen requires two session a month.

“Still, the chance of recovery less than 60 percent, and Mazen needs a sterilised environment because his immunity is weakened, but we cannot get that environment when we live in a village next to a stable”, his father explained in anguish.

Mazen’s father expressed his will to return to Syria, hoping to die with dignity from shelling rather than dying hundreds of times each day from humiliation and begging.