Banias, an oil refinery city on Syria's Mediterranean coast, is home to one of the Assad regime's secret barrel bomb factories 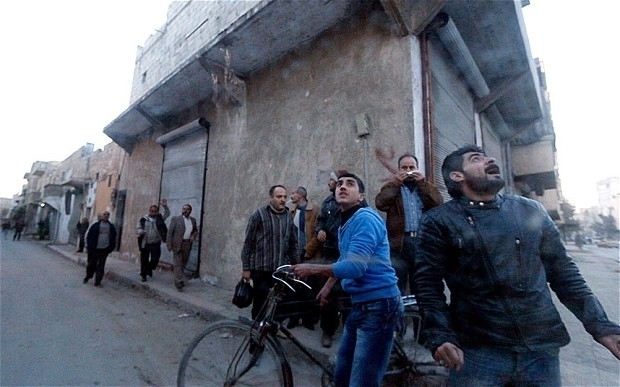 The barrel bomb: a tremendous iron tank filled with explosives and organic fertilizers, and stuffed with sharp metal objects. Its weight ranges between a quarter to half a ton, and is dropped randomly from regime helicopters flying at high altitudes in order to avoid opposition fire. The barrel usually targets opposition-held cities or villages, deliberately causing death and injury among civilians.

“Nazih”, a civil engineer, watches a video on YouTube on his computer screen. The video shows a helicopter flying above Daraya as it drops a big black object that quickly plummets, disappearing for a second or two behind a block of buildings before a horrific explosion erupts. The smoke, the dust and the cries of the photographer all contribute to the tragedy of the scene, suggest disaster befell on that street.

But Nazih knows another side of the story, one that took place 300 kilometers away from his home. Nazih knows the story of the plant that produced and produces these terrible death instruments.

In a 2013 report, Amnesty International considered the use of explosive barrels a "war crime" and an example of unjustifiable "collective punishment". In Aleppo alone, according to the report, the barrels destroyed a quarter of the city's neighborhoods, transforming its landmarks forever.

We now move from the devastated cities of Aleppo and Daraya to a place with an unexpected link to this story. Let us return to Nazih's small coastal city of Banias, now a quiet place after rising to the forefront of events following the 2011 demonstrations and a civilian massacre in 2013.

Banias is home to the "barrel factory", as Nazih calls it. An employee at the Banias refinery for a decade, the 40-year-old engineer claims to have never presumed something secret was going on within its walls.

When Syria's oil production decreased by 90 percent following the rise of ISIS, which seizied a majority of Syria’s oil wells in the process, work at the refinery stopped.

"They are using the maintenance and pipelines welding workshop to make these barrels", says Nazih. For around a month, Nazih has been aware of the factory’s true purpose, but it is clear from his behavior that he is still in a state of shock.

"One of my tasks required me to visit to the headquarters of a maintenance and welding workshop. I saw the construction of vast empty barrels in the rear yard, there was no need for further explanation – it was clear", Nazih continued.

Nazih headed to his colleague, an engineer and the chief of the workshop. An Alawite man in his 50s, Nazih finds him witty and enjoys drinking tea with him from time to time. When Nazih inquired about the barrels, the workshop chief simply replied: "We are manufacturing barrels to kill the dogs and burn them".

"I tried to explain to him that the barrels are a random and blind weapon, he did not listen … he was perhaps annoyed", Nazih says. The chief of the workshop explained the details of making the barrels with pride. He talked about the bolts, the large nails and the sharp metal triangles added to the barrel full of explosives, Nazih said.

Curious, Nazih asked: "How much does each of them cost?".

Aleppo, the countryside of Idleb and all rebel-held areas have suffered thousands of deaths and the destruction of homes due to the havoc caused by these barrels.

"It is terrible that 75 dollars can tear people's apart lives without distinguishing between civilians and militants, but it is more terrible to celebrate this and portray it as a military achievement", Nazih comments.

A spokeswoman for Lattakia’s Coordination Committee Media Office said: "The Banias plant is probably not the only one manufacturing these barrels. There is the iron plant owned by Ayman Jaber located between Jableh and Banias, not far from the first one".

Some regime supporters claim the use of barrel bombs did not start at the beginning of the events in Syria, but only when the Syrian community in the interior provinces transformed into an incubator for terrorism, and therefore they should be faced by all possible means.

Human Rights Watch, the United Nations and Human Rights Commission is not convinced by the argument. Neither is Nazih, who sits contemplating the quiet Mediterranean from the balcony of his home in Banias. He thinks of the fierce war being waged in his country, as he watches a helicopter taking off from Jableh Airport. He cannot avoid thinking about its cargo – a few barrels produced by the death factory next to his home. The helicopter turns eastward, heading towards the depths of the country, towards a new round of death and war that seems to have no end in sight.