The Assad regime's recent setbacks did not only push its "allies" to act to defend its interests in strategic areas, but also pushed its "enemies" to move to save it – or the rest of it – preventing its fall in the remaining Syrian geography 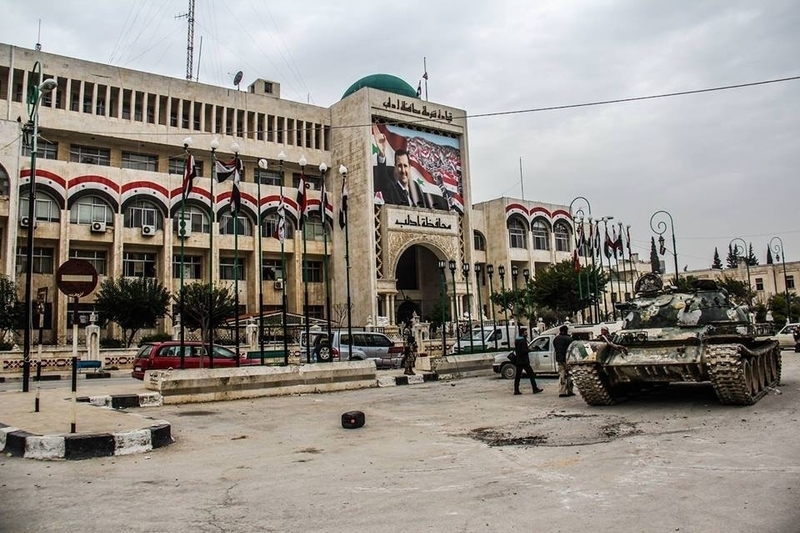 The armed opposition’s victories in the northwest of Syria were not only alarming for the regime’s allies in Tehran, Beirut and Moscow, but also for the "Friends of Syrian People" in London, Paris, Washington and a number of Arab capitals. The recent concern is in large part due to the possible "premature” collapse of the regime, and the nature of the war’s victors. These forces are not the much talked about "moderate factions", but Islamist factions, with some included on the United Nations list of designated terrorist organizations.

The Assad regime's setbacks did not only push its "allies" to act to defend its interests in strategic areas, but also pushed its "enemies" to move to save it – or the rest of it – preventing its fall in the remaining Syrian geography.

Perhaps some of the regime's "enemies" are concerned about its fall more than its "friends", as senior officials in major countries are convinced "the regime is about to collapse" and the beginning of the end has already begun. Apart from it debatable accuracy, this belief prevails, not only among analysts, journalists and "experts", but also among officials, and leaders of powerful countries. This time the belief is not a matter of desire and pressure to respond to the emotions of Syrian people, while inciting them to maintain the dynamic rebellion among the opposition, as was the case four years ago. The belief, this time, is based on “intelligence” from operation rooms which are said to follow every spot, neighborhood, street, clan, party, faction and organization on the Syrian stage.

The common fear of a premature collapse set out the diplomatic efforts of Washington and Moscow. What separates them is their approach to the "next day" following the regime’s departure, but what unites them is a common fear: the collapse of the regime and the possible alternative. The concerns of the White House about the Islamic extremist organizations and terrorists are no less than the concerns of the Kremlin about the consequences of an increase in Islamist influence through the Middle East, spreading to the disaffected Muslim communities in the Russian Federation.

The hope is that this concern will match the level of panic and become a common uniting factor that gathers the regime's "allies" with the Syrian people's "friends". US Secretary of State John Kerry visited the Russian resort of Sochi to meet President Vladimir Putin and Foreign Minister Sergei Lavrov in an attempt to push for a political solution and agree on approach for "the next day". This was the first serious action since the collapse of the Geneva II negotiations at the beginning of last year, and the first serious attempt between the two countries to solve the Syrian file following tensions after the outbreak of the Ukrainian crisis.

The move by Russia and the US is designed to incite an in-depth attempt to develop a political solution before it is too late, while avoiding wasting a new opportunity before players lose control over the Syrian issue.

The move also stems from new data that was non-existent two years ago:

1. The regime's setbacks and the decrease in areas under its control to less than one-third of Syria’s geography, in addition to the economic crisis in regime-held areas, the lack of human resources willing to fight, and the tension and fear inside the regime's strongholds.

2. The heightened threat of ISIS on all parties in Syria, the region and the world. ISIS has seized large areas in Iraq and Syria, erasing the border between them, in addition to growing doubts about the capacity to fight this organization. There are also concerns about the success of the declared strategy of "Iraq First" and "ISIS first" in the “complicated" Syria crisis, which no one is willing to get involved in – according to what can be understood from US President Barack Obama’s latest speech.

But the time will come to ask: What about Syria, and how would the international-Arab coalition fight ISIS?

3. The initial deal between Iran and the West over its nuclear issue, and the approach of a final deal by the end of next month, in conjunction with Iran's suffering from a drop in oil prices and its impact on Tehran's capacity to support the regime, all the while its militias inside Syria continue to face financial and human attrition. Here, one must also bear in mind that a final deal about Iran's nuclear power means preparations for the possibility of discussing the regional files that had not been formally discussed before, particularly the Syrian file. Didn’t Iranian President Hassan Rouhani say that the initial deal is a "step", and signing a final agreement could pave the way for the discussion of regional files?

4. Operation Decisive Storm in Yemen, which was legitimized by regional and Islamic countries, and based on UN Security Council's resolution. Decisive Storm exhibited the limits of Iran’s role in the region and the need to stop its expansion, also stressing the importance of the Syrian issue, especially with talk of the need to renew the expired regional order.

5. The implicit tension between Moscow and the Syrian regime. Yes, there is an unspoken tension. Not only because the Russian government is convinced that the regime did not deal appropriately with the two sessions of the Moscow Forum, but also because President Vladimir Putin's message to Damascus through Deputy Foreign Minister Mikhail Bogdanov included suggestions for "confidence-building measures", such as the release of detainees, the allowance of humanitarian aid and the start of a political dialogue to form a national unity government. It was reported from a senior Syrian official in Damascus that he asked Bogdanov about "Russia's strategy and tactics towards the Syrian crisis", Bogdanov purportedly replied: "the crisis is Syrian, and the strategy and tactics must come from the Syrian leadership". The deputy foreign minister also advised not to rely on Russian and Iranian financial support for the "reconstruction" of Syria, as Moscow estimates the cost of reconstruction will exceed $350 billion USD – $100 billion more than United Nations estimates.

6. The serious fear of a sudden development that changes all the "rules of the game". What if ISIS entered Damascus? What if a large military brigade collapsed? What if there was a coup? What if the terrorists seized non-conventional weapons? What if senior Syrian officials left the scene for whatever reason?

These factors may lead us to believe in the availability of terms for a solution, but the fact is they only provide incentive for a serious attempt to find a solution to the Syrian quagmire. However, there are also other factors that make the solution difficult, if not impossible – currently and in the near future – unless something urgent takes place, or the Syrian file becomes a subject for discussion on the international-regional table beside other regional files.

It has become clear recently, and perhaps this impression will be strengthened with the passage of time, that Washington's ability to influence the events in the Middle East is declining. This was evident in Iraq and Yemen, as well as at the recent Camp David summit, and will not be much different in Syria. There is a major decline in US influence, while other countries in the region are greedy for a regional role in Syria. This will increase with the countdown to the conclusion of Obama's administration next autumn. A disturbing contentment increases day after day that Obama's administration deals with Iran the “enemy" as an “ally" in resolving the regional matters, and deals with its "friends" in the Middle East as if they were adversaries. It is no wonder a number of regional players have been encouraged to escape the brunt of this "friendship", and to alleviate its strategic cost in a changing Middle East.

Furthermore, the substantial dispute between players in the Syrian drama concerning the new Syrian regime or the new Syria and its regional position will continue. Technically, the disagreement exists and the gap is wide over the interpretation of the Geneva communiqué, especially with regard to the transitional government with full executive powers. Here, it must be noted that events have proven the Syrian regime takes everything from the Kremlin, except for advice.

The Syrian officials negotiate with their allies in Moscow and demonstrate the importance of their survival as they negotiate with their enemies in Washington, and explain the dangers of a vacuum … and the alternatives represented by ISIS and its sisters. This means that the survival of the regime's institutions is necessary for Russia's strategic interests, and the collapse of these institutions is a strategic nightmare for Obama's administration – which will be accused that its non-interference policy in Syria led to the same conclusion reached by President Bush's intervention in Iraq: the collapse of the institutions. From here, Moscow justifies arming the "military institution".

As for ISIS, some states see the organization as an enemy to be eradicated, while other countries see it as a platform to achieve strategic interests and develop major changes in the political map of each country. Other countries may see it a tool to pave the way to re-draw the external borders of states and internal boundaries of regimes.

The Obama administration has decided to look for a platform to gather all these elements, in an effort that requires a lot of diplomacy, concentration, time and patience – to invest in the common concern, and search for intersections between the international and regional agendas. Obama has instructed his assistants to choose the idea of establishing a "contact group", comprising of the two major powers (the US and Russia) and regional countries active in the Syrian file.