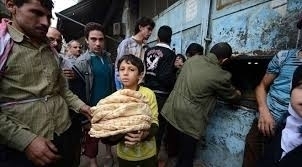 While international agencies and organizations increasingly call for rescuing Syria’s agricultural sector and securing production inputs, we find that Bashar al-Assad’s regime is going even further, as it plans to produce 5.5 million tons of wheat in the 2015-6 season – the production level has never reached this figure even during the most rainy years.

Agricultural experts argue that the regime’s plan, which surpasses the 2005 production record of around 4.8 million tons, does not correspond with the realities of the Syrian agricultural sector. This is because the sector suffers from the decline of cultivated lands – estimated at 40 to 60 percent – which is caused by fleeing farmers, scarcity of water and diesel, and unattractive market price of wheat.

Arfan Dadikhi, agricultural engineer and chief of the Syrian Grain Foundation’s Aleppo office, explains that the Ministry of Agriculture has never laid out a plan that reflects the true dimension of cultivated areas in Syria, and that the largest wheat production ever recorded was 4.8 million tons in 2005. According to Dadikhi, there were several factors behind this record, including 1.7 million hectares of farmland; these factors are no longer available to the Syrian regime because Aleppo, Raqqah and Deir-ez-Zor, which represent 43 percent of the entire cultivated areas, are no longer under the regime’s control.

Dadikhi added that Hassakeh – Syria’s veritable food basket where 45 percent of Syria’s wheat is grown – is divided between several parties of the conflict: ISIS, civilian militias, and the Assad regime. Dadikhi therefore asks how the regime would produce 5.5 million tons of wheat. “Unless (the regime) reclaims land on Mars and not in Syria,” he said, “the land around Tartous would certainly not suffice to produce 5.5 million tons, and wheat does not grow in the sea.”

Food Security, Only in Propaganda

Syria’s agricultural sector was the country’s main pillar of food security before the revolution; wheat was the backbone of this sector. Dominique Burgeon, the director of emergency and rehabilitation division of the U.N. Food and Agriculture Organization (FAO), stated: “Syria’s agricultural sector has been torn apart by conflict. We stress that an urgent support from donors is needed to ensure that farmers are able to deal with the sowing season next month.”

According to a recent paper published by the Carnegie Middle East Center, food security in Syria has eroded because of shrinking farmlands and water scarcity that affects urban and rural areas alike. The paper argues that declining production will suppress the market’s projection of future agricultural output, sharply raising the prices of agricultural products – even though Syrian families are already spending more than half of their income on foodstuff. In some areas such as Suweida, Aleppo and Hama, average spending on foodstuff has already exceeded 50 percent of total household income; in Daraa, it reached nearly 80 percent because the area has witnessed the heaviest fighting.

The Syrian regime’s media claims that its agricultural plan aims to “achieve food security and satisfy the national consumption of foodstuff”. This food security is what 9.8 million Syrians do not have, 6.8 million among whom live “in a critical condition of food shortage,” according to the latest joint report published by FAO and World Food Programme (WFP). FAO projects this season’s wheat production at 2,445 million tons; however, the overall production is 40 percent lower than pre-2011 level of production. The joint report asserts: “Syria faces a wheat supply shortfall of around 800,000 tons; the country requires 3.5 million tons of wheat every year (this number includes 23 million Syrians who resided in the country).”

Those who speak about food security have also neglected the 40 percent decline in the production of sheep and goat, while the poultry sector – an important source of protein – shrank by half. Facts on the ground have put much pressure on the agricultural sector. Battles and widespread security risks in whole of Syria mean that the production from the 2015-2016 season will be below the levels of the previous season because less land is now available for cultivation – which would be another blow to local food security.