"To the people abroad, I would say that this process damages the environment and hurts animals, too – maybe this fact could propel animal rights and environmental activists to help us because no one has done so until now.” 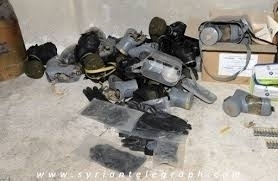 Following the siege laid by the regime forces on Ghouta in the Damascus suburbs, the city’s residents lost their means of livelihood; death became their only visitor. Many houses have already been destroyed because of the heavy bombardment the city has endured for the past four years. So the residents had to find novel ways to cheat death – sometimes primitive and even dangerous ways that would surely fend off death at their doorsteps.

“Because of the siege, we have no electricity, gas or fuel in the city of Douma, so we had to find some alternatives, even if they were harmful. We still need them to stay alive,” said Abu Azza, a former employee of the Assad government. Abu Azzam used to be an assistant physician at a public hospital but left his job shortly after the beginning of the 2011 revolution.

Some children in Douma wake up in the early morning, have a quick bite on any food they have found, and rush to the streets to start their daily job. They scour for plastic materials, and then deliver them to a shop in the city center that buys them. The children enjoy their moment of happiness as they rush to buy biscuits with the coins they earned, granting them a little sense of their lost childhood.

“I am so happy that I can help my parents and the people who remain in Douma. I have no problem getting up early; and I can buy delicious food with the money they give me when I am done,” said Omar, a small child from Douma.

When the plastic materials are gathered, a few men start a torturous and hazardous process: extracting fuel from the plastic. They first throw the plastic in a machine named the “chopper”, which cuts it into small pieces, and then they start a primitive process that burns the plastic inside overheated barrels.

“Do you want to witness impossible things taking place? Do you want to know what ‘impossible’ means? We extract fuel from plastic. Can you believe this?” asked Abu Hamzeh, a young man from Douma who left the college after an arrest warrant was issued against him for no obvious reason – or perhaps simply because he is from Douma, he wonders. After leaving college, he jointed the revolution with his family and friends when it felt like it was going somewhere, and while it was spreading to other cities and towns. The regime besieged them as a punishment for disobeying it.

“I have been doing this for three years since the siege began. If it were not for the job, life would have ceased here in Ghouta,” said Abu Hamzeh who chose life over death and dedicated his life to this job. He takes a small piece from an old carpet, throws it into the fire pit, then stirs it with a long wooden stick when plastic starts to melt inside the barrel. After a while, a dense, white smoke called “gas” and a yellow liquid called “diesel” start flowing through the pipes connected to a barrel.

We asked Abu Azzam if plastic materials were available in Ghouta and how important this process was for its residents. He answered in a sarcastic tone: “Plastic is available right now as our children collect it for us; when they are depleted, we will start to collect asphalt from the streets.”

His voice turned serious when he added: “You know we have no electricity here, so we can at least start the generators this way and use them to water our farms. We then harvest some tomatoes and cucumbers to stay alive. Of course, there are other uses such as heating and cooking.”

“These barrels could blow up and disfigure the person performing this process; other risks include diseases that affect the workers here like bronchitis, asthma, pulmonary embolism or even cancer,” said Abu Azzam.

His face turned red when asked if he wanted to send a message, and he said bitterly “to those inside [the regime] I would just say, have fear of God as you can see how people are dying here. To the people abroad, I would say that this process damages the environment and hurts animals, too – maybe this fact could propel animal rights and environmental activists to help us because no one has done so until now.”