"People can rarely afford to buy a full banana ... so I buy a few bananas and cut them into pieces so everyone can eat a small piece.” 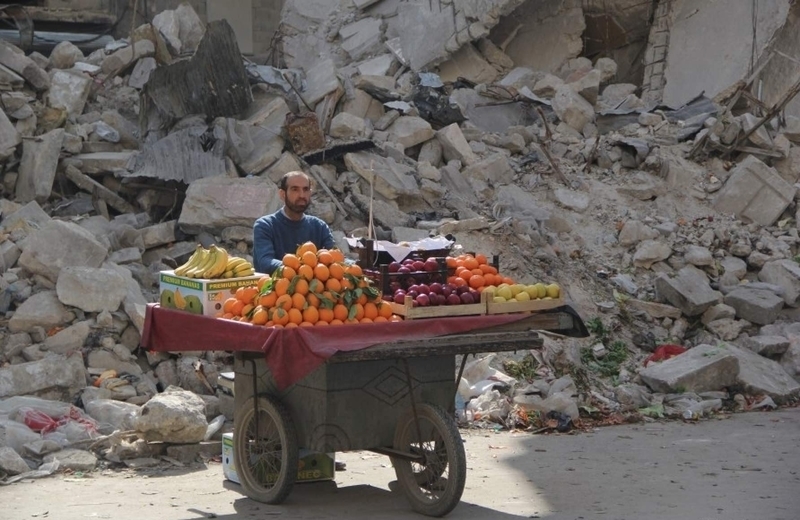 ‪Eating fruit is a foreign concept for many children born in Douma during the Syrian revolution – for some, a fantasy no less extraordinary than walking on the moon.

‪“I hid the apple in my pocket, as if hiding a piece of gold, and rushed home to split it with my mom. I was sure that my mom would be so happy to see it,” said Ahmed, a young boy from the Damascus suburbs.

‪Sitting on the ground in front of Abu Mahmoud lay a small red piece of cloth, and on top of it sat a ruler, a sharp knife, five bananas – one half-peeled with the other half cut into small pieces, 2 centimeters each.

‪“I don’t do this just to earn money, in fact I don’t earn much,” he said, “People can rarely afford to buy a full banana as they sell for 400, sometimes 500, pounds. So I buy a few bananas and cut them into pieces so everyone can eat a small piece of banana.”

‪“When the road between Douma and Wafideen refugee camp was opened, people rushed to buy all their needs because prices there were cheap compared to the prices in Douma. But the road was closed the following day and the prices in Douma returned to even higher than they were before,” said Abdullah, a volunteer paramedic from Douma.

‪“The regime has punished the people of Douma for joining the protests against it since the beginning of the revolution in 2011, preventing the city from accessing provisions. But the problem was exacerbated by the warlords, who profited from the revolution and its martyrs. They smuggled food through Barza-Harasta tunnel, storing it to be sold later for 10 times the price. For example, they would sell a 4,000 SYP box of ghee for 56,000 SYP.”

‪When asked about the warlords, Abdullah said angrily, “Everyone is responsible for this, or at least everyone knows about it. We are all exhausted because of this siege, and instead of using the tunnel to help alleviate their suffering, it has become a filthy way for some warlords to profit.”

‪As soon as he had finished work downtown, Ahmed rushed home with eyes full of joy, greeting an acquaintance or smiling back at someone he had recognized. As he walked, he kept on touching his pocket to feel a great sense of happiness. He had just bought a fresh green apple that cost him a day’s salary.

‪“I paid 350 SYP for this apple, it is like they had brought it from heaven,” he said, adding, “my mother likes apples, I thought I wanted to surprise her with a gift that could make her happy.”

‪Upon returning home, Ahmed saw his neighbor and approached him. A wealthy man prior to the war, the neighbor and his son were dressed in worn out clothes. Ahmed greeted them and sat on the sidewalk in front of their house.

‪He stroked the little boy’s hair while glancing at the father, who looked older than he should. Hesitantly, Ahmed felt for his pocket and took out the apple, cut it in half, and gave the other half to the boy.

‪The young boy stared at the apple for minutes. “He didn’t know what this was, and he thought it was a toy of some kind. This boy has never seen an apple before,” said Ahmed.