Together, God willing, we will support the revolution, and fight against oppression with both knowledge and weapons 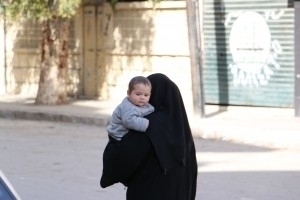 The day I enrolled at university was a dream come true. It was the beginning of a new phase of my life, and the prospect of meeting new friends and having new experiences excited me.

When my first term at the faculty of education started in October 2013, I spent most of my time there. As the days went by, I learned many new things, but unfortunately not all my experiences were positive. Little by little, I began to realise how naïve my perception of life had been.

The tutors would help certain students cheat so that they could pass their exams. These were students who had set up what were called “social committees” but which in reality were shabeeha, or pro-regime forces. They used their status to make the lecturers and administrators pliable. They never attended classes, yet they always ended up with top marks in their exams.

As for the rest of us students, they bullied us and stole the academic results for which we worked so hard. All we could do was look on in silence, unable to rebel for fear of the consequences.

By the end of the first term, I had received a number of marriage proposals, but most of my suitors lived in liberated parts of the countryside around Idleb. I was living and studying in the city, under government control, and I had no intention of abandoning my studies.

I think many of them approached me because my family was openly opposed to the government, and they wanted to marry a woman who would support them in their quest for freedom.

The first of my suitors was a rebel fighter. The second was a journalist who reported on life in the liberated areas. I declined both their proposals, because I was afraid the commitment would affect my studies.

I hope they managed to find young women who made them happy and supported them. Both of them had good manners and were well-educated, and it is very hard to find those qualities in a man these days, especially when those in charge of our city are all corrupt shabeeha.

I rebuked myself on many occasions for rejecting them. I hated the government, which had detained my brother and displaced my relatives, and in the meantime I was offering nothing for the revolution.

One day, the family of another young man approached me and asked for my hand in marriage. He too lived in the Idleb countryside, working for a relief organization. He had been studying to be a vet, but during his third year at university, he began participating in anti-government demonstrations and became a wanted man.

I was a little hesitant to begin with, but I decided nevertheless to go out to the countryside and meet him.

My family and I made the journey to see him in January 2014. As I looked around, I was amazed to see anti-government slogans and verses from the Koran written openly in the streets. Even the air felt cleaner than in the city.

When I talked to my suitor, I found him an educated, open-minded young man. He told me we should support each other and be prepared to make some sacrifices for the sake of our revolution.

I accepted his marriage proposal and made up my mind to move to the countryside and do everything I could to overcome the obstacles and continue my studies.

Together, God willing, we will support the revolution, and fight against oppression with both knowledge and weapons.