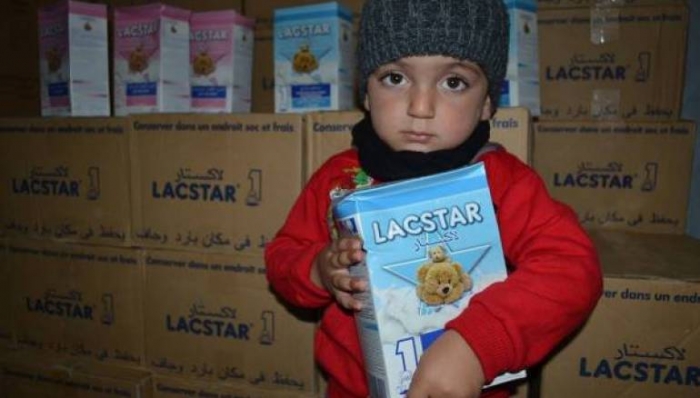 Ritaj Shmier, an eight-month-old Syrian girl, has suffered from malabsorption syndrome since birth. She needs a special formula of milk, which her family cannot afford as the price of one tin is more than 2,450 Syrian pounds ($11 US dollars). As such, Ritaj joins a group of 1,650 children in al-Rastan, Homs province, who are deprived of basic food as a result of the inhumane siege imposed on the city.

The Mother and Child Care Office is one of the relief agencies which works to save the children of Rastan. The agency tries to provide the essential needs of children in the city that was one of the first Syrian areas to join the revolution.

Maha Ayoub, the organization’s director, told Iqtissad that there is almost nothing available in Rastan under the four-year siege as it has become too hard for people to provide the most basic requirements for living, including milk for their children. “Because of that, me and my friends thought of establishing the Mother and Child Care Office to help in securing free milk for children of Rasran and help them to stay alive during this critical time of their lives,” she said.

“However, recently it has become difficult for the office to provide this essential food for feeding the children and for their growth or even to afford financial support to buy it,” Ayoub added.

Ayoub pointed out that the office had launched several appeals across social media and other networks, including print and audio-visual media, in order to alert the world to the difficulties of providing milk for the children, as the community lacks any specific mechanism to provide milk as a result of the siege. The number of children and infants who registered with the office in Rastan city alone has reached 1,650 (numbers in the countryside are similar).

In regards to alternatives for milk powder and what mothers can do to provide milk to their infants if they are unable to breastfeed (which sometimes becomes difficult because women cannot produce breast milk because of lack of nutrients and stress), Ayoub mentioned that many women were forced to give their 6-month-old children animals’ milk, even though it is unsuitable, not clean and sometimes contaminated.

Ayoub also noted other difficulties in providing for the needs of children, including nappies, clean water, vaccines and means of heating, especially in the winter.

The Mother and Child Care Office relies on donors and charities, including the Wafa Association and the Turkish Committee for Relief of Homs. There are no other relief organizations or institutions which specialize in providing milk for babies, according to the Ayoub.

Ayoub directed her words to organizations concerned in children affairs, especially UNICEF saying: “Our children are facing disability and death every moment because of the bombings, hunger and poverty, and you are not interested in them, despite our repeated calls.”