Faced with severe economic strain, Syrians are finding it relatively impossible to survive on what they have access to. How can families overcome these conditions? Moreover, how could a Syrian family provide for its needs inside Syria at such an unprecedented cost? 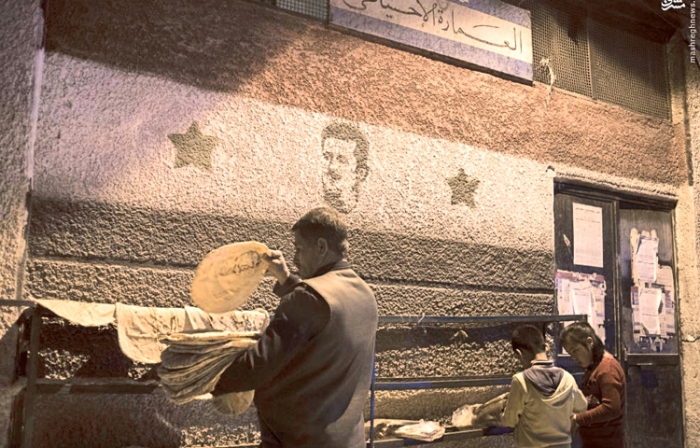 Every day, there are news reports on the huge numbers of those who die from the violence of Bashar Assad’s forces in Syria, and perhaps it is because of this that many have come to ignore this horrible reality.

High Prices Are Only in Syria

Jamal al-Satel, head of Syria's Consumer Protection Society, told Al-Watan last November that the purchasing power of individuals is 80 percent less than it was in 2011, and that a family of four members needs a minimum 75,000 Syrian pounds ($340 USD) per month to survive, not including rent.

The Central Department of Statistics confirmed Satel’s remarks, noting that the consumer prices index reached about 430 percent in May 2015, indicating it had achieved 39.7 percent annual inflation from May 2014.

The increased rates of the consumer prices index reached approximately 178 percent between 2011 and the beginning of 2014, according to the Syrian Center of Policy Research, which shows the collapse was larger and faster over the last year, corresponding with United Nations Economic and Social Commission for Western Asia reports (the value of the Syrian currency has dropped about 240 percent since 2011).

Inflation and high consumer prices of this magnitude, it appears, are only in Syria. The Food and Agriculture Organization (FAO) published an index of food prices at the end of 2015, showing that the global price of meat has dropped 23 percent, the price of grains and oil have dropped 16 percent, the price of milk products has dropped 15 percent, and the price of sugar dropped 10 percent. The FAO reported that this decrease is the result of the “dollar’s strength and the availability of the food supplies.”

Faced with this dire economic strain, Syrians are finding it relatively impossible to survive on what they have. How can they circumvent these conditions? Moreover, how could a Syrian family provide its needs inside Syria at such a cost?

Abu Taher, a man from Homs, has worked as a furniture upholsterer since childhood in his father's shop, which he now owns. After 20 years of continuous work, and after the violence and the conflict in Homs escalated dramatically, his business stopped.

He thought it would only be temporary, but has instead lasted for three years, and he has spent all of his savings to survive. "At the beginning of 2015 I felt it was impossible to keep on living like this. My shop was closed and I have stayed home with my wife and kids. They have many needs, so I had to do something to help improving our lives," he said.

Abu Taher decided to go back to work, but he needed to offset his losses to be able to start again. "I decided to lease out my shop. Some of the merchants had gone back to the market, and some of them needed a place to start their work. Thankfully, I was able to lease it out immediately."

But this wasn't enough, as he needed a place to start his business again. "My house is on the ground floor beside my shop. I took a part of the garden and a part of the house, with a front on the main road, and split it into two shops. I leased out one and used the other," he explained.

“My income is not like the old days, compared to the value of the dollar, but we are doing ok, thank God. We can't sit around doing nothing and waiting for things to change, so this was the best thing to do."

His wife, Om Yaman, explained: "God only knows what we have gone through. We learned that our house in Ghouta was shelled two years ago, and our car is still trapped there. We left there with nothing but our clothes, so I had to sell all my jewelry to help us survive."

"We moved to the countryside because the rents here are lower than Damascus. We pay 15,000 Syrian pounds as rent for two small rooms here. The house is not painted and the floor is not covered with tiles, yet it is cheaper than any other area. The rent we pay here won't even get us a square meter inside Damascus," she added.

Abu Yaman began to look for work, so he used his wife's cooking experience and started working at a restaurant that makes beans and falafel, but his salary was barely enough to pay the rent.

One day, Om Yaman decided to start planting seeds in the land opposite to her house. She asked the owner for permission, and started planting seasonal vegetables. "I had never done this before, but I learned because we needed this. I planted tomatoes, peppers, eggplant, parsley and onions. I didn’t plant enough of the kinds we needed, but it was great support for our expenses," she said.

She said her family has saved more than they had expected, explaining: "One kilo of tomatoes costs 150 Syrian pounds, cucumbers and eggplant cost more than 200, onions cost more than 100 per kilo, and about 500 for green beans. How else can we survive with our five kids with such prices?”

The Dollar as a Last Guarantor

Abu Mohamed, a young man from Hama, graduated from Damascus University at the same time of his father's death at the beginning of the revolution.

"My life changed suddenly and unexpectedly,” he said. “My father died two months after he was diagnosed with cancer, and I found myself responsible for my whole family. I don't have any brothers to help me, and I became responsible for a family that consists of four sisters and a mother, in a time of financial collapse."

Abu Mohamed was a public servant, but he claims his salary wasn't even adequate to buy enough bread. He started to think of a new way to bring in money and to provide a better life for his family. "In the middle of 2014, I discussed this problem with my family to try and find a solution," he said.

He suggested that the women in his family sell their gold and convert the money to dollars. "My mother and sisters did not mind doing that, of course, but the price we got for the gold was not as high as I expected, due to the collapse of the Syrian currency and the fact that their jewelry was old. I could barely get $3,000. But yet, I think it is much better than leaving the jewelry hidden inside boxes."

Abu Mohamed invested the money in a project run by his friend in Turkey. "I did not take the interest right away, instead I added it to the original sum to get more interest. Thank God, now I know that this was the right thing to do. We managed to at least sustain our purchasing power by converting what we had to dollars."

Syrians are trying hard to circumvent their living conditions, during a war they had to pay for with their lives and their precious assets. The individuals we talked to here were able to find solutions, but this does not reflect the hundreds of thousands of others who could not find ways to do the same.