"They took my three brothers right in front of us in a night raid. This was the toughest night ever. Two days later, two of my brothers were released while the third remained arrested, we haven't heard anything about him since" 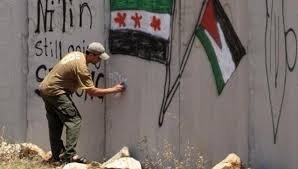 When the protests started in Syria, the Palestinians watched on silently. Their silence soon turned into a rage as they watched the regime shell and besiege all places which stood in opposition to its tyranny, even Palestinian refugee camps. It was as if they were thrown back in time over six decades, faced again with displacement and the death boats toward Europe, this time with the Syrians.

"Almost an hour after the journey had started, the inflatable boat engine stopped working. The women and children started crying and the men started screaming ‘Allahu Akbar’ (God is great)," said 22-year-old Abeer.

She spoke about the journey of her escape with her family two years after the beginning of the bloody war in Syria. She continued, "My three brothers were arrested in Sweida, two of them were released and the third is still arrested. We decided to flee Syria toward Turkey."

The Palestinian family – including a father, a mother, two girls and three young men, one of them married with three little girls – all had Syrian ID cards with ‘Douma’ written on them. Douma was their place of birth, which was more than enough to get them, especially the men, harassed at the numerous regime checkpoints that separated Damascus from its countryside.

"We were all harassed by the regime checkpoints, especially my brothers, after the people of Douma revolted. We kept moving between Douma and Yarmouk [refugee] camp where my grandfather lived, for over a year. But the siege imposed by the regime forces around Douma prevented us from leaving the city which was heavily shelled," said Abeer.

"However, when the regime opened the road for a few days, my father asked us all to leave Douma and leave him there all alone," she added.

"When we left Douma, we went to Yarmouk camp and stayed at my grandfather's for a while, then my brother rented a house inside the camp where we stayed for a few months…" Abeer paused as if she was remembering something and then continued, "…on a Friday that I recall very well, a large demonstration roamed the streets of the camp, demanding to lift the siege around the besieged cities and towns. I was able to see the protesters from our house window, then suddenly, we heard heavy fire and three young men fell right in front of our house, they were shot in their heads. My brother went out to try and help them, and we all started screaming and yelling: ‘They killed them’."

Three months later, the family moved to Sweida city after Yarmouk camp was deemed an unsafe place to live in, Abeer said. "My brothers found jobs in the construction field, and we felt a little bit safer despite the harassment at the checkpoints my brothers had to face, just for being displaced from Douma."

However, about a month and a half later, a night raid surprised the family. More than 10 men wearing military uniforms and carrying guns entered the house. "They took my three brothers right in front of us. This was the toughest night ever. We sat around my mother who was crying for her children," Abeer said, taking a moment to breath, "two days later, two of my brothers were released while the third remained arrested and we haven't heard anything about him since."

"My brothers did not talk to us after being released, until the day their friend, who had paid a large sum of money to find out anything about my third brother, told them that he was taken to Damascus. I remember very well that when my elder brother heard this, he looked at my mother's eyes that were still filled with tears and said: ‘We will escape to Turkey’.”

The family travelled toward Aleppo, and then crossed the border toward Turkey, passing through Al-Rrayhania until they reached the Turkish coastal city of Izmir. "At the beginning we faced a terrible situation. My mother's bag, which contained almost everything we had was stolen, but we were able to manage things. My brothers worked as tailors, and we rented a small house for about a year, but the expensive life there and having three little children with us forced my brother to think about emigrating to Europe," she said.

“At the beginning, my mother refused to go. She wanted us to travel alone while she returned to Syria to ask about her detained son. However, my brother was able to convince her in the end. He said: ‘We will not go without you’.”

The family decided to take an inflatable boat toward Greece, a horrible and suicidal journey. "We gathered in Basmane Square just like the smuggler had told us. A few taxis picked us up and took us towards a remote mountainous area. We stayed there for about nine hours waiting for the car that will take us to the boat. A large car came and the people started scrambling to get into it. I was able to get into the car with my nieces, but my mother couldn't because the car was filled with people".

Abeer continued, "Among the large number of people in the car, we lost the bag were we kept our life jackets in. We got out of the car and my brother started yelling, but the smuggler told him there would be another car. Another car came indeed and took us to the boat".

"About an hour after the journey had started, the boat engine stopped working. The women and children started crying and the men started screaming ‘Allahu Akbar’. Some of us tried calling the coast guards, and I looked at the children and hugged them. A while later, a man was able to start the engine and the inflatable boat moved again. We arrived in Greece about four hours later," said Abeer.

The family eventually arrived in Germany, and their mother, exhausted from the journey, was hospitalized. "I am glad we made it to Germany, but I am so sad for my mother. In addition to her illness, she cries a lot every time she remembers my detained brother. She keeps saying ‘Take everything, just let me see my boy’."