The Russian influence has resulted in preventing the “Syrian Democratic Forces” from advancing toward al-Shadadi, an oil-rich region, and turning to fight the Islamic State along the fronts of the Aleppo countryside. 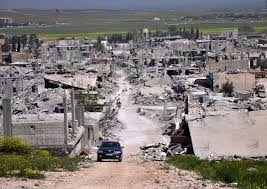 The United States and Russia are competing with each other to establish a military presence in Hassakeh province, while Iran had withdrawn from the city after Hezbollah withdrew from Qamishli in 2015.

The situation is complex: the United States supports the Democratic Union party (PYD), while Russia coordinates with the Syrian regime as well as the PYD. This complexity impacts Syrians’ lives and makes them more difficult. It also extends the regime’s life, influencing the situation in Hassakeh city, which is rich in oil.

On the one hand, the United States is attempting to establish an airbase near Rmilan oil field, adjacent to Iraq, while Russia sends its soldiers to the city through Qamishli Airport. This is making the area an international battlefield where countries use Syrian territory to compete with one another.

The Russian influence has resulted in preventing the “Syrian Democratic Forces” from advancing toward al-Shadadi, an oil-rich region, and turning to fight the Islamic State along the fronts of the Aleppo countryside.

Activist Abo Kassem al-Jazrawi confirmed that planes carrying weaponry have begun landing at the rural airport situated between Alyarobiyeh and Rmilan, northeast of Hassakeh. He has pictures of planes landing at the site.

The activist confirmed that a military cargo plane and two Abatshi planes had landed in the airport and unloaded arms to the Democratic Union Party and other militias under its control, in order to fight ISIS under the supervision of eight American officers. He noted that operations like this had happened many times.

Another activist from the Shammar tribe, who spoke on condition on anonymity, explained that the American forces has seized 200 acres around the rural airport from residents without any compensation.

The activist noted that last Monday, seven unfamiliar cars headed toward the airport coming from Malikeyah under heavy guard. Later it was revealed that they were carrying prominent figures from the PYD and American officers who were returning from a meeting in Malikeyah to discuss ways to support the new military base in the area.

An officer in the Kurdish self-administration did not comment on the report that an American military base had been established in the area, which contains the Rmilan oil fields. The supposed airbase is only 15 km away from the oil pumping station at Tal Adas, where oil flows from more than 1,700 wells collect before being pumped to Homs’ refinery and Tartous seaport. The regime had left this station to the PYD in January 2013, and then it was converted to a military zone.

Activist Mahmood al-Ahmed, from Qamishli, reported that 100 Russian soldiers, among them 10 officers, had arrived at Qamishli airport via a Syrian military airplane. They were later transported later to the Brigade 154 army base under heavy guard by PYD and Syrian forces.

Al-Ahmed noted that Russian advisors had visited Qamishli in the last week to reach an agreement about deploying the ground forces in the area. Meetings were held with PYD and Syrian regime militia, and an agreement was made to deploy them in regime-controlled areas.

The meeting was held between Russian officers and commanders of the Syrian Democratic Forces (SDF), an ally of the United States, in December 2015. At the same time, the SDF’s plans changed from targeting the southern countryside to retake oil wells from ISIS to targeting ISIS in the Aleppo countryside.

In October 2015, the United State formed the SDF and supported the new alliance with arms to fight ISIS. This allowed the Democratic Union Party to take the al-Hol area in November 2015.