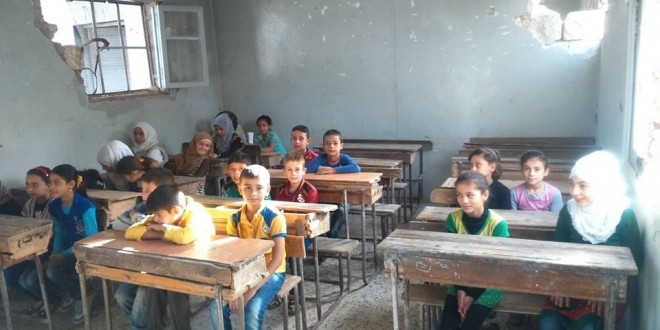 By the time Idleb’s free villages and cities were liberated in mid-2015, they had been reduced to ruins by the shelling and fighting they witnessed as battlefronts for more than three years.

The village of Kafer Shalaya, west of Ariha, made a civilized example for the liberated towns through the cooperation of its people in repairing the roads, renovating the only school, rehabilitating the classrooms, and building a health center to serve residents of the village, who number 4,000 along with some displaced people, in an attempt to restore life to their village, which was liberated from the regime’s grip in June 2015.

Faisal Abu Sateef, head of the local council in Kafer Shalaya, told Tamaddon: “After the liberation, the village was lacking the most basic elements of life. The roads in the village were closed because they had been turned into barricades from the regime forces, and had been mined. Because of the damage inflicted on most of the houses — 90 percent of the houses had been damaged by bombardment with rockets, barrel bombs and mortars.”

“The first thing we did was form a Shura (consultative) council including community elders, and then we formed a volunteer team of young men to clear the debris and repair the roads, and a team to repair the school, which was also hit by shelling and had most of its doors and windows shattered by barrel bombs,” he said. “They worked to renovate it and replace the glass with nylon, and restore what was left of the classrooms. The young men of the village finished the work a month after the liberation, making the school ready to work.”

The head of the school, Amer Murad, talked about the educational staff, saying: “Many of the village’s teachers emigrated to Europe or are still in the villages where they were displaced, and so we chose a number of young men and women graduates from the village and university students to take charge of educating the village children voluntarily. The school started work as soon as the classrooms were ready and the damaged sections we were able to repair were renovated.”

Kafer Shalaya is located on the Ariha-Lattakia highway. Considering its strategic position on a major road, and the repeated car accidents and injuries on the international highway, the people of the village tried to set up a health center in charge of serving injured people and providing treatment to village residents free of charge. The center is overseen by a specialist nurse, a midwife, and a qualified nurse with 12 hour rotations.

“Because of the village’s position on the international highway, it is very important,” said Abdel Rahman Abu Mohammed, the center’s manager. “Most of the health centers are in the villages and towns more than 10 kilometers away from the Ariha-Lattakia highway. So we worked on preparing a health center including first aid equipment and some medicine from the health directorate, and prepared the center with two rooms for treatment. But we do suffer from a lack of equipment and medical supplies, especially for childbirth and injuries resulting from shelling, because there is no X-ray or surgical equipment.”

Abu Mohammed added: “Our work is voluntary, and there is no sponsor, but we are continuing to provide services to our people who need it and especially in health and awareness, with the spread of diseases and epidemics from Syria’s medical history which have reappeared once again.”