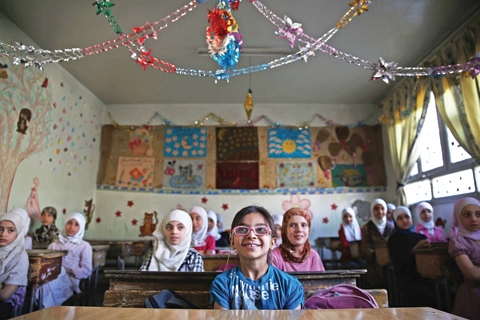 The five-year crisis has caused many of Syria’s traditional routines and customs to change. Family members would often compliment one another on achievements by visits and the exchanging of gifts. But earlier this week, Syrians instead took to social media to congratulate those students who successfully passed their final exams.

Due to a lack of communication means, Facebook has become a convenient alternative for those who have lost contact with each other for several years, and the exam results gave good reason for family members who hadn't spoken in years to interact.

Parents posted students’ results on Facebook as a way to communicate with relatives who reside in areas under the control of armed militias, with friends and family living in safe and ‘hot’ zones commenting on the posts to congratulate them.

Mohammad, who congratulated his sister on his Facebook account, said: "Because of the current situation I haven't seen my parents for three years, but I am extremely happy that my sister passed her final exam."

Abu Samir, who lives in an area under the control of Nusra Front in Idleb, congratulated his niece saying: "I wish we could reunite soon my dear niece. Congratulations for passing your final exam." While German resident Khaled congratulated his cousin who lives in a hot zone, wishing for a family reunion and praying for the war to end soon.

The father of one student posted on his page that his happiness will not be complete until he is reunited with his mother and brothers whom he had not seen for two years. He also hoped that his brothers who live in a refugee camp in a neighboring country could see his son's results.