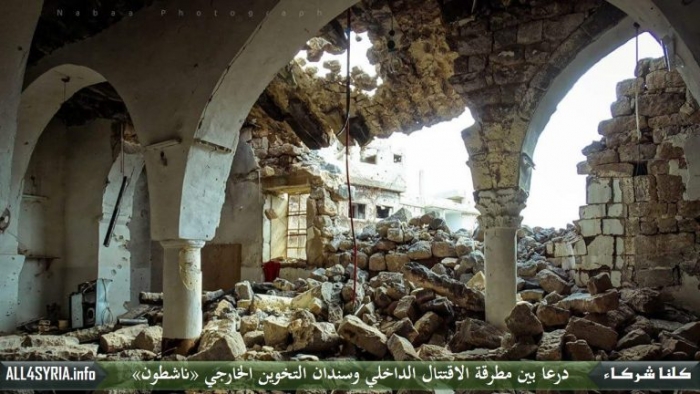 Over the past few weeks the southern Daraa province has witnessed several cases of internal fighting and an unprecedented campaign of accusations against the province’s revolutionaries, reaching the extent of treason in many instances.

In an attempt to avoid this fighting, a local court decided to confiscate all weapons used in these types of disputes, according to a statement by the House of Justice in Houran on Tuesday, in which it said that it held the leadership of the faction legally and judicially responsible for any harm occurring because of the use of weapons in the disputes and conflicts.

The activist Abdel Rahman al-Zouabi told All4Syria that the revolutionaries of the province had fallen between the hammer of internal fighting and the anvil of external treachery. Since the start of the month of June hardly a day has passed without internal fighting, in most cases between a group of civilians and quickly spreading to revolutionary formations.

He noted that the number of casualties resulting from the internal fighting since the start of the month had reached about 15 dead, and that the main reason behind the campaign of accusations and the internal fighting in the province was primarily the receding of the fronts with the regime forces, in addition to the massive spread of weapons among the community, especially civilians, so that any small dispute could easily escalate into armed clashes.

Zouabi added that those responsible for the campaign of assassinations during the last year, which has killed more than 160 activists and commanders across the province, are also responsible for inciting the internal disputes in the province to achieve their interests.

For his part, the Free Syrian Army leader Khalid al-Hariri told All4Syria that the solution lies in activating the role of the House of Justice court and working on controlling the flow of weapons and issuing punishments to all those who carry arms or open fire in any area of the city, in addition to reigniting the fronts with the regime forces as tens of thousands of fighters are now without work.

He added that the court had played a positive role during the previous few days, whereby it contributed to stopping the bloodshed and containing a number of problems in the province, including a dispute which occurred between the people of the eastern village of Maleeha in the eastern Daraa countryside and a group from the Alwiyat al-Amri formation, which killed four people from the two sides during the last week.

He added that the court also had a large role in containing the two sides of the conflict and transferring the dispute to court, in addition to its positive role in the case of one of the leaders of Liwa Tawhid al-Junub, Saeed al-Masalama, being killed at the hands of a group loyal to the FSA-linked Yarmouk Army on the border with Jordan, after fire was exchanged between the two sides at the start of the week.

A member of the Syrian Media Organization Amar al-Zayed told All4Syria that there were parties working on planting discord and division between the revolutionaries of the province, coinciding with the campaign carried out externally, and so after any dispute, even if it is minor, a group of those affiliated with the revolution will kindle regional and tribal strife in order to inflame the conflict and spill more blood, because they know well that bloodshed is a red line among the residents.