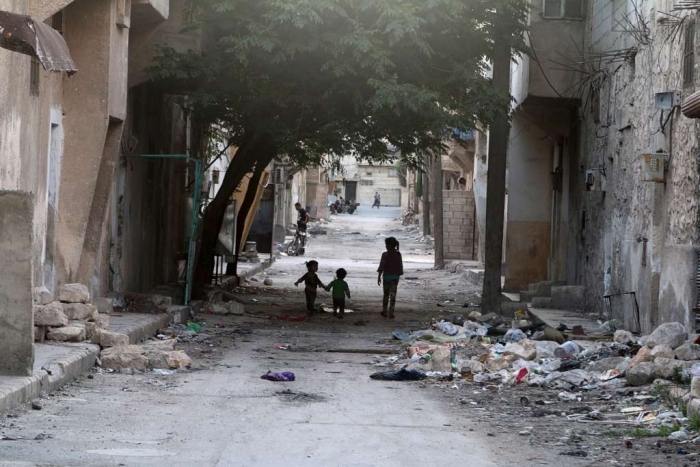 Syrian regime forces effectively cut the only way into rebel-held areas of Aleppo on Thursday as they advanced to within firing range of the road, rebels said, despite the regime’s announcement of a ceasefire for the Eid al-Fitr holiday.

The advance near the Castello Road brought the Syrian regime closer to its long-standing objective of encircling rebel-held areas of Aleppo. The rebels however said a fight was underway to take back lost positions and resecure the road.

The advance came during a 72-hour ceasefire announced by the Syrian regime on Wednesday.

Aleppo, Syria’s largest city before the civil war with a population of more than two million people, has been divided for years into rebel and regime sectors. The Aleppo area has been a major theatre in the conflict.

Heavy aerial and artillery bombardment had at times made the Castello Road impassable. But Thursday’s advance brings regime forces the closest so far to the road, making it even easier to hit and effectively cutting off the opposition-held sector of the city near the Turkish border.

“Currently nobody can get in or out of Aleppo,” Zakaria Malahifji of the Aleppo-based rebel group Fastaqim told Reuters.

The Syrian Observatory for Human Rights said the advance by pro-regime forces in the al-Malah Farms area had brought them to within one kilometer of the road.

“If regime forces can hold their positions there and fight back the counter-offensive, then the opposition neighborhoods will be completely besieged,” Observatory head Rami Abdel Rahman said.

A second rebel official with fighters in the area said: “All the factions sent reinforcements and are trying to take back the positions taken by the regime, but the situation is very bad. There was heavy regime air cover in the night.”

The U.N. Syria envoy, Staffan de Mistura, noted on Thursday “initial reports of potential violations” but urged all parties to abide by the truce.

The Observatory estimates that between 250,000 and 300,000 people live in opposition-held parts of Aleppo.

Syria’s civil war, now in its sixth year, has killed at least 250,000 people, displaced more than 6.6 million inside the country and forced another 4.8 million to flee, many seeking refuge in Europe.