The manufacturing of Assad propaganda assumes permanence in power, despite a revolution in the country for five years, and on that basis the media has expanded from the father to the eldest son, who it seems will take over the presidency 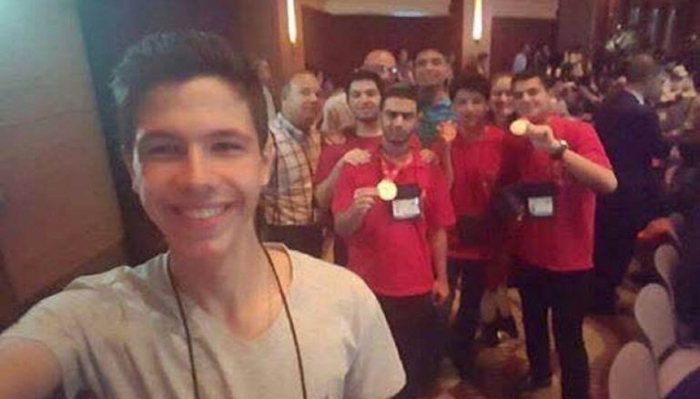 “The next president.” This was the description given by regime loyalists to new pictures of Hafez, the oldest son of Syrian President Bashar al-Assad, as he participated alongside a Syrian delegation in an international Science Olympiad for mathematics in Hong Kong.

This label carries a large amount of provocation. Above all, it is far from any democratic concept which loyalists pay lip service to and which is demanded by the opposition. Descriptions of this type also seem grander than the boy himself, who may not be aware of the political game around him to groom him to succeed his father, and subsequently turn him into an enemy for many Syrians on the basis of his father’s crimes, which is apparent in the comments of opposition activists towards the photo.

Given that photos of the children of any president in the world are not newswothy in themselves, the situation in Syria is certainly radically different, where pictures of the “ruling family” are published on the Facebook and Instagram pages of the “President of the Arab Republic of Syria” before being republished on many loyalist pages on social media, and in regime loyalist media pages inside Syria, and their regional allies.

The manufacturing of Assad propaganda assumes permanence in power, despite a revolution in the country for five years, and on that basis the media has expanded from the father to the eldest son, who it seems will take over the presidency when old enough! This is just as the situation was in the era of Syria’s late president, Hafez al-Assad, when images and news of his eldest son Bassel were published in official media up until his death, and after that moved to the second son, Bashar, who had been absent from the scene entirely.

In light of that, it seems the publicity accompanying the young Hafez is similar to some extent to the publicity around his father in its focus on his scientific achievements and his school performance, and his keenness on the value of education, just as the local media had drawn a picture of Bashar before he reached the presidency as an open-minded doctor who would lead the country toward greater progress after his return from the West.

The presidential page on Facebook said on Friday that the “young Hafez” did not win any medals in the Olympiad, except a certificate of appreciation, while the Syrian team, made up of 20 participants, won three bronze medals, bringing the Syrian team’s global ranking to 48th place; up from 109th in 2009.

Hafez placed seventh in the mathematics competition inside the Syrian Science Olympiad at the start of the year. His placing was unique as it was the first time a member of the “ruling family” did not win the competition since the arrival of his grandfather to power in 1970, sparking conflict on social media between loyalists and opposition, the first event in which the “young Hafez” was the subject of public scrutiny.