Abou Mohamed's family, like 4,000 other families, must endure extremely difficult conditions after being forced from their homes in the Marj area of Damascus' countryside by regime 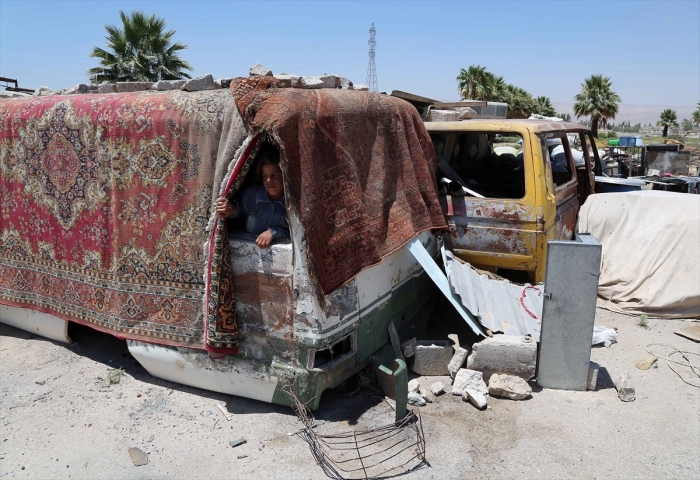 The summer journey for those Syrian refugees fleeing death to the outdoors continues this season under fragile tents that offer no protection from the scorching heat nor from the lack of food and medicine.

The family of Abou Mohamed Osman, who were displaced from four villages in the Marj area of Damascus’ eastern suburbs following an aerial campaign by regime warplanes, recently landed in the village of Hawash in the Douma countryside, after the warplanes began a large attack on Marj midway through last month.

After covering them with pieces of worn rug, Abou Mohamed has turned old car wreckages covered in dust and rust into a shelter for his family in the days following their fifth displacement, which began three years ago as they fled the fires of war.

This situation of this family — composed of a father, a mother, and five children — resembles that of around 4,000 families displaced recently from the towns of Qasmiyeh, Meidaa and Bahariyeh in the Marj area, after assaults targeted the villages last month. Many of them have been unable to find shelter in Douma, and so have been forced to live in tents on empty land, in cars or in gutted houses.

These families endure extremely difficult conditions. The food they obtain is from charity kitchens in the city, and they use nearby wells to obtain water which is mostly unsuitable for drinking.

Umm Mohamed, the wife, spoke about the family’s journey when they left Marj and spent three days searching for shelter to no avail, until they gathered burnt-out and broken-down cars and covered them with fabric and carpets, which shield them from the summer heat and winter cold.

“Life is unbearable with the high heat,” she says, “Every day I pour water over my children until I can ease the burden of the heat on them.”

Umm Mohamed, who is pregnant with twins, called on humanitarian groups to help her, and secure space for them to live that would protect them from the heat and secure the minimum requirements of life.

About 11,000 families lived in the Marj area before the start of the revolution in 2011. With the beginning of military operations in the towns, about 85 percent of residents were displaced during the past five years, according to the opposition’s unified relief office in Eastern Ghouta.