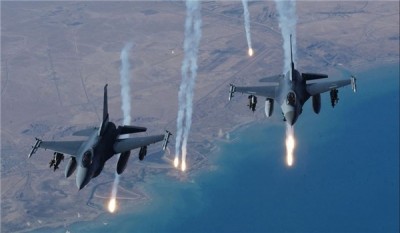 Military sources in Deir-ez-Zor confirmed to Al-Modon that the Al-Tharda Mountain area, which is considered a military base for the regime, was one of the largest arms storage areas in the east of Syria, containing sophisticated weapons and chemical materials before it was targeted by the US-led coalition on September 18.

The targeting of this area and the death of 60 regime soldiers in addition to the news of the death of seven members of the Russian special forces angered Moscow, causing an escalation as the Russian aircrafts bombed a relief convoy in Aleppo, resulting in a collapse of the US-Russian ceasefire agreement.

The attack preceded the release of results from an international investigation for chemical weapons use.

Some commentators claim that Russia’s heavy response to the bombing was because it had forces facilitating a deal with the Islamic State to provide the group with sophisticated chemical weapons.

ISIS was able to temporarily capture the military sites after they were bombed. The US claimed they were targeting ISIS sites after receiving accurate intelligence for the past two months. The coalition halted the air raids after Moscow confirmed the sites were controlled by Assad regime forces. Washington has apologized for the strikes, claiming that the coalition targeted the sites by mistake.

Dissident military sources told Al-Modon that information confirms that the Al-Tharda Mountain area had been a storage area for sophisticated weapons and chemical materials including mustard gas since before the Syrian revolution began. Regime forces have continued to fortify the site, digging storage areas inside the mountain close to Deir-ez-Zor city. Sources told Al-Modon that the way this site was fortified was the reason why the Free Syria Army was unable to reach it before.

A source pointed out that the coalition’s bombing of the three sites was to stop a Russian-Iranian plan to hand chemical weapons to ISIS. According to the source, the plan was to have ISIS take control over the mountain, transport the weapons and then retreat.

The source also confirmed that ISIS was planning to move the weapons south in order to attack Daraa and Suweida, causing the coalition to launch a pre-emptive strike to prevent the group from obtaining the chemical weapons. Sources confirmed that the coalition’s intelligence was accurate, which was the result of an intelligence collaboration with infiltrators inside the regime forces.