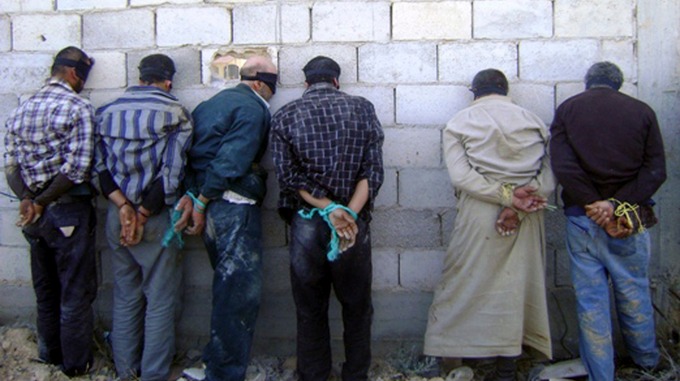 A campaign was held in the German capital Berlin last Saturday, October 15, to raise awareness of the issue of detainees and the forcibly disappeared by the Assad regime and the Islamic State group.

The following is a statement issued by the campaign:

“With every new sun rise, the tragedy of hundreds of thousands of Syrian families rises and grows. There is almost no Syrian family that doesn't have a detained, a missing, or a kidnapped person. Thousands of these people have died under terrible torture in detentions. In fact, just now while you are reading these words, there are women, men, and even children dying right now because of the brutal torture in the Assad regime's detention centers.

While dozens of international human rights organizations have documented these crimes with evidence and testimony, and while the International Independent Commission of Inquiry on the Syrian Arab Republic described what is happening in the Assad regime's detention centers as a crime of genocide, silence and helplessness are the only achievement of the international community and the United Nations in this matter.

As a result, millions of Syrians have lost faith in human values, and the Universal Declaration of Human Rights, which could lead us only to deep depression and extremism. For this, we are calling today to urgently separate the file of detention in Syria from the political files in negotiation and political bargaining, and deal with it as a moral and urgent humanitarian issue that is independent of itself. For this we suggest the following:

1. To stop the implementation of all death sentences since 2011 that are based on the conflict in Syria and taken by field courts and the Court of Terrorism cases, as well as Islamic courts and other courts or tribunals.

2. To stop all forms of torture and inhuman treatment against all the detainees and prisoners and ensure their safety by all sides.

3. To allow the International Committee of the Red Cross, and Red Crescent, and the observers sent by the UN to visit prisons and detention centers by all parties.

4. To release all children, women, and prisoners of conscience and victims of arbitrary detention by all parties immediately without any limitation or qualification, and uncover the fate of all detainees.

There will be no sustainable peace in Syria unless the issue of detainees is solved with a just solution. To bet on time and the forgetfulness of our people is nothing but an unethical bet and a failed bet.

Our detained friends and families, our life without you is nothing but a big prison.”