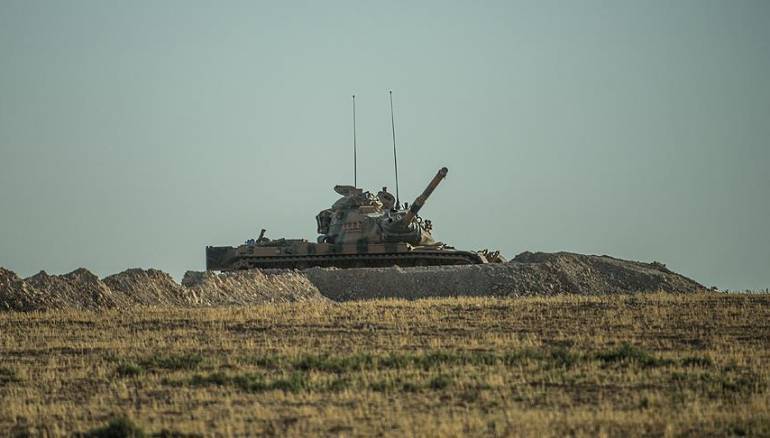 A new Turkish military incursion 500 meters into the area of Aqrabat in Idleb’s northern countryside on Wednesday evening enraged local residents and activists who took to social media to express their anger.

A military source revealed to Zaman al-Wasl that the incursion was undertaken to establish a new corridor for Free Syrian Army fighters travelling between Idleb and Aleppo’s northern countryside. The incursion is part of the Euphrates Shield operation supported by the Turkish government in the fight against the Islamic State group in Aleppo’s northeastern countryside.

The source added, “the aim of the planned new passage is to keep the Free Syrian Army fighters away from Atmeh crossing where many camps are dispersed in that area, and so they avoid civilian casualties and monitor explosions.”

Over 35 people were killed, most of them fighters in the Syrian resistance, among them the High Judiciary Council President in Aleppo Khaled al-Sayed and the Deputy General Mohamad Faraj in an explosion executed by ISIS militants earlier in October.

The commander, who preferred to not disclose his name, clarified that, “the Turkish army did not inform the Free Syrian Army factions before it entered Syrian territory,” and regarding the factions’ inquiries about the incursion he added, “we knew the Turkish army entered also as a premonition to the continued building of the cement wall which the Turkish state has spoken of a lot about in the media, and it has built a large part of it along the border strip in northern and western Aleppo.”

The Turkish army entered Syria to the border village of Aqrabat entered with military vehicles, workmen, and bulldozers to begin work to open the passage and flatten the agricultural land after cutting down several olive trees belonging to local villagers.

The bulldozers stopped working following residents’ objections about the trees being cut down. Abou Abdullah, one of the villagers of Aqrabat explained to Zaman al-Wasl, “an officer from the Turkish army told us that the works to open the road, uproot the olive trees, and flatten the land to build part of the cement wall on Syria territory will begin again with or without your consent.”

Aqrabat is situated next to the Atmeh area in the far north east of Idleb province. It is east of Bab al-Hawa, an official border crossing with Turkey and west of Afrin which is controlled by the Kurdish People’s Protection Units. It is also one of the areas that Syrians were using to enter Turkey illegally. Villagers explained that those crossing the border were shot at by the Turkish guards while they hid in the olive groves.

With Turkey continuing to build the cement wall on the other side of Idleb province, Syrians who are being bombed on a daily basis are faced with two options: remaining in their homes or moving to one of the border villages.