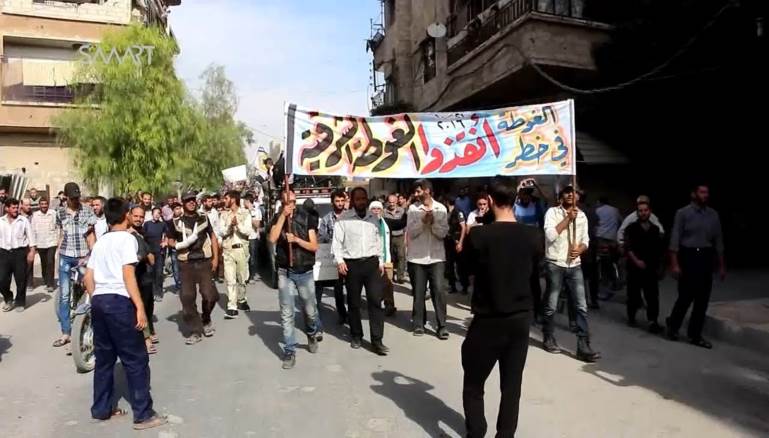 A protest broke out Sunday evening in the city of Saqba in the besieged eastern Ghouta, called for by activists and journalists opposed to the Army of Islam rebel group. The protesters rejected the return of the “security bureaus,” and demanded that those accused of assassinations be held to account, while calling for the release of the Army’s hostages, most importantly Al-Rahman Legion leader Abou Samer Kabou. Kabou was not known to have interfered in security or civilian affairs, and was spending most of his time on the front before he was kidnapped during a visit to Saqba more than 10 months ago.

The protest called on the Army to establish a military operations room gathering the rebel groups and “restore rights to those whose they were,” activate and supply the active fronts with quality weapons and remove the checkpoints dividing the towns of the Ghouta (despite already being removed a day before the protest by the Army and and Al-Rahman). The protesters’ demands to “restore rights” was a reference to the control of Al-Rahman and Jaish al-Fustat, which includes Jabhat Fatah al-Sham (formerly Nusra Front), separately, the storehouses and military workshops of the Army of Islam after internal fighting which has been waged for six months and has led to the end of the Army of Islam’s presence in most areas of the Ghouta.

The Friday protest, once it reached Zamlaka, began to accuse Al-Rahman of treachery and working for foreign powers, with protesters marching on the base of Al-Rahman leader, Lt. Abou al-Nasr Samir. His guards fired warning shots into the air to prevent the protesters from advancing to the base. Abou al-Nasr has previously been attacked by protests organized by the Salafi Hizb al-Tahrir movement, which calls for an “Islamic caliphate,” after the protesters broke into his base.

Al-Rahman published a statement in which it said shooting in the air in front of the protesters was unacceptable and vowed to hold to account those responsible, but it also stressed that the protesters changing course toward military bases was dangerous.

The Army of Islam protest — which did not announce its affiliation with any group — did not call for any of the demands which activists opposed to it consider the basis of the problem between the rebel groups in the Ghouta, most prominently accountability for the “assassination cell,” which is accused of belonging to the Army. Activists have also called for the release of hostages, and the abolition of the “security bureaus,” in which a number of people have been killed under torture, like Abi Alaa Talib from the Jobar district, who had been summoned by Branch 309 of the Army of Islam before his body was delivered to his family the following day.

One of the most important repercussions of the Army’s protest was the return of the checkpoints to their previous level and the withdrawal of Al-Rahman’s it sent to support the Army of Islam on the Tel Kurdi front, and the return of tensions to a level close to the start of fighting six months ago. This came after there had been talk about a deal between Al-Rahman and the Army, which had become so imminent that they had pulled out their checkpoints between areas under their control.

This collapse in the relations between the two parties comes after a round of negotiations carried out by the Army with a delegation close to the regime over the last few days. The negotiations were attended by civilian parties loyal to the Army, such as the local council in the city of Douma, which lost its independence after the Army gained solid control of Douma, and thereby over the Douma people’s council.

The negotiations with the regime did not bear fruit after it imposed conditions which the Army of Islam considered unfair to it and limited only to the areas under its control, and which would not have been imposed by the regime if the Army controlled the whole Ghouta.

The Army of Islam has not changed its security practices, most recently the aggression through attacks on the organizers of a feminist lecture around the political rights of women after they rejected the order from Army security officials to cancel it. The security officials told organizers they would have to bear the reaction of the people, before a group of young marched on the lecture hall, broke it up, looted its contents, and attacked two young men from among the conference organizers. The organizers accused them of trying to “spread immorality and desecrate our honor.”

Many Ghouta activists feared the possibility of the return of the Army’s control and the return of it restricting public activity and the relative intellectual diversity which has become a reality in the areas under Al-Rahman control.

It seems that this crisis between the military groups in the Ghouta, interlaced with security, civilian and criminal issues, is far from a solution and requires a change in behavior and the return of trust, to prevent the disintegration of military force and its activities on the fronts, leading to it falling into the hands of the regime despite the massive military force of the rebel groups, which control dozens of tanks, equipment and heavy weapons, and despite their warehouses being full.