Protests kicked off in the city of Idleb and Maha was among the first to take to the streets. Instead of a drum and travel gear she started carrying bottled water and sweets to hand out to protesters. Often I used to accompany her. I watched protesters in large numbers and I heard them chant peacefully. 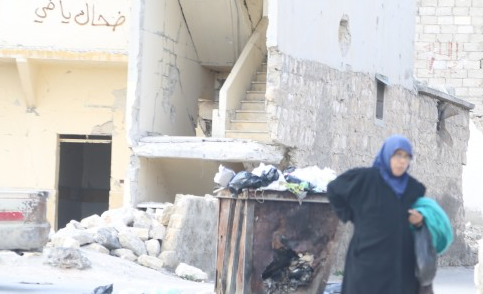 My sister Maha, the youngest in the family, is an English language teacher. Past the age of 30 she started losing hope in getting married. So, she decided to live happy and thus started dreaming about buying a car. Back then she could not afford it. By 2005 she had saved enough money. But, when friends and family told her that her salary would not be enough to cover the cost of fuel or repairs, and that the car would be a heavy financial burden, she took the advice and relinquished the idea of acquiring one. And by so doing she lost hope in realising her second dream.

In 2006 Maha got married to a wealthy and kind man. On their second day of marriage he bought her a car. She was over the moon and we were so delighted for her. We were so happy to see her realising both dreams.

That car summed up Maha’s personality. In the car you find a travel gear, a drum and a tape/CD recorder with a selection of music and songs including Julio [Iglesias], Sarya al-Sawas (pop singer associated with decadent art), Abdel Halim Hafiz and Majida al-Roumi. Thus, Maha was happy with her marriage, car and with her baby girl who was born in 2007.

Then came the year 2011, bringing along the wind of the Arab Spring. Protests kicked off in the city of Idleb and Maha was among the first to take to the streets. Instead of a drum and travel gear she started carrying bottled water and sweets to hand out to protesters. Often I used to accompany her. I watched protesters in large numbers and I heard them chant peacefully. I saw the placards they carried and the songs they sang. In a loud powerful voice they called for one thing: ‘The people want to topple the regime..

Back then protests followed a certain pattern. Before anything, bikers, positioned at the front, examined the route. They were then followed by men, youths and women. This order of events served to keep protesters safe. Motorists flanked both sides of the protest, also for safety reasons. In case of deployment of tear gas or live rounds drivers would rush the wounded to hospital or smuggle protesters out to safety. Maha used to do exactly that and that is why she became known as the lady with the blue car.

One day her husband needed to use her car. He came back laughing. In a proud tone he told her: Many protesters to whom I was a complete stranger stopped me to say: God bless your wife. She is a fine feisty sister. They recognised me from your car, he said to Maha.

In the 10th or 11th month, manifestations of armament began to surface. The number of martyrs and detainees also began to rise. I along with Maha and other girls volunteered and formed a group tasked with visiting and assisting families of martyrs and detainees. We ran a fundraising campaign which was mainly supported by family and friends, notably expatriate Syrians who supported the revolution. Their faith in us and support was very refreshing. They actually made us feel that we were not alone in our confrontation against the regime, and that every Syrian who believed in the revolution would find a way to support it. For the first time we felt that as Syrians we were united. Of course all this happened in deep secrecy to avoid detentions.

Just before the end of 2011, revolutionaries decided to celebrate the New Year in solidarity with our Christian brothers. They decorated Al-Sa’ah Square with bells and dazzling trees. Some revolutionaries dressed as Father Christmas. In a speech, a young Christian man said neither the regime nor any other power could undermine the ties of brotherhood and friendship between us. We cheered him, we ululated and we chanted: One, one, one, the Syrian people are one.

Raya, Maha’s daughter, who was dressed as Father Christmas handed out sweets to everybody. Young protesters passed her from one shoulder to another as she chanted: The people want to topple the regime. As I watched I thought: The apple does not fall far from the tree.

We were happy and optimistic. Statements coming out of the international community stressing that President Bashar al-Assad must go, and the Arab League’s proposition for Faruq al-Shara to sit as the head of an interim Syrian government signaled hope and made us think that the regime’s end was approaching.

But on March 10, 2012 the regime’s army carried out an incursion into the city of Idleb. The Free Syrian Army could not repel this massive deployment. Consequently, the regime’s army captured Idleb and tightened its grip on the city. That brought an end to the protests. We went quiet. Maha went quiet too. We were petrified and morale was at rock bottom. We put our hope in God, trusting God to save us and to avenge our martyrs.

On November 4, 2012 at 2pm Maha was stopped and detained at a military security checkpoint. My cousin took me to see an official at one of the security branches. In his office I heard him speak with the head of the military security branch and say: Brigadier General, this lady is from a respectable and well-known family. Al-Sayyid Issa family will not sleep tonight with their daughter in detention. Please spare us the headache. She must sleep at home tonight. To avoid getting into trouble with the locals at 9pm Maha was indeed freed.

During interrogation they pressed her for information about me. Therefore, the next morning we headed to Lattakia where we stayed for a while. We asked for a transfer and fate had it that I was transferred to a secondary school in Al-Ziraah neighborhood, known for being extremely loyal to Assad. Maha was transferred to a school in opposition Al-Raml neighborhood; a place where you can still read ‘freedom… freedom’ on the walls.

Ghada al-Sayed Issa, 59, is from Idleb. She currently lives in Gaziantep in Turkey. She holds a BSc in physics and chemistry from the University of Aleppo. She has one daughter