During the days of the final goodbye, the walls of Aleppo, full of words hurriedly written by its fleeing residents, became the focus of the world’s view — words far from sophisticated, but beating with love in the hardest of times 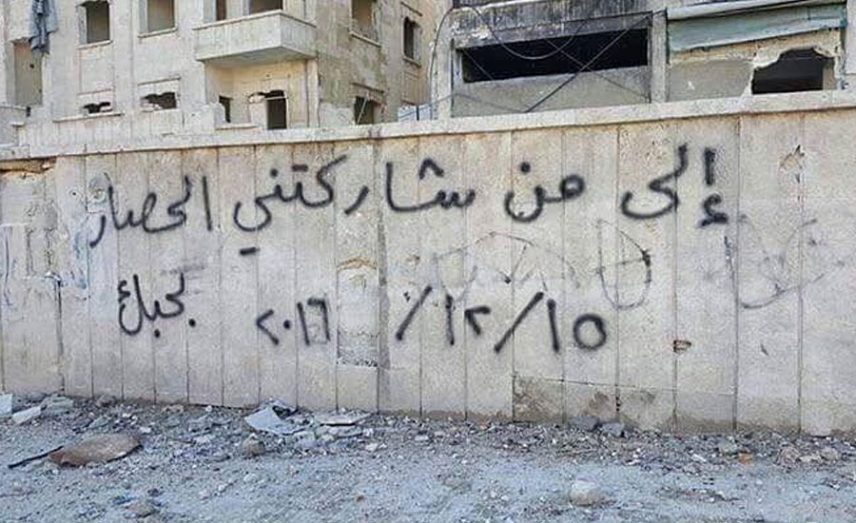 Syrians have left Aleppo but they left full of love. “To those who shared my siege… I love you. We are returning, my love. We still want freedom. We want to live, and you will leave,” Aleppo’s residents wrote on the walls of their city, in their final goodbyes to their hometown, a city the world had gathered together to destroy, but which insisted on being proud and unbending.

In the time of war, everything becomes possible, and in Aleppo alone it was possible for everything to end and for love to remain. Those who sang, “Oh you going to Aleppo, my love goes with you,” would have been more true if they sang, “You leaving Aleppo.”

During the days of the final goodbye, the walls of Aleppo, full of words hurriedly written by its fleeing residents, became the focus of the world’s view — words far from sophisticated, but beating with love in the hardest of times.

The young man Saleh, one of Aleppo’s residents, appeared alongside his wife and behind them the expression, “To those who shared my siege, I love you.” Saleh says, “The last days were harder than anyone could imagine, because of the severe lack of food, in addition to the shelling and the cold and the fear of what will come next. My wife was beside me and we drew strength from one another, especially given that we had never left Aleppo.”

Saleh, who is now outside his embattled city, continued: “Through writing this, I wanted the world to see that we love life and not violence, and that we hope and desire and plan to return — that this is not a permanent displacement. Aleppo and its people have been subjected to evil the likes of which history has never seen. Many people died and there were no funeral homes for them. Some lay for hours on the ground without being buried.”

Saleh has refuted rumors that some women in the city had committed suicide, telling news organizations the stories were fabricated and not true and that it may have been to raise and sharpen sympathies. He said the reality was that this was not the case: “The women of Aleppo are steadfast, thorns in the sides of tyrants.”

On the other side, the logistical director of the aid organization Afkar Foundatin, Talal Damour, is determined to remove about 755 children from inside the city, speaking by phone to those trapped inside explaining that he will work to bring them to a safe place within hours.

Dar al-Mamayazin, the orphanage in the besieged city of Aleppo was home to about 755 children. They were cared for by the house for years before it had become the target of air bombardment and another bite in the mouth of the ravenous siege.

Damour told Souriatna: “They were speaking with me, and they were frightened. I was trying hard to give them promises that we will get them out of Aleppo, because staying there has become impossible. We’ve prepared a place for them in Idleb province, and on Wednesday evening they informed me that they had packed their bags to go, and that they had burned everything so that the regime and its allies couldn’t benefit from it. They burned the machines and equipment and a lot of logistical items. But on the next day they were surprised to find out they would not leave Aleppo, after Iran delayed the operation. This was a big shock. They stayed for a full day out in the open in difficult weather conditions. But, thank God, we were able to go the day before yesterday and receive them, and now they are in a safe place.”

Between the images of Saleh and his wife in Aleppo and the images of Dar al-Mamayzin for orphans, one timeline divides between love and life, in the city of Aleppo, where the militias of the regime and its allies are taking their revenge. The green buses arrive with their nightmare which has come to occupy the minds of Syrians, and end the Aleppans’ dream of liberating the city from the regime’s control and military rule.