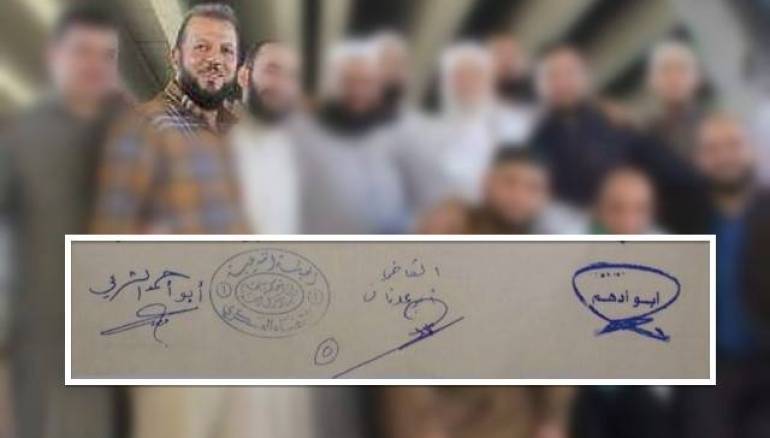 A series of investigations and court decisions issued by the Aleppo Sharia Commission (established by the Nusra Front and Ahrar al-Sham) has raised questions regarding the Commission’s attitudes and approaches to its work, its ruling principles, and the extent of its influence on areas outside regime control.

According to documents obtained by Zaman al-Wasl, Huthaifa Derkel was accused of handing three people over to the Assad regime to be conscripted into the Syrian army in March 2013 and of conspiring with a regime agent. The Commission considered Derkel’s actions “a manifestation for infidels” that should be punishable by “death”, but the sentence was drastically reduced to imprisonment for two years.

Derkel was stopped and questioned by Commission representatives in February 2016 and later admitted to the charges brought against him. The case against Derkel was strengthened after his associate, Khalouk Hallak, testified that the accused told him to hand three people from the Al-Qasas family to the regime security forces.

Based on Hallak’s admission, the Sharia Commission issued an order — signed by judges Abou Ihsan and Abou Abdullah al-Sharii — to execute Derkel after finding him guilty of the charges. Then on March 23, 2016 Derkel’s sentence was amended to only two-years imprisonment and 30 lashes on the head at the beginning of every month. Three other judges signed off on the reduced sentence: Abou Adham, Abou Adnan, Abou Ahmad al-Sharii (Mounir Zammar).

It was Mounir Zammar who suggested the ruling be changed and convinced the court to adjust the sentence. The new sentence issued by the judges says that the Commission took the decision to modify the death sentence offering a series of justifications, among them the “extreme naivety” of the convicted, and that capital punishment exceeds the crime committed.

Regardless of the correctness of either decision, the investigation raises questions about the ways the Commission manages cases of civilian abuse in one of the most important areas outside regime control.